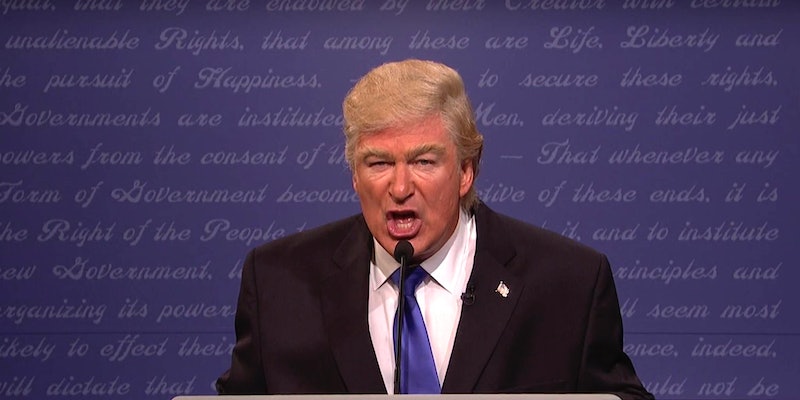 If you're among the millions who look forward to Alec Baldwin's Donald Trump impersonations on Saturday Night Live each week, you're going to love this. Alec Baldwin just went full Trump with a new book, titled You Can't Spell America Without Me: The Really Tremendous Inside Story of My Fantastic First Year as President Donald J. Trump. Baldwin will co-write his Trump book with Reset author and Studio 360 host Kurt Andersen.

Baldwin began impersonating Trump on the weekly sketch-comedy show in October 2016, taking over for frequent SNL-Trump Darrell Hammond. Following the general election, Baldwin said he planned to continue satirizing the notoriously thin-skinned Trump "as much as I can."

Regarding his book-writing partnership with Andersen, Baldwin tells The New York Times that "it’s fair to say that Kurt will do most of the writing," adding: "We have that arrangement whereby he doesn’t put on the wig, I don’t open up a Word document." Baldwin will narrate the audio version of his upcoming book in his Donald Trump persona.

You Can't Spell America Without Me: The Really Tremendous Inside Story of My Fantastic First Year as President Donald J. Trump is currently slated for release in November 2017 from Penguin Press.