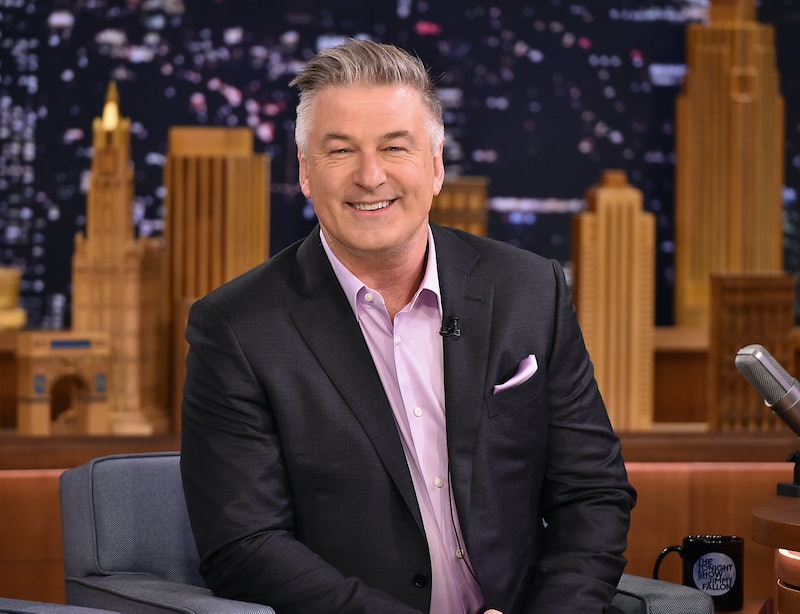 Alec Baldwin is certainly no stranger to Saturday Night Live, especially this season. His recurring impression of President Donald Trump has drawn rave reviews — and criticism from the commander-in-chief himself. But on Feb. 11, the actor hosted the NBC series for a record 17th time and Alec Baldwin's SNL monologue focused mostly on his big achievement. The actor stayed away from the topic of the president and only vaguely referenced Trump, saying "I know you've seen a lot of me this season."

"I'm proud to say that 17 times is the all-time record [for hosting]," Baldwin told the audience during the monologue, focusing on his hosting record rather than the president. SNL castmember Pete Davidson joined him on stage and congrulated him, as Baldwin reviewed some of his greatest sketches on the show. Davidson joked about how he's too young to remember or recall some, but complimented Baldwin on how handsome the actor looked back in the '90s. Davidson said that Baldwin was "looking like a young NBA coach" in a photo of Baldwin's first SNL monologue, which occurred back in 1990.

Baldwin continued his trek down memory lane, showing photos from two other classic SNL sketches that involved Baldwin: his 1996 impression of Robert DeNiro on a Joe Pesci Show sketch and the infamous 1998 NPR sketch, known to most fans as "Schweddy Balls." Baldwin showed a clip of a previous SNL monologue he did with a young Jimmy Fallon, in which the future Tonight Show host predicted that he will host a big-time show by 2011.

The only other reference Baldwin made to his Trump impression was a photo displayed as an SNL bumper.

So indeed, Baldwin is proving that he's more than just his Trump impression, which is a relief. Sure, the actor's impression has captured international attention, including that of the president himself, but Baldwin has been an SNL legend long before he pursed his lips and donned a blonde wig as Trump. And the show is definitely reflecting that so far.

Watch the monologue in the video below.