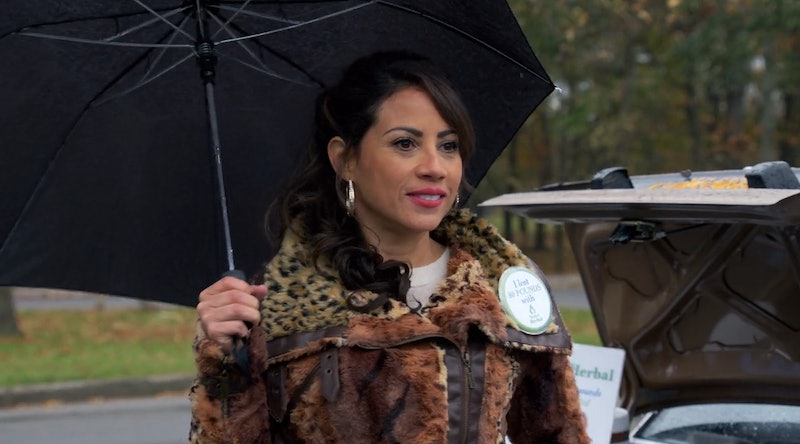 Spoilers ahead for Orange is the New Black Season 6. With all the ladies locked up Max for the foreseeable future, Orange is the New Black Season 6 had more time to show viewers what life was like on the outside for Aleida Diaz, who was released from Litchfield before the riot. From flashbacks in previous seasons, it was clear that Aleida was never a perfect parent, getting involved with drug dealer Cesar and leaving daughter Daya to fend for the rest of the family (and eventually get caught up with Cesar herself). But Season 6 shows a determined and desperate mother, trapped in an unforgiving system that makes it nearly impossible for her to break out. Aleida's experience on Orange is the New Black Season 6 is all about getting a job to get her kids out of foster care to no avail. In fact, her fictional story this season illustrates the all-too-reality for many parents when they get out of the criminal justice system.

Aleida's first appearance in Season 6 happens in Episode 4, "I'm the Talking Ass." While the episode gets its name from Nichols's ballsy bat mitzvah flashback speech, it can sort of apply to Aleida's story, too. As she gets thrown out of what's clearly one in a string of failed job interview attempts, she meets a woman selling Nutri Herbal, a fictional pyramid scheme of vitamin supplements. By the end of the episode, Aleida is driving away with a car full of the stuff, talking back to the voice on the tape recording that's supposedly teaching her how to peddle nutrition shakes. Who's the talking ass now?

Despite her obvious efforts to sell as much Nutri Herbal as she can, Aleida still can't make ends meet. At the state-mandated Social Services parenting class, she explains that she needs a job where she makes enough money to afford a three-bedroom apartment — one room for her, one for her son, and one for her girls, according to a law that mandates kids of different genders have their own rooms. It’s a pretty raw deal, given that she can’t seem to get a job because of her criminal record and the infamously astronomical cost of rent in New York City. Even the parenting classes keep her stuck listening to a man drone on for hours when she could be picking up shifts somewhere to save up for a deposit on a place.

Aleida's circumstances aren't being exaggerated for dramatic effect. In fact, in reality, getting your children out of foster care can be even more stressful than what Aleida explains. According to New York State law on child welfare, as put forth in the 2012 report "Children of Incarcerated Parents in New York State," if a former inmate "has failed for a period of either one year or fifteen out of the most recent twenty-two months… substantially and continuously or repeatedly to maintain contact with or plan for the future of the child," they can have all of their parental rights terminated. In plain English, this means if Aleida doesn't adequately "plan for the future" within the next 15 months, she could lose her kids forever.

According to the "Children of Incarcerated Parents in New York State" report published by New York State in 2013, 17 percent of formerly incarcerated mothers do wind up having their parental rights terminated.

The government website on child welfare published data from the Adoption and Foster Care Analysis and Reporting System, which revealed that 19,858 children in the U.S. in 2013 entered the foster care system due to the incarceration of a parent. If it's the mother that's incarcerated, as in Aleida's case, the kids are five times more likely to wind up in the system than if it's the father.

According to the New York State Department of Corrections and Community Supervision's "Under Custody Report," published in the Times Union, 23,500 inmates were released from prison in 2012, and 10,000 of those people had returned to prison within three years. Of the newly released inmates, the majority of those that returned with a new criminal conviction found themselves embroiled in fresh drug-related charges.

While it's heartbreaking to watch Aleida and Daya dive back into the world of drug dealing that could tear their family further apart, it's easy to see how it happens. Aleida is under serious time constraints to make enough money to develop a permanency plan — three bedrooms in the Big Apple! — for her kids, and she's seriously limited in her options. While her exact case might be fictional, it's all too real for so many women and children trapped in the loop of incarceration and foster care, respectively. Orange is the New Black might just be a TV show, but hopefully it helps to raise awareness and ultimately inspire change when it comes to criminal rights.

More like this
The 'Black Bird' Stars Are Both Heading Back To Apple TV+
By Brad Witter
Anthony Templet Wants To “Live Normally” After Killing His Father
By Brad Witter
Where Is Charlie Evens Now?
By Morgan Leigh Davies
Netflix Reveals First Look At Wednesday In The 'Addams Family' Spinoff Series
By Bustle Editors
Get Even More From Bustle — Sign Up For The Newsletter