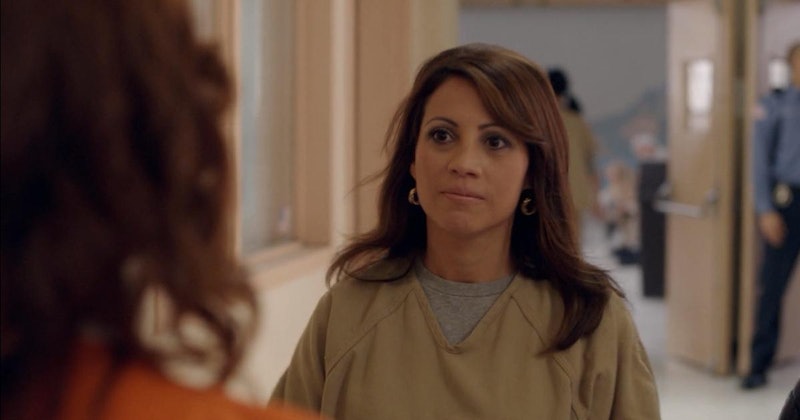 If you have been watching Orange is the New Black Season 4, you may be wondering where Daya's baby is. With Daya in prison, Bennett out of the picture, and her stepdad, Cesar, going to jail himself, who has her daughter? Well, right now the state does. With no one to care for the child, it's likely she was put in foster care along with Daya's mom's children. But, there's hope yet. Spoilers ahead for OITNB Season 4. Her mom, Aleida, found out in Episode 4 that she's getting out of prison early, and she's dedicated to fixing her life and getting her kids back. But, could Daya's mom also get her baby on Orange Is the New Black ? I have faith that if she does, she'd do right by her.

Before leaving prison, Aleida swore to Daya that she would try to get her baby out of the system and help raise her. First, she has to get a job and a home and prove to the state that she's been rehabilitated, but I believe she can. Aleida studied hard while in prison so she could take the G.E.D. and find a job to care for her kids. She also left a dangerous living situation to move in with Cesar's girlfriend, because she knows she needs to be in a stable home, even though Aleida doesn't necessarily want to live with her boyfriend's girlfriend.

It seems that Aleida is willing to make sacrifices to put her life back together, and hopefully she can prove that she deserves to have her children back and Daya's daughter too. I think she's ready to embrace being a mom and raise the children better than a foster home could. Since the finale showed Daya holding a gun on a C.O., she could get more years added to her sentence. She's going to have to count on her mom to raise her daughter while she can't.