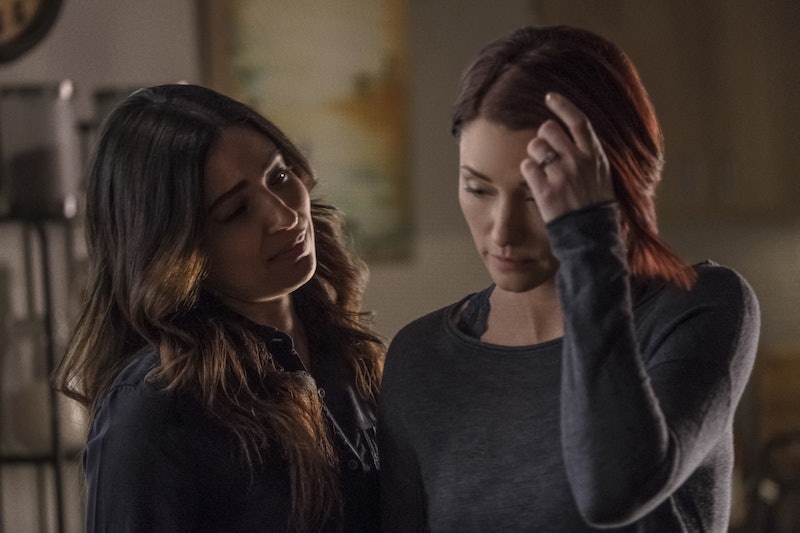 One of TV's most fan-favorite couples just reached the end of the road. Tonight's episode of Supergirl, aptly titled "Damage," packed quite an emotional punch for Alex (Chyler Leigh) and Maggie (Floriana Lima), as both badass women realized the issue of whether or not they wanted to have children couldn't be resolved with a compromise. Alex knew she would always start a family when she found the person she wanted to spend the rest of her life with, while kids weren't in the cards for Maggie. The women, who spent all of this season engaged to be married, finally laid their cards out on the table and broke up, breaking the hearts of "Sanvers" fans everywhere.

It was a breakup that was a long time coming, as news of Lima's reduced role on Supergirl before this season began filming signaled that Sanvers was destined for a hard road ahead. And then as the topic of children came up and Maggie made it clear to Alex that she didn't want kids, Alex tried to be okay with that. Before long, however, she realized how much having kids meant to her, and the inevitable end didn't hurt any less knowing it was coming, both for fans of the inspirational lesbian characters and the actors portraying them.

"It's a heavy episode. I mean there's no way around that, and just say what it is. It is a breakup," Leigh tells Bustle along with a small group of reporters on the Supergirl set in Vancouver. "And honestly, in a lot of ways, it felt like a genuine breakup. I love Floriana to pieces. She's amazing. What we were able to do together for the community, but also for just like our friendship and being able to establish such strong characters, I mean that goes beyond how many episodes we do together, you know what I mean? I'm incredibly grateful for that."

Sitting underneath the dim lights of the alien dive bar set, Leigh almost gets choked up as she recalls filming that breakup scene, directed by Kevin Smith. In fact, knowing how much the Sanvers relationship means to fans as most lesbian relationships end tragically in pop culture and don't get that much representation, Smith actually approached the big moment delicately. He set up a separate table read for the episode just for Leigh, Lima and the showrunners, away from the rest of the cast, to make sure it was handled in the best way possible.

"Kevin really liked to make sure that we do this really well, and so, he took Flo and I aside, and we did the table read just with us and [executive producers] Andrew Kreisberg and Jessica Queller," Leigh says. "Wanted to make sure that the words were right, but the intention was right and the heart behind it was right. Either way, any way you roll the dice, it's not going to be easy, and it's something that everybody felt."

It was quite an emotional experience filming the scenes, because Smith decided to shoot them all in one day. That's one long day of tears and heartbreak! "It was a hell of a day. It really was," Leigh says, revealing with a laugh she had "a lot of wine by the end of the day."

"Because it was so deep and so heartfelt, it was tough," she says. "But ... it's not like absolutely closure because no one ever knows exactly what's going to happen."

Because Lima had limited availability this season, she was only contracted for five episodes, according to Leigh.

"I know that just sounds like words, but it really does just come down to that," Leigh says. "If she can come back, I know we would all love to have that happen. So if she's available, that would be fantastic."

All the actors found out about the break up during the summer hiatus, and Kreisberg was the one who told Leigh.

"There's so much that needed to go into it to be done as delicately as Alex's story coming out story was," she says. "You had to approach it with the same delicacy to end this particular chapter in Alex's life. It doesn't mean that Alex isn't still a lesbian. It doesn't mean that Alex's journey ends there. It means that this is a loss, but also a gain for herself and understanding who she is."

Because of the problematic "Bury Your Gays" trope where lesbian characters, after finding happiness in a relationship, die at an alarming rate. The Supergirl showrunners always made it clear that no matter what, Maggie and Alex wouldn't die and add to that awful trope. However, they never made promises that the Sanvers relationship would last forever, and Leigh agrees that a promise like that would be unreasonable.

"No relationship is ever going to be guaranteed. They're a hell of a lot of hard work," she says. "For the two of them, I really feel like what we were able to do with the Sanvers story, how much awareness we were able to give – and still are – we can't talk about it like now it's gone. There's still going to be remnants of that. There's still so much positivity, and there's still so much growth and so much freedom for so many people that came from this [storyline], that it's going to continue on."

The issue of kids breaking up a strong relationship is nothing new when it comes to TV storylines, but that's because it's such a real and honest impasse. "There are certain things that you're either always going to want or you're never going to want," Leigh says. "In this case with kids, that's a pretty big deal. This is a life-changing thing one way or another. When you have decisions like that, when you come across obstacles that are that big, you really have to choose what's going to be best for you, individually. Alex would never wish anything but the absolute best for Maggie and vice versa."

That's why the break up is so heart wrenching and tragic, because there is no other option for either ladies. If they want the best for each other, that means the ability to either have kids or not have kids.

"It's not like [there's] screaming, you're throwing vases around the room. You really see that the intention there is to allow them to be their best selves no matter what," Leigh says. "I feel like we did a really good job with that."

But she knows that most fans will still have a hard time with the storyline, because of how Sanvers is one of the few lesbian relationships on TV that has been responsibly represented, and had the hope of a happily ever after in the end.

"I've kind of been avoiding social media today, only because I'm still trying to figure out how to really answer this for a lot of fans that I know personally and that I've come across that might not totally understand it," Leigh says. "I want to make sure that people know that regardless, they're loved and that they matter and that the story that they have to tell is just as important as the story we told on the show and that that continues for them as well. Nothing ends tonight."

While Alex and Maggie are no longer together, Leigh promises that Supergirl isn't going to stop telling meaningful LGBTQ stories with Alex.

"That's the biggest thing that I've been so worried about is that I don't want people to think that this is the end of something really, really significant and important," she says. "It is really just the beginning in a lot of ways. I hope people can latch on to that and hang on to that. Maybe I'm biased – but what we did I feel was pretty groundbreaking, and to have such a strong relationship portrayed as well as we did, I think we did a very great justice to that storyline and for the community."

She clasps her hands and continues, "The hope, honestly, is just that people can see what it was and celebrate that just as much as I do and I know Flo does, and really be able to grow from here and just see what comes next for Alex."

In the immediate future, that means "ice cream, pizza and couch scenes" with Alex and her sister Kara (Melissa Benoist) as they both cope with broken hearts.

"Alex has a very hard time of really dealing with things so the episode that we see after tonight's episode is when Kara and Alex go back to [their childhood home in] Midvale," Leigh says. "It's a really, really cool flashback episode where you see kind of the initial dynamic between Kara and Alex and how that was really difficult for them in the beginning and what the catalyst was for the turn in their relationship."

Going home to "figure some stuff out" was the pause that Leigh wanted for Alex in the aftermath of the break up. "This is the first time Alex ever really said, 'I love you,' to anybody, let alone get engaged and have wedding talking and all that stuff," she says. "We had a lot conversations about saying that and keeping that authentic, and what that would look like in reality."

Thankfully it sounds like Supergirl is handling Alex's break up with the same gravitas as her coming out story and first lesbian relationship. If nothing else, fans can trust that much.