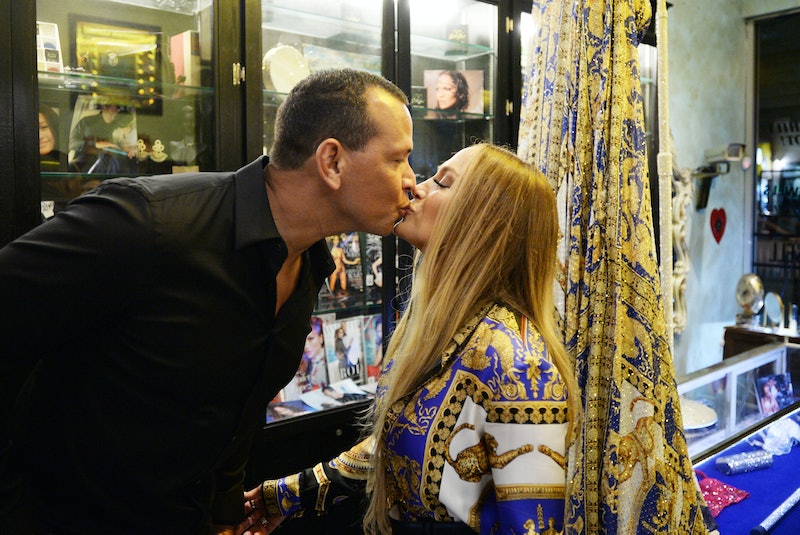 If you're prone to dramatic swooning, you might want to go ahead and find the closest fainting couch before proceeding. Consider yourself warned. This is not an exaggeration. Alex Rodriguez's anniversary post for Jennifer Lopez is legitimately *that* sweet, as E! News reported earlier this week. The couple have officially been making hearts melt for two years now, and their loving relationship shows no signs of slowing.

On Feb. 4, Rodriguez shouted out his superstar lady in a lengthy Instagram post filled with sincerity. The post included not one, not two, not three, but 10 — 10! — photos of himself, Lopez, and both of the stars' kids.

You should definitely click through all of them yourself, but there are for sure a few stand-outs. Like, for example, there's one snap of the pair en-route to Lopez's Second Act premiere, where her pink, tulle Giambattista Valli Haute Couture gown is hilariously taking up the majority of the space inside their vehicle. She's mid-laugh, he's like "Can you believe how big this thing is?" and it's pretty adorably candid.

"Macha 13, I can’t believe it’s been two years," Rodriguez began his Instagram tribute to Lopez. "Only 730 days, which have flown by, but it feels like we have been together forever. We are meant to be, and how much you mean to me cannot be put into words."

A-Rod then listed some of the couple's most memorable moments, adding, "We have done it all together and every moment with you is cherished. Where this road will take us next is unknown but there is no one else I would rather have by my side. The journey is just beginning and I am excited for what’s ahead." If you haven't swooned yet, just wait — there's more.

The former athlete began to wrap up his anniversary post by giving Lopez all the praise for her "hard work ... relentless drive and determination," which Rodriguez said "push me to be a better man each and every day." Hearts. Are. Melting.

"Like you there is none other. Words will never do justice to what the last two years have meant to me. Thank you for always being you, for your unwavering support and unconditional love. Te amo mucho, Lola."

Lopez posted her own anniversary dedication to Rodriguez earlier this week, complete with five photos and an equally lengthy ode. In part of her tribute, Lopez wrote, "You make my world a more beautiful safe and stable place... in the midst of our ever-changing, ever-moving life... you make me feel like a teenager starting out all over again." Hearts. Are. Melting ... Again.

Lopez and Rodriguez were first rumored to be dating in early 2017. They made their red carpet debut as a couple at that year's Met Gala, and these days, it's kind of hard to imagine one without the other.

Whether they're out in public, doing interviews, or just sharing posts on social media, they've long-given fans an intimate glimpse into their relationship. They're clearly a perfect match, and their constant support and love for one another is definitely something to aspire to.