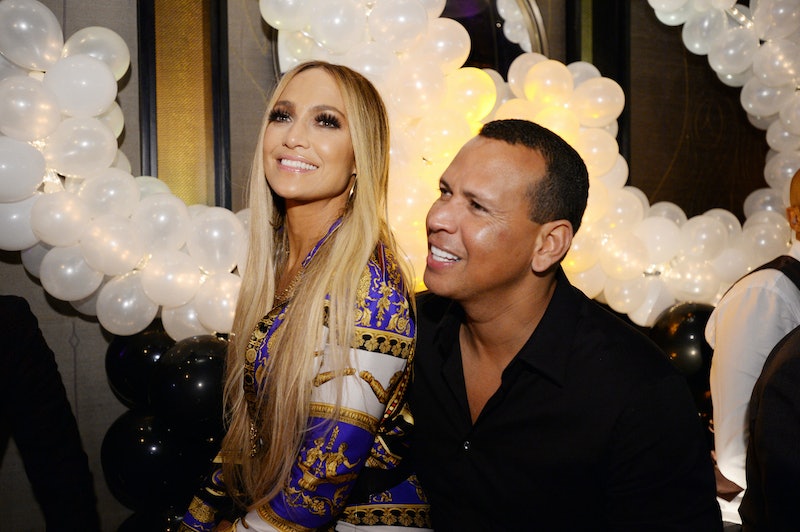 It's undoubtedly a bit of a touchy subject for any couple planning to walk down the aisle: Should the guest list include former partners? Would that be weird if they actually show up? Who knows. It's different for everyone. However, Alex Rodriguez's feelings about inviting exes to his wedding with Jennifer Lopez are incredibly chill, as the athlete recently revealed during an appearance on GMA 3: Strahan, Sara and Keke. Like, the guy could not come off as more go-with-the-flow in the best possible way.

Rodriguez sat down with the hosts of GMA 3 on Sept. 10, and eventually, the conversation turned to his upcoming nuptials. Sara Haines basically begged him to give them some details about what his and Lopez's big day will entail, and he had a pretty hilariously great response.

OK, there's probably a little bit of truth in that statement. There's no way that he doesn't actually know where the wedding is taking place or what he's wearing, though. The hosts of GMA 3 weren't buying it either, and continued to press A-Rod for info with a wedding Q&A game called, "This Or That."

Believe it or not, the game they played actually ended up getting Rodriguez to reveal a decent amount. One of the more interesting moments, though, was when he was asked, "Exes invited to wedding or ex-free zone?"

After taking a moment to consider the question — which, to be fair, was a bit of a toughie, seeing as how it's probably more like, a case-by-case kind of thing — Rodriguez responded in a way that seemed truly genuine. "I would say exes invited to wedding," he shrugged. "All inclusive. The more the merrier."

The Q&A session also revealed how and he Lopez plan on handling their first dance. "Standard slow dance or something big and choreographed?" Strahan inquired. "Standard," Rodriguez replied. "Jen doesn't choreograph anything. She's a savant when it comes to all that stuff." Yeah, that seems about right.

In general, A-Rod seems like he's pretty relaxed about his upcoming wedding to Lopez. Still, though, he did admit that it'll probably be an emotional day. "I didn't think I was a crier," he said, when asked whether he or Lopez will shed the most tears. "But when I see my daughters do things I end up crying over nothing. And it's crazy. I think it's a dad thing. But I think we'll both shed some tears."

As for what else we know about their big day, Lopez recently revealed that it'll be happening in the very near future. Well, kind of. "Soon," she said in a kick-off video for It's My Party tour. "Soon. Not soon soon, but next year."

So, will all of their exes score an invite to Rodriguez and Lopez's 2020 wedding? Who knows. It'll no doubt be a beautiful celebration either way.