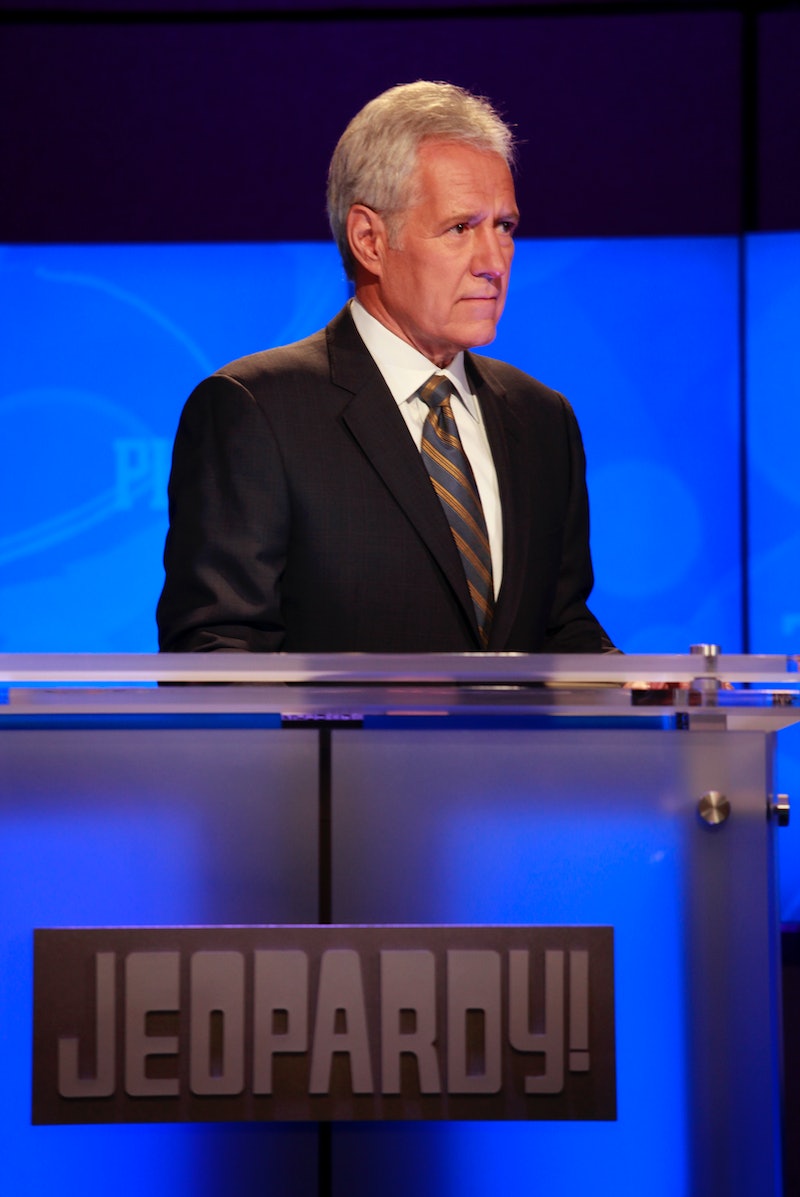 The goal of Jeopardy may usually be to win as much money as possible, but on Monday, Nov. 11, that incentive took a backseat, giving Alex Trebek an emotional Jeopardy moment he won't soon forget. It happened when contestant Dhruv Gaur decided to wager $1,995 of his $2,000 earnings during the Final Jeopardy round. But since he didn't know the correct answer, he opted to use the opportunity to send the Jeopardy host a heartfelt message of support in the wake of his ongoing cancer battle.

“Did you come up with the right one? No?” Trebek asked Gaur just before his answer was displayed on the screen. “What is: ‘We love you, Alex.' Oh, that's very kind. Thank you," the host said upon reading Gaur's answer. And while Trebek did his best to keep things professional, he definitely appeared to get choked up from the moment. However, that didn't stop him from carrying on with his hostly duties, immediately informing Gaur that his kind gesture "Cost you $1,995. You’re left with five bucks."

It didn't take long for the moment (and Trebek's reaction) to go viral on Twitter, which made the hashtag #WeLoveYouAlex become a trending topic of the evening.

In fact, the instance gained so much traction that it prompted Gaur to take to Twitter in order to provide some background information about what ultimately led to his decision.

According to Gaur's account, Trebek had just informed the contestants that he was about to reenter treatment for his cancer. And while Gaur admitted that he could've tried harder to figure out the answer in the Final Jeopardy round, he just couldn't stop thinking about the beloved host the entire time. "[I] just kept thinking about Alex, and thought he should know," he wrote. And if he could go back in time, he'd still do the same thing all over again. "I’m very grateful I got the opportunity to say what I know everyone was thinking," he added.

Trebek first revealed that he had been diagnosed with Stage 4 pancreatic cancer back in March. After undergoing chemotherapy, he claimed to be "near remission," telling People that "some of the tumors have already shrunk by more than 50 percent." But, unfortunately, his road to recovery hasn't been as smooth as he would like, and in September, he confirmed to Good Morning America that he was undergoing chemotherapy again.

Regardless of what happens, Trebek has most of the world in his corner, rooting for his recovery. And that's something that no amount of money could buy.

More like this
Andy Cohen Apologized To Larsa Pippen After A 'RHOM' Season 5 Reunion Dust-Up
By Brad Witter
'Bachelorette' Vet Clare Crawley Unveiled 2 Special Wedding Day Accessories
By Stephanie Topacio Long
'Bling Empire: New York' Star Nam Laks Is The “Blair Waldorf Of Thailand”
By Alyssa Lapid
We Finally Have Some Answers To How Heather Gay Got A Black Eye On 'RHOSLC'
By Samantha Rollins
Get Even More From Bustle — Sign Up For The Newsletter
From hair trends to relationship advice, our daily newsletter has everything you need to sound like a person who’s on TikTok, even if you aren’t.