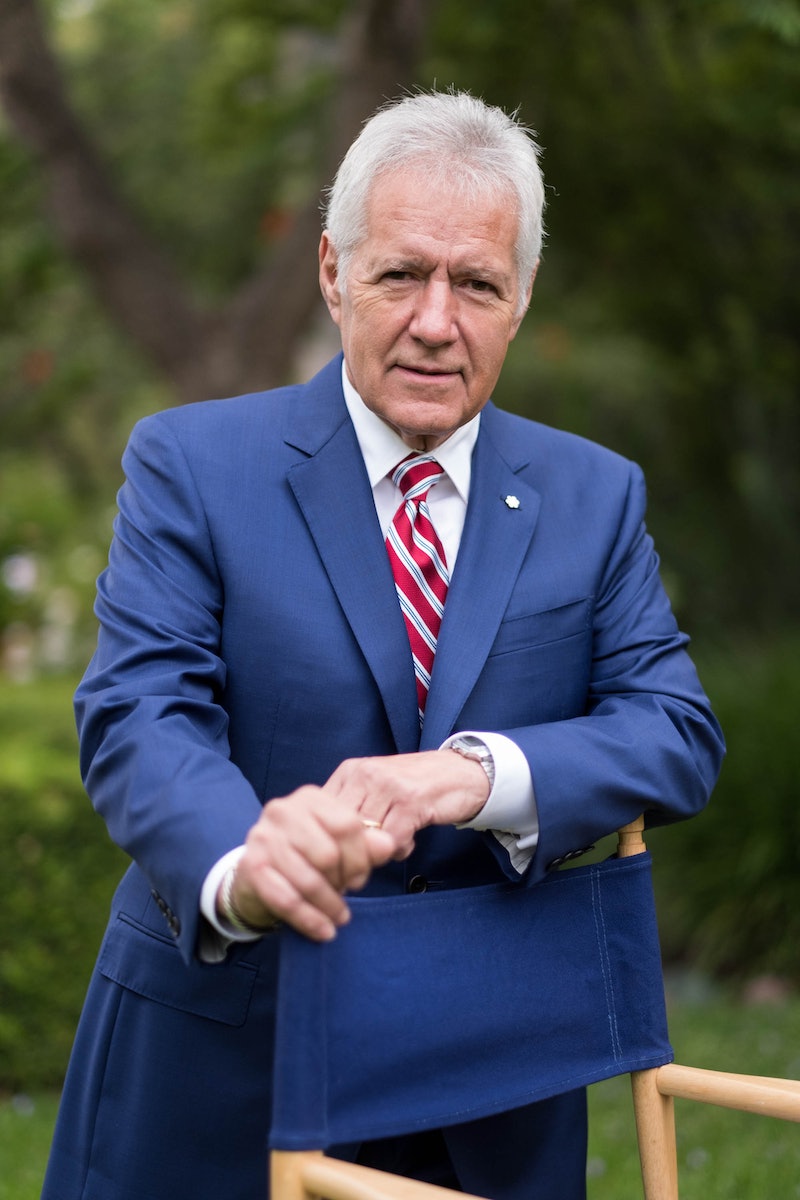 If you've been wondering how the Jeopardy host is doing since revealing in March that he's battling Stage 4 pancreatic cancer, there's a new Alex Trebek health update. The famous game show host spoke with Good Morning America on Sept. 17 and revealed he's undergoing chemotherapy again. The news isn't what Trebek was hoping for, but the 79-year-old is trying to remain as upbeat as possible.

In May, Trebek shared positive cancer news. Not only did he reveal that his tumors shrunk greatly, but that he was in "near remission." At the time, he told People, "It’s kind of mind-boggling. The doctors said they hadn’t seen this kind of positive result in their memory…some of the tumors have already shrunk by more than 50 percent."

Following that great news, Trebek told GMA that he stopped chemo and began immunotherapy. "I was doing so well and my numbers went down to the equivalent of a normal human being who does not have pancreatic cancer, so we were all very optimistic," he explained. "I lost about 12 pounds in a week and my numbers went sky high, much higher than they were when I was first diagnosed. So the doctors have decided that I have to undergo chemo again and that's what I'm doing."

In March when he first revealed his cancer battle, Trebek vowed to beat the disease. "Normally, the prognosis for this is not very encouraging," he told fans directly in a video. "But I'm going to fight this. And I'm going to keep working. And with the love and support of my family and friends and with the help of your prayers also, I plan to beat the low survival rate statistics for this disease."

Overall, Trebek's tried to remain as positive as he can about having stage 4 pancreatic cancer. But, like he told GMA, there are days where he understandably becomes sad. "There are moments when, for no reason at all, I feel this surge of sadness, depression," he admitted. "It doesn't last very long, but it just takes over my whole being for a short period of time. I understand it more now so I can deal with it a lot better than I did before."

Trebek also said he really does have optimism, especially because he's "still here." He admitted he's not afraid to die either. "Hey, guys, I'm 79 years old. I've had one helluva good life and I've enjoyed it." He continued telling GMA, "The thought of passing on doesn't frighten me. It doesn't. Other things do. The effect it will have on my loved ones. Yes, that bothers me. It makes me sad. The thought of myself moving on, hey folks, it comes with the territory."

At this point in time, and despite going through another round of chemo, Trebek continues doing what he loves — hosting Jeopardy. He told GMA, "As long as I can walk out and greet the audience and the contestants and run the game. I'm happy."

Trebek also appreciates fans' messages of support. When speaking to People in May, he said, "I’ve got a couple million people out there who have expressed their good thoughts, their positive energy directed towards me and their prayers." He even credited his improvement at that point in time to all of the love he's received. "I told the doctors, this has to be more than just the chemo, and they agreed it could very well be an important part of this. I’ve got a lot of love out there headed in my direction and a lot of prayer, and I will never ever minimize the value of that."

Trebek's uplifting attitude through such a difficult journey is truly infectious. He continues to be an inspiration to many. And as he keeps fighting this battle, there's no doubt the well wishes and support will keep coming.

More like this
Jay-Z Is Performing At The Grammys, Meaning Beyoncé Might Actually Show Up
By Jake Viswanath
18 Photos Of Jennifer Lopez’s Mansion You Can Now Buy For $42.5 Million
By Alyssa Lapid
Vanessa Hudgens Is Reportedly Engaged To Cole Tucker
By Jake Viswanath
This 'One Tree Hill' Wardrobe Error Is Going Viral On TikTok
By Brad Witter
Get Even More From Bustle — Sign Up For The Newsletter
From hair trends to relationship advice, our daily newsletter has everything you need to sound like a person who’s on TikTok, even if you aren’t.