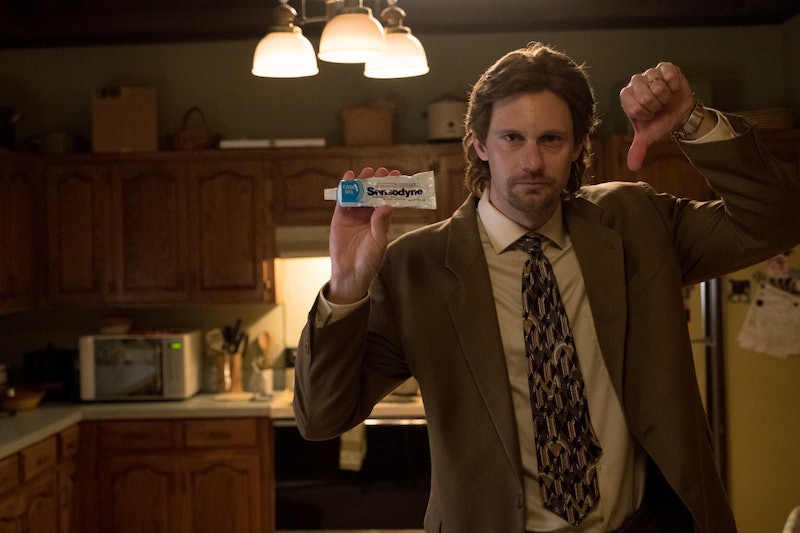 The show spends a significant amount of time exploring Travis' reasoning for pursuing FAM and quitting his J-O-B, and establishing his relationships with his wife and Cody, his immediate superior in FAM's pyramid-style business structure. By the time that he starts heading home after quitting his job in a dramatic fashion and giant white moose scares Travis into the lake, the audience has no reason to believe he's actually going to die.

When he erupts from the water unscathed, it simply seems that the totaled car will just be another piece of bad news he'll have to tell Krystal about. Besides, what kind of show would kill off the show's only Emmy-winning actor in the very first episode? On Being A God in Central Florida, that's what kind of show!

For whatever reason, Alexander Skarsgård seems to be making a habit out of portraying television characters that die in Season One. Skarsgård found massive success as the role of Perry Wright in Big Little Lies, for which he won an Emmy, so perhaps he's trying to one-up that role by dying in the series' pilot instead of holding his death off until the season finale. Much like Perry, it seems that Travis' death won't keep him away from the series as the show will have ample opportunities to feature him in flashbacks, or possibly even visions like the one Travis sees that causes him to swerve into the alligator lake in the first place.

Once an alligator chomps Travis into bits, the tone of the series immediately changes, and the stakes skyrocket. On Becoming A God becomes more than a tale of a suffering wife who tries to get her husband to give up his ill-advised American dream, instead morphing into a dark revenge tale as Krystal formulates a plan to bring down the company that stole her husband from her. At the beginning of the episode, Krystal simply wants to be able to pay her mortgage — but by the end she is out for blood.

She ends the show's premiere by taking a shotgun to some wild alligators, but how long before she turns that same gun towards the leaders of FAB? Travis' death may have been shocking and surprising, but it's what the show needed to do so it could better serve Krystal's story and firmly Kirsten Dunst as the show's center of gravity.