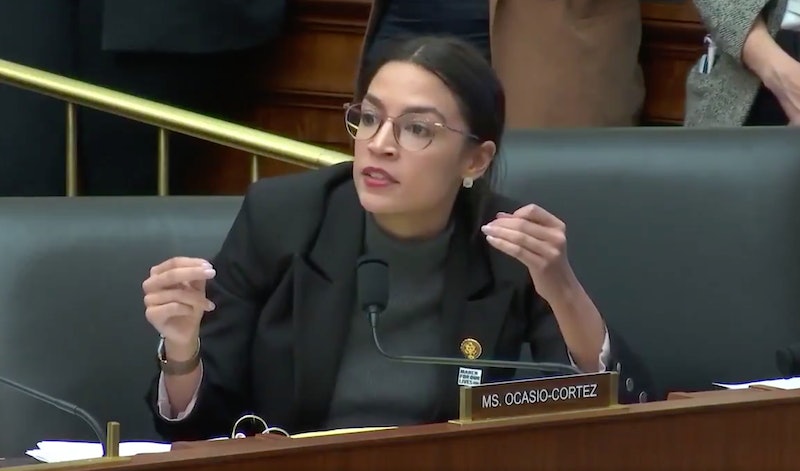 Attention is back on the Green New Deal this week after Senate Majority Leader Mitch McConnell held a vote on the resolution that many Democrats dismissed as a political stunt. The deal was also discussed on the House floor, where GOP Rep. Sean Duffy called it elitist. In response, Rep. Alexandria Ocasio-Cortez defended the Green New Deal with a fiery speech about how climate change affects the poorest and most marginalized communities.

During a House Committee on Financial Services meeting on Tuesday, Duffy argued that the deal is only appealing "if you're a rich liberal," which he described as people who nominally support environmental protection but also take private jets to the annual World Economic Forum in Davos, Switzerland. "Look at the cost increases the Green New Deal will have on poor American families," Duffy said.

"You want to tell people that their concern and their desire for clean air and clean water is elitist?" Ocasio-Cortez asked her Republican colleague. "Tell that to the kids in the South Bronx [who] are suffering from the highest rates of childhood asthma in the country. Tell that to the families in Flint, whose kids have their blood... ascending in lead levels."

She added that "their brains are damaged for the rest of their lives. Call them elitist. You're telling them that those kids are trying to get on a plane to Davos?"

The video of Ocasio-Cortez's speech was shared by journalist Brian Tyler Cohen on Tuesday as well as many others on Twitter. Cohen's clip quickly went viral and had raked up around 8 million views by Wednesday afternoon.

The Green New Deal would require the United States to almost completely get rid of greenhouse gas emissions and transition to entirely renewable energy by 2030. It would invest in zero-emission vehicle manufacturing, affordable and clean public transit, and high speed rail.

Some of its demands are not overtly related to the environment, but are meant to take advantage of the massive economic overhaul to otherwise improve the lives of everyday Americans. The deal calls for guaranteeing all citizens health care, adequate housing, access to higher education, and a job with a wage that can sustain a family.

Ocasio-Cortez and Democratic Sen. Ed Markey introduced the deal to Congress in February. Many of the 2020 Democratic presidential candidates have co-sponsored it, including Sens. Elizabeth Warren, Kamala Harris, Cory Booker, Kirsten Gillibrand, and Amy Klobuchar.

McConnell put the Green New Deal up for a vote on Tuesday to get members of Congress on the record as either supporting or opposing it, as Vox reports. Most Democrats voted "present" as a show of protest against McConnell's action, which took place before a hearing had even been held.

Ocasio-Cortez said Tuesday that she had encouraged the "present" votes.