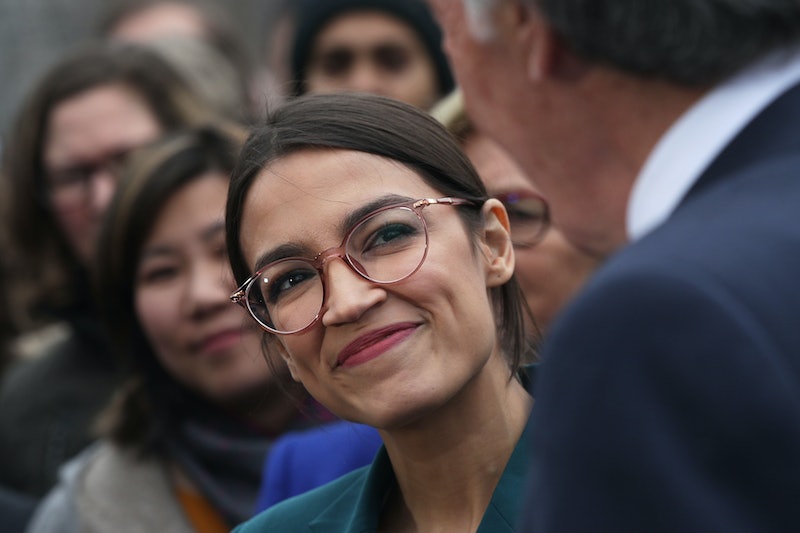 In 2016, campaign rallies for Donald Trump were heavily sprinkled with chants of "lock her up," a reference to jailing Trump's then-rival Hillary Clinton. As Trump looks to 2020, a race Clinton won't feature in, his supporters have grappled to settle on a new slogan. On Thursday, it appeared they'd found one: "AOC sucks." Rep. Alexandria Ocasio-Cortez has responded to the "AOC sucks" chant, however, labeling it as the Trump campaign's attempt to find another female villain.

"You know this is part of a pattern that the right and the far-right and, frankly, the president is consistent with," CNN reported Ocasio-Cortez told reporters Friday. "He doesn't have another woman — Hillary Clinton or whoever else — to vilify anymore, so they need to find another woman to kind of prop up and become a lightning rod."

A chorus of "AOC sucks" broke out at a Trump campaign rally in Grand Rapids, Michigan, on Thursday as the president's eldest son Donald Trump Jr. sought to warm up the crowd for his father by digging into Democrats. "Think about the fact that every mainstream, leading Democratic contender is taking the advice of a freshman congresswoman who three weeks ago didn't know the three branches of government," Vox reported the younger Trump said in reference to 2020 Democratic candidates' support for Ocasio-Cortez' Green New Deal. "I don't know about you guys, but that's pretty scary."

The younger Trump then offered a prolonged pause, smiling and nodding as the crowd began the "AOC sucks" chant. "You guys, you're not very nice," Vox reported he said in a sort of mock admonishment. "And neither is what that policy would do to this country." The president's eldest son later re-tweeted a video clip of the moment to his official Twitter account.

A spokesperson for Ocasio-Cortez also dismissed both the chant and the younger Trump in a statement to The Washington Post. "I don't watch garbage television, so I was unaware of it," the paper reported Ocasio-Cortez's spokesperson, Corbin Trent, had said. "When reality TV gets into the White House, then things get a little weird, don't they?"

But although Trump's supporters appeared to try out a new campaign slogan on Thursday with chants of "AOC sucks," they didn't appear ready to fully abandon their old standby. As President Trump called for both the media and any officials who'd encouraged Special Counsel Robert Mueller's Russia investigation (which he called "the single greatest hoax in the history of politics in our country") to be held accountable the crowd erupted first into chants of "lock her up" before quickly segueing into "lock them up."