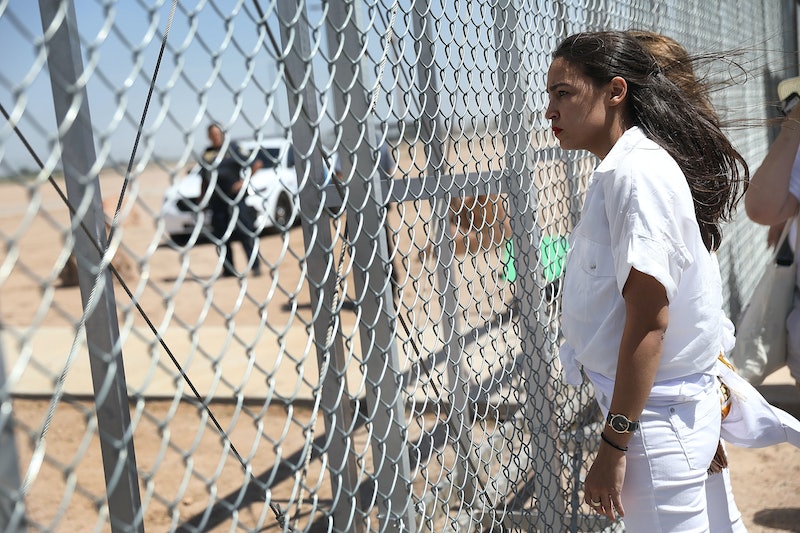 On Monday, ProPublica published a stunning report about a secret Facebook group for current and former Customs and Border Protection (CBP) employees. The Facebook group is reportedly laden with violent, sexist, and xenophobic content, including verbal and photographic attacks against sitting congresswomen. Among those named in the group is Rep. Alexandria-Ocasio Cortez, who responded to the CBP Facebook group on Twitter, describing the posts as reflective of a "violent culture" within the agency.

"9,500 CBP officers sharing memes about dead migrants and discussing violence and sexual misconduct towards members of Congress," Ocasio-Cortez tweeted on Monday afternoon. "How on earth can CBP’s culture be trusted to care for refugees humanely?"

Ocasio-Cortez had a scheduled visit to a border patrol facility on Monday. She visited along with Rep. Veronica Escobar. According to the ProPublica report, some members of the CBP Facebook group encouraged officers at the facility they were visiting to throw "burritos" at the Congresswomen, both of whom are Latina.

"They’re threatening violence on members of Congress," Ocasio-Cortez tweeted. She asked, "How do you think they’re treating caged children+families?"

Ocasio-Cortez still went on her planned visit to the Border Patrol facility. She described meeting migrants held in cages, who she said were not given water and drank out of toilets.

"It’s not just the kids. It’s everyone," Ocasio-Cortez tweeted. "People drinking out of toilets, officers laughing in front of members Congress. I brought it up to their superiors. They said 'officers are under stress & act out sometimes.' No accountability."

CBP tells Bustle that the agency has begun an investigation into the Facebook group. Bustle has also reached out to CBP for comment on Ocasio-Cortez's statements about detainees drinking water from toilets.

“These posts are completely inappropriate and contrary to the honor and integrity I see — and expect — from our agents day in and day out," U.S. Border Patrol Chief Carla Provost says in an emailed statement to Bustle. "Any employees found to have violated our standards of conduct will be held accountable."

Throughout Monday afternoon, Ocasio-Cortez live-tweeted her experience visiting border facilities. She described what she saw during the visits as "horrifying."

"This has been horrifying so far," she tweeted on Monday. "It is hard to understate the enormity of the problem. We’re talking systemic cruelty w/ a dehumanizing culture that treats them like animals."

ProPublica's report on the Facebook page served to fuel ongoing criticism against CBP, largely regarding how it views and treats undocumented migrants who cross the southern border.

"Where Old Patrol meets New Patrol," reads the secret Facebook group's description, according to screenshots published in the ProPublica report. "Funny, serious and just work related. We are family, first and foremost. We are here for each other. Remember you are never alone in this family."

An unnamed staffer for Escobar told ProPublica that the posts targeting her and Ocasio-Cortez were "vile and sexist."

“Furthermore, the comments made by Border Patrol agents towards immigrants, especially those that have lost their lives, are disgusting and show a complete disregard for human life and dignity," the staffer added.