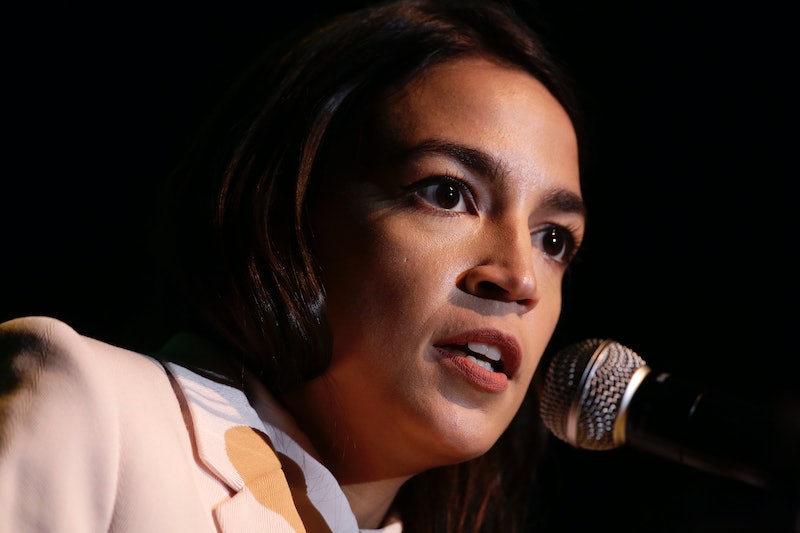 Over the last week, politicians and commentators have been embroiled in a battle over language as it relates to immigration. And in one of the most recent chapters of that controversy, Alexandria Ocasio-Cortez responded to criticism after she said Immigration and Customs Enforcement centers amount to concentration camps, according to The Hill. Specifically, Ocasio-Cortez fired back after House Minority Leader Rep. Kevin McCarthy said that she should apologize for making the comparison, arguing that he was the one with apologies to make, The Hill reports.

Over the last year, the Trump administration has faced nearly nonstop criticism over its handling of migrants crossing the U.S.-Mexico border. That criticism was intensified after a group of lawyers told news outlets that children were living in allegedly unsanitary conditions at a Texas border facility, as reported by the Associated Press and The New York Times. Bustle has reached out to Customs and Border Protection for comment.

In an interview with the AP, acting Customs and Border Protection Commissioner John Sanders said child medical care should be improved in the facilities. He also noted that CBP is well over capacity, as it is currently holding 15,000 people; capacity is 4,000. He is urging Congress to pass a bill that would provide more money for operations.

After the reports came out, some opponents began to describe such facilities as concentration camps, including Ocasio-Cortez, according to Vox. Critics, in turn, have said such language is an insult to survivors and victims of the Holocaust.

"To take something that happened in history where millions of Jews had died, and equate it to somewhere that's happening on the border, she owes this nation an apology," McCarthy said on Thursday, The Hill reports.

"I think Congresswoman AOC needs to apologize," McCarthy said, per The Hill. "Not only to the nation but to the world. She does not understand history."

Illegal border crossings have been a predominant topic in U.S. political discourse for years, but the issue was amplified when then-candidate Trump made combating them a key issue during his campaign. At the time, most rhetoric centered around whether or not the United States would construct a new border wall. But after the administration announced its "zero-tolerance" policy last spring, attention has largely shifted toward conditions undocumented migrants face after being apprehended at or near the southern border.

Ocasio-Cortez has become one of the most vocal opponents speaking out against conditions migrants face when they are detained.

"Reminder this admin is CHOOSING to round up refugees seeking asylum, fighting to not give children toothpaste or soap & making people sleep on dirt floors," she tweeted on Saturday. "They say it’s bc of a lack of [money]. You know what saves money? Not putting masses of people in internment in the first place."

At the same time as border facilities are facing increased scrutiny, the president has promised to increase deportations. He made the announcement in a tweet sent last week, although he backtracked his remarks a bit over the weekend, writing: "At the request of Democrats, I have delayed the Illegal Immigration Removal Process (Deportation) for two weeks to see if the Democrats and Republicans can get together and work out a solution to the Asylum and Loophole problems at the Southern Border. If not, Deportations start!"

As tensions continue to flare over problems at the U.S.-Mexico border, there is no clear end in sight. In the meantime, reports indicate that those detained at the border continue to face precarious, unsanitary living conditions.