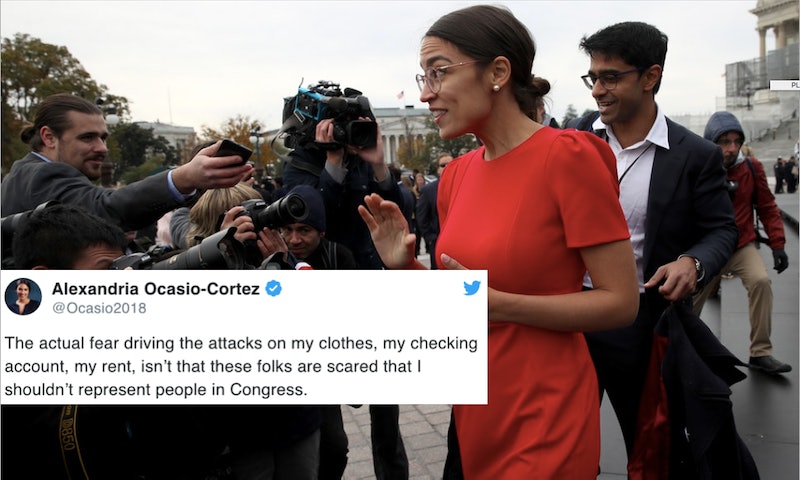 It's been less than a month since she won her race, but one of the youngest women ever elected to Congress has found herself under near-constant scrutiny. Not one to keep quiet, however, Alexandria Ocasio-Cortez has responded to critics on Twitter, yet again, eviscerating those who have attacked the 29 year-old for her finances.

"The actual fear driving the attacks on my clothes, my checking account, my rent, isn’t that these folks are scared that I shouldn’t represent people in Congress," she wrote on Tuesday. "It’s fear that they’ve allowed their riches, their privilege, + their bias to put them to a point where they can’t."

Ocasio-Cortez's finances have become a renewed point of interest since she told The New York Times earlier this month that she would be unable to afford an apartment in Washington D.C. until her congressional salary kicked in. Critics jumped on this statement immediately, scrutinizing her publicly available financial records — and even her clothes — in an attempt to prove that she had been misleading.

The congresswoman-elect faced another round of this on Tuesday, after her communications director revealed that she had somewhere in the vicinity of $7,000 in her savings account, according to CNBC. In 2017, according to a public disclosure, Ocasio-Cortez made nearly $26,600. She worked in the food industry at the time.

But Ocasio-Cortez argued on Twitter that her income and savings are reflective of average Americans, like the ones that she was elected to represent.

"My dad died when I was 18, my mom scrubbed toilets + drove drove schoolbuses, I bartended to help her, and still won a Congressional primary at 28," she tweeted. "I’ll take my family over a fat bank account any day, and my experience makes me a better legislator. I am the people I work for."

In her self-defense, Ocasio-Cortez also took a swipe at President Trump, pointing to a New York Times investigation that dug into Trump family tax history.

Although there has been a wave of discussion regarding Ocasio-Cortez's financial situation, this is not the first time that it has made headlines. After she won her primary earlier this year, a radio show host shared an image of a house in Yorktown Heights that Ocasio-Cortez lived in while she was growing up, describing it as "a far cry from the Bronx hood upbringing she’s selling." He also incorrectly stated that she attended Brown University.

Ocasio-Cortez quickly responded, telling the naysayer to get his facts straight. "Hey John, 1. I didn’t go to Brown or the Ivy League. I went to BU. Try Google," she wrote. "2. It is nice. Growing up, it was a good town for working people. My mom scrubbed toilets so I could live here & I grew up seeing how the zip code one is born in determines much of their opportunity."

She also accused the critic of trying to strip her of her family, home, story, and identity, which she said was "exemplary of how scared you are of the power of all four of those things."

Ocasio-Cortez has faced a tremendous amount of scrutiny for a person who has yet to take office. And as both a history-maker and a norm-breaker, it's unlikely that it will taper off any time soon. But if her responses in the last several months are any indication, she seems well-equipped to stand up for herself.