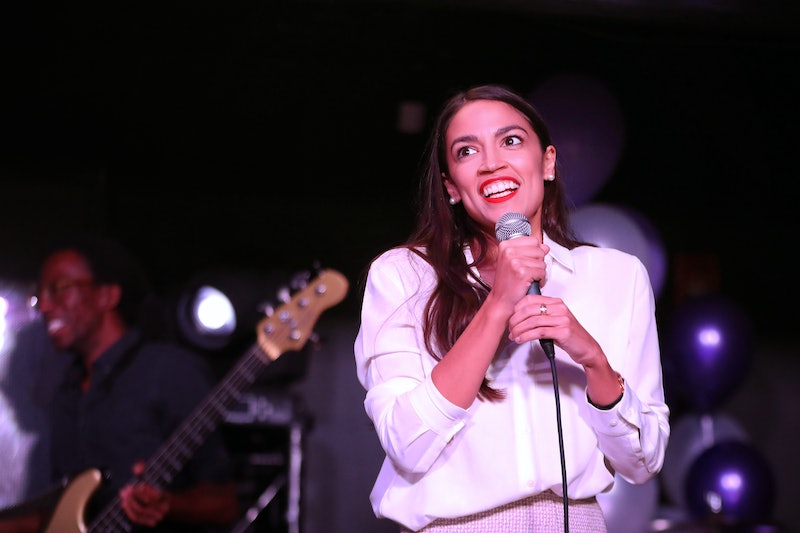 Democratic New York Rep. Alexandria Ocasio-Cortez stood by Rashida Tlaib in tweet calling out Republican "hypocrisy" regarding Tlaib's recent comments about impeaching President Donald Trump. During a party on Thursday night, Tlaib told the crowd about a conversation with her son. "When your son looks at you and says, 'Momma look, you won, bullies don't win,' and I said, 'Baby they don't,' because we're going to go in there and we're gonna impeach the motherf*cker," she said, according to Politico.

Beyond Thursday's comments, this was not the first time Tlaib publicly endorsed impeachment proceedings. In fact, on Thursday, Tlaib had published an op-ed on why Congress should begin impeachment proceedings, co-written with Free Speech For People president John Bonifaz, in the Detroit Free Press. Quickly, Republicans — including Trump — condemned her use of the curse word. "I thought her comments were disgraceful," Trump told reporters on Friday, according to The Hill.

"Republican hypocrisy at its finest: saying that Trump admitting to sexual assault on tape is just 'locker room talk,' but scandalizing themselves into faux-outrage when my sis says a curse word in a bar," Ocasio-Cortez wrote on Twitter. "GOP lost entitlement to policing women’s behavior a long time ago. Next."

"I got your back @RashidaTlaib - the Bronx and Detroit ride together," Ocasio-Cortez wrote in a follow-up tweet.

Responses to Tlaib's comment were divided — mostly along party lines. House Minority Leader Kevin McCarthy of California called it an attack on the president. "Look at the brand-new elected congresswoman and her language of what she says to her son in a rally that she thought was private last night," McCarthy said on Fox & Friends. "Their whole focus here is to try and attack this president when we’re trying to move America forward."

While Press Secretary Sarah Huckabee Sanders told Fox News that impeachment isn't possible. "You're not going to impeach this president when he's had two of the most successful years that any president has had in modern history," Sanders said. "The only reason they want to come after this president is because they know they can't beat him. They can't beat him when it comes to a policy debate, and they're not going to beat him when it comes to 2020."

House GOP Chair Liz Cheney also condemned Tlaib's use of "foul language" at a press conference on Friday, calling it a "real ramp-up in rhetoric and name-calling," according to ABC News.

"You've had name-calling. You've had references to Hitler. You've had very foul language used and accusations of the necessity to impeach," Cheney said, according to ABC News. "So we're in a situation where the Democrats are clearly bringing into this office as they take charge, a level of rhetoric, a level of attack, a level of vitriol that's not good for the country."

Despite the criticism, Tlaib remained steadfast on Friday. She tweeted, "I will always speak truth to power. #unapologeticallyMe." If tweets aren't official enough, her office also released a statement. "Congresswoman Tlaib was elected to shake up Washington, not continue the status quo. Donald Trump is completely unfit to serve as president. The Congresswoman absolutely believes he needs to be impeached," Tlaib's office said in a statement, according to CNBC. "She ran and won by making this very clear to the voters in her district."