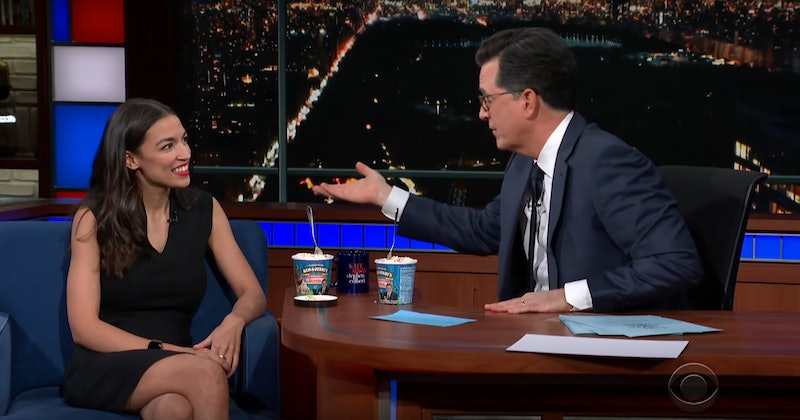 The Late Show With Stephen Colbert
By Lani Seelinger
Jan. 22, 2019

New York's freshman congresswoman has received far more media attention than most members of the House of Representatives, including those who have held their seat for far longer. The millennial lawmaker, however, has had an apt response for the criticism she's received from both sides of the aisle. Alexandria Ocasio-Cortez told Stephen Colbert her response to being told to wait her turn, and it signals that waiting is not what she went to Congress to do.

“I want to ask this question in a respectful manner, knowing also that you’re from Queens, so you will understand this question," Colbert said to Ocasio-Cortez on Monday's The Late Show, after bringing up the calls she's received from fellow Democrats to “wait your turn” and “go slow."

"On a scale from zero to some, how many f*cks do you give?” Colbert asked Ocasio-Cortez, to much laughter. “I think it’s zero," the congresswoman responded after thinking about it for a moment.

In addressing Democratic concerns about party unity, Ocasio-Cortez drew a parallel with another leader who pushed through them. “If you think activism is inherently divisive — I mean, today is Martin Luther King Day. And people called Martin Luther King divisive in his time," Ocasio-Cortez said. "We forget he was wildly unpopular when advocating for the Civil Rights Act. I think that what we need to realize is that social movements should be the moral compass of our politics.”

Ocasio-Cortez's appearance on Colbert also gave her a chance to discuss numerous other questions people might have for her. Those included, for example, what tips she gave older Democratic politicians about how to effectively use social media in the training crash course she was asked to lead.

“Rule number one is to be authentic, to be yourself and don’t try to be anyone that you’re not. So don’t try to talk like a young kid if you’re not a young kid,” she told Colbert. “Don’t post a meme if you don’t know what a meme is — that was literally my advice. And I said, 'Don’t talk like the Founding Fathers on Twitter.'"

Ocasio-Cortez also addressed her call for a 70 percent marginal tax rate on people who earn more than $10 million a year. As she noted on Colbert's show, her plan has drawn a considerable amount of fear-mongering in the right-wing media.

"When we talk on a 70 percent marginal tax rate, it's not on all of your income. It's on your 10 millionth and one dollar," Ocasio-Cortez told Colbert.

As she explained, the ongoing government shutdown has prevented her and the other freshman members of Congress from actually doing the work that their constituents elected them to do — but she certainly hasn't been wasting her time on Capitol Hill.

"The downside is that we’re not able to get to work as much as we want to in the beginning," Ocasio-Cortez told Colbert. "But the bright side is it gives us a lot more free time to make trouble.”