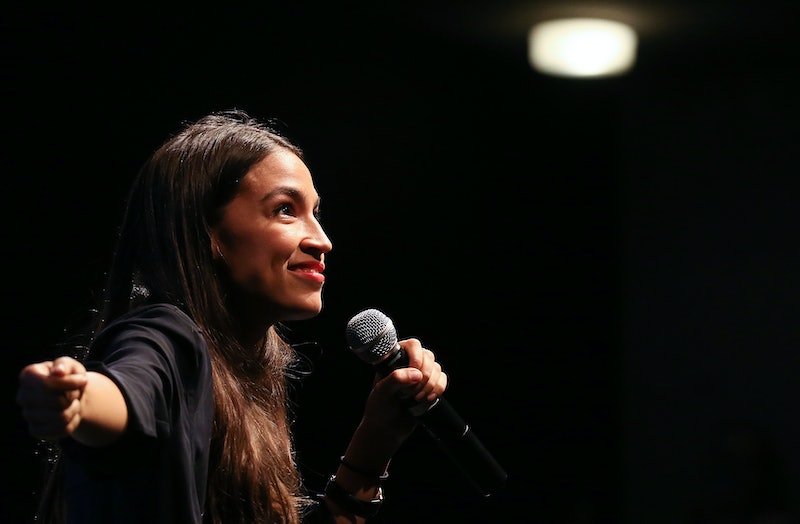 If anyone had any doubts about how the youngest congresswoman in history would communicate with her constituents, they've been answered. Alexandria Ocasio-Cortez's Instagram is one of many outlets that she is using to solidify her reputation as a Millennial who understands how to actually connect with American citizens. Though there's nothing necessarily new about politicians communicating via social media these days (hello, POTUS), the way that Ocasio-Cortez has been using her Instagram stories to track her beginning days at Congress is changing the game.

Every day, Ocasio-Cortez has been taking a series of Instagram stories that show the ins and outs of her schedule, from the congressional textbook she has to read to the snacks and communal spaces being offered to the freshman congressmen and women who don't have offices yet.

On Wednesday, Ocasio-Cortez posted an Instagram story that explained what she has to do leading up to January. This includes creating a budgeting strategy, making "strategic hires," and creating an overall plan for herself in the coming year. She also pointed out that Congress is given an attending physician that congressmen and women can "opt into" with their paycheck, writing, "the more you know."

Ocasio-Cortez wrote in one post, "One of the most rigorous aspects of planning is deciding EARLY what our priorities are in how we want to lead...For example, would you rather have a congressmember with an amazing local services office, or one that leads nationally on issues?"

She then created an Instagram poll to ask which option her followers would prefer; 65 percent chose the option of a congresswoman who prioritizes legislation over local services.

In her Instagram stories, Ocasio-Cortez also pulls the curtain up on all of the mundane and surprising details of congressional life. From riding in buses filled with congressmen and women "like a HS field trip," to receiving a real-life "freshman yearbook" of all the incoming people to Congress, to getting a "swag bag" at orientation for Congress, Ocasio-Cortez has taken her followers with her for every step of the journey.

Regardless of whether you agree with Ocasio-Cortez's political beliefs, there are two major benefits that her Instagram stories and posts provide to the average young person. First, Ocasio-Cortez is (arguably for the first time) turning the political universe into something tangible and approachable, making it seem possible for the average person to imagine themselves running for office.

Second, Ocasio-Cortez is providing real and valuable information about how Congress actually works, from the ground up. Not only do these efforts represent what is hopefully the beginning of a new movement toward increased transparency with constituents, but they also help to educate people on what the political process actually looks like, and what a person can reasonably expect from their congressional representative.

Ocasio-Cortez's desire to bring the political world to the immediacy of your phone is not accidental. In the past, she's spoken candidly about her desire to serve as the type of role model she didn't see for herself growing up. In an Instagram post in October, she wrote:

I think of that saying, "be who you needed when you were younger." When I was younger, I needed to see myself in others. I needed mentorship. I needed an example. I needed to believe that I could. Knowing that gives me the courage to overcome the doubt, the fear, and anxiety: the idea that if I do this, then maybe it will help someone else.

Ocasio-Cortez currently has 622,000 followers on Instagram, and that number is growing every day.

More like this
How Getting An Abortion Has Changed From The ’60s Through Today
By Amanda Chatel
For These Abortion Clinic Volunteers, Going TikTok Viral Is A Risk Worth Taking
By Audra Heinrichs
YouTuber Runs Into Margaret Sanger’s Grandson While Filming
By Alexis Morillo
Every Single Big & Small Way You Can Fight For Abortion Rights
By Tess Garcia
Get Even More From Bustle — Sign Up For The Newsletter