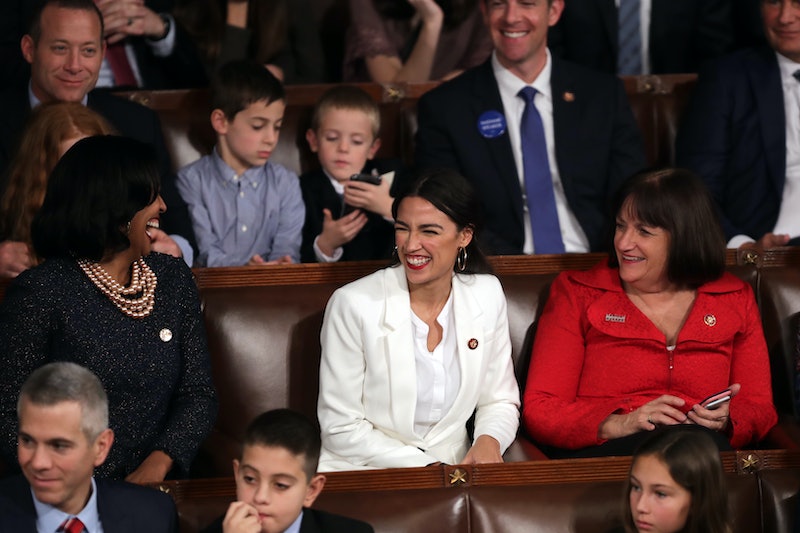 It seems as if Rep. Alexandria Ocasio-Cortez couldn't even get through her first day on the job without Republicans attempting to take a dig at her. According to the newly-sworn in congresswoman, House Republicans booed her as she cast her vote for speaker of the House on Thursday. But Ocasio-Cortez's message to Republicans who reportedly booed her makes it clear she's not bothered by her haters.

"Over 200 members voted for Nancy Pelosi today, yet the GOP only booed one: me," the newly-sworn in representative tweeted Thursday. "Don't hate me cause you ain't me, fellas."

While Ocasio-Cortez claimed she was booed by Republicans in the House chamber on Thursday, it's difficult to tell exactly what went down as she cast her voice vote for the next speaker of the House. In a C-SPAN video of the House's vote, it is possible to hear some sort of noise disturbance just after Ocasio-Cortez stands up and votes for Pelosi.

It could be a "boo." It could be a groan. It could be a collectively muttered "ugh." But whatever it was, it's impossible to tell from who or where the sound originated. In the C-SPAN video, however, Ocasio-Cortez and the Democratic colleagues sitting near her can be seen looking to another part of the House chamber and laughing in response.

Ocasio-Cortez isn't the only one to think she got booed by Republicans. On Twitter, host of The New York Times' The Daily podcast, Michael Barbaro, also alleged that "Republicans gently and playfully boo[ed]" as Ocasio-Cortez voted for Pelosi."

What's more, Ocasio-Cortez is, unfortunately, no stranger to attacks from conservatives. In the past, the New York congressional representative has been criticized for wearing a suit jacket and a coat, for living in a house as a child, and for having a nickname in high school.

In early December, Donald Trump Jr., the president's eldest son, also attempted to tear into Ocasio-Cortez when he attacked her using a meme that suggested the self-proclaimed democratic socialist's policies would lead to Americans eating dogs. More recently, the congresswoman was criticized by conservatives for having dared to dance while in college.

According to Bustle's Seth Millstein, some conservatives recently circulated an old video of Ocasio-Cortez dancing with several other Boston University students, claiming it was proof she didn't belong in Congress, among other things. The video was reportedly the students' lighthearted attempt at recreating a scene from The Breakfast Club, which, as Millstein pointed out, was a popular thing to do at the time.

In fact, Ocasio-Cortez has become the target of such frequent attacks that she reportedly began keeping a list of those she has said have "gone after" her since her election victory. In early December, that list included a former Republican vice presidential candidate, a sitting Republican U.S. senator, a former Republican governor, the U.S. senator that "killed the Public Option," and an "Entire Conservative Cable News Channel + YouTube universe."