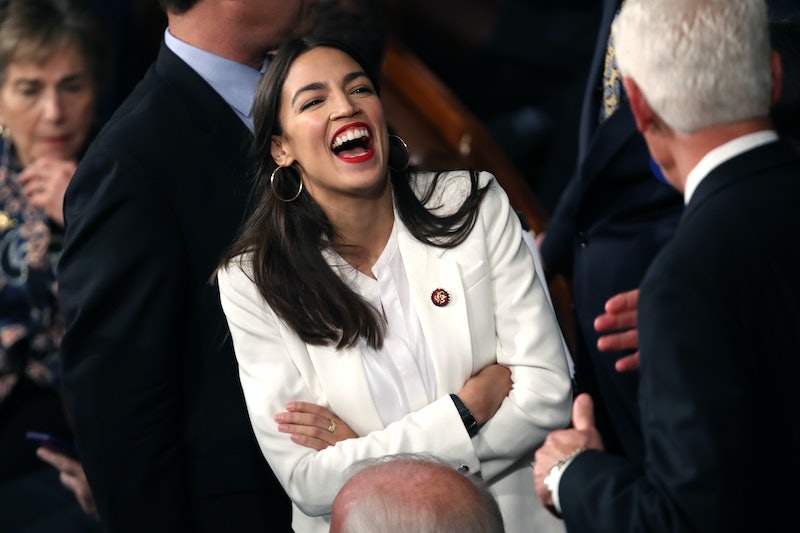 Women and people of color shattered records and made history on Thursday as they took their oaths of office and were officially sworn into Congress. Among them was Alexandria Ocasio-Cortez, the youngest woman ever elected to the House. Despite routinely facing criticism from Republicans, the New York Democrat has not shied away from her progressive politics, and Thursday was no different. Ocasio-Cortez's swearing-in outfit was a feminist tribute to everyone from Shirley Chisholm and the suffragettes to Sonia Sotomayor and other girls and women from the Bronx.

Many freshman officials paid homage to their cultures and traditions when they were sworn into office. Michigan Democrat Rashida Tlaib donned a traditional Palestinian gown — called a thobe — while New Mexico Democrat Deb Haaland wore a traditional Native American dress. Ocasio-Cortez, meanwhile, wanted to celebrate the work of past and present feminists by wearing all white.

"I wore all-white today to honor the women who paved the path before me, and for all the women yet to come," Ocasio-Cortez tweeted on Thursday. "From suffragettes to Shirley Chisholm, I wouldn’t be here if it wasn’t for the mothers of the movement."

According to Elle, Ocasio-Cortez's fellow Reps. Ilhan Omar and Madeleine Dean also chose to wear all white for similar reasons.

Ocasio-Cortez also chose to honor other girls and women who, like her, are from the Bronx. In another tweet on Thursday, she explained that she wore hoop earrings and red lipstick to her swearing-in ceremony precisely for this reason.

"Lip+hoops were inspired by Sonia Sotomayor, who was advised to wear neutral-colored nail polish to her confirmation hearings to avoid scrutiny," Ocasio-Cortez explained on Twitter. "She kept her red. Next time someone tells Bronx girls to take off their hoops, they can just say they’re dressing like a Congresswoman."

According to The Huffington Post, Supreme Court Justice Sonia Sotomayor was repeatedly advised by the Obama administration to avoid wearing a brightly-colored nail polish during her Senate confirmation process, but she did not relent. Ocasio-Cortez explained this in a tweet responding to Refinery29’s news and politics editor Ashley Alese Edwards, who tweeted earlier in the day that she planned to wear similar accessories everywhere she goes after seeing the New York Democrat do so:

Ever since she won her midterm race back in November, Ocasio-Cortez has used social media to be transparent about the electoral process. She has publicly responded to the many inaccurate attacks against her — in which members of the GOP have made allegations about her education and the home in which she grew up — and has posted Instagram stories answering her followers' questions about various policies.

Ocasio-Cortez has also been vocal in her advocacy for a climate change plan called the Green New Deal, and has celebrated the records set by her fellow freshman Congresswomen. Shortly before they were all sworn in, Ocasio-Cortez posted a photo with Omar, Haaland, Massachusetts Rep. Ayanna Pressley, and other women who made history by being elected to Congress, and these women have all made clear that they will not back down from their progressive politics.