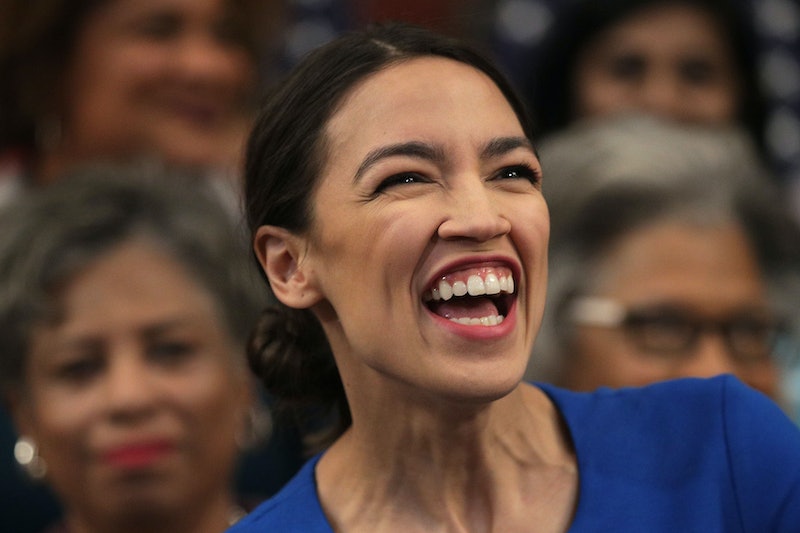 As the president's State of The Union (SOTU) address draws nearer, a number of Democratic members of Congress are lining up their guests to the annual message. While guests can be anyone, Congress members often extend invitations to those whose presence and stories they hope will highlight or remind people of a particular political point — and Rep. Alexandria Ocasio-Cortez is no exception. According to The Intercept, Ocasio-Cortez's SOTU guest will be the woman who's elevator confrontation of former GOP Sen. Jeff Flake went viral last year.

Ocasio-Cortez has invited Ana Maria Archila, the co-executive director of the Center for Popular Democracy Action who joined another woman in confronting Flake over his support of then-Supreme Court nominee Brett Kavanaugh in an elevator last year. Archila, who reportedly is a constituent of the progressive congresswoman, confirmed her invitation to Trump's SOTU address to The Intercept, telling the outlet she was "moved" by it.

"I just feel particularly moved that in her first participation in the State of the Union she is inviting me to join and inviting that moment of the elevator — my confrontation with the men who do not understand the life of women and the lives of people who are not in power — that she's inviting that into the imagination of people again," Archila told The Intercept.

In September, shortly after Flake announced his intention to vote in support of Kavanaugh's confirmation to the Supreme Court, Archila and Maria Gallagher confronted the Republican lawmaker as he stood in an elevator. In an impassioned speech they identified themselves as sexual assault survivors and said that in supporting Kavanaugh's confirmation, Flake was "telling all women that they don't matter."

"What you are doing is allowing someone who actually violated a woman to sit on the Supreme Court," Archila told Flake during the encounter. "This is not tolerable. You have children in your family. Think about them." (Kavanaugh has denied all of the allegations against him and he has not been charged with any crime.)

Hours after the encounter, Flake announced that he'd changed his mind and would no longer vote for Kavanaugh unless the FBI conducted an investigation into the allegations. Following the FBI's limited investigation, Flake ultimately voted in favor of Kavanaugh when the Senate took its final vote on his confirmation in October.

Ocasio-Cortez teased the reveal of her SOTU guest on Twitter last week, saying "Y'all aren't ready for NY-14's #StateOfTheUnion guest!" As a hint, the congresswoman included a picture of an enamel pin she'd bought for her guest, which bears the phrase "well behaved women rarely make history."

In comments to The Intercept, Archila said she'd "never felt so proud of voting for someone" than when she cast a ballot for Ocasio-Cortez in the midterms. "It was really a powerful experience to feel like I was voting for someone I one hundred percent believed in," she said. Archila also said she shares the congresswoman's commitment to fostering "grassroots power with people who are excluded from our democracy."

President Donald Trump is expected to deliver his second State of the Union to Congress on Tuesday. His annual address will come a little more than a week after he agreed to temporarily reopen the federal government following the longest government shutdown in U.S. history.