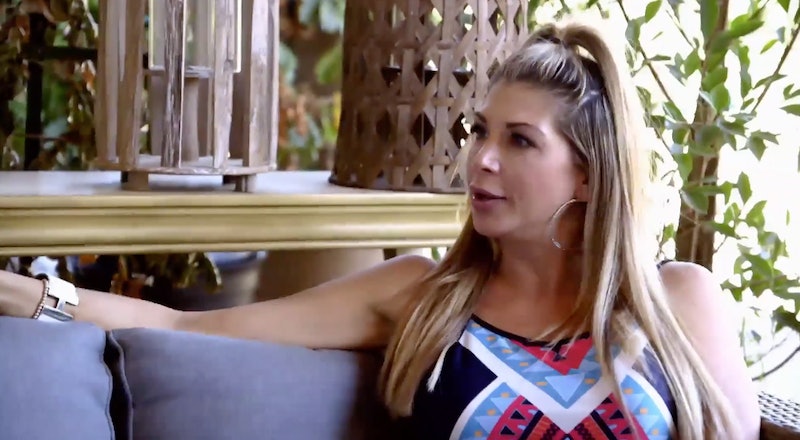 Between a brief return to RHOC and joining the case of Marriage Boot Camp: Reality Stars Family Edition, Alexis Bellino has been having a busy fall. But don't call it a comeback, because 2019 updates about Alexis Bellino prove that the reality star has stayed busy since her departure from RHOC back in Season 8.

Fans have most recently seen Bellino's names in the news because her divorce from her ex Jim Bellino was finalized August 2018, but these reality TV appearances marks the first time she's been onscreen since the split was announced. A lot has changed in her life and now she's opening up about what she's been through on both Real Housewives of Orange County and Marriage Boot Camp: Reality Stars.

During her Oct. 8 appearance on RHOC, Alexis told current Real Housewife Housewife Emily Simpson, "Divorce sucks, it’s not easy. I think it’s almost harder than death. It is a death, the death of a 14-year marriage." On Marriage Boot Camp, Alexis will discuss both her own divorce and the effects of her parents' divorce on her life and her relationship with her mother. In a scene from the upcoming season, Alexis looked at two, toy wooden homes that are split in half. As tears ran down her cheek, she commented, "It's two broken homes because I have two." So she hasn't lost her touch for delivering the drama.

In an October interview with People's Reality Check, Alexis explained why she returned to reality TV. She shared, "I think the viewers wanted to see or hear an update from me and I have been kind of healing and getting through the whole divorce. So, I felt it was time to come back out and let everybody know a little about my divorce and my new relationship." Nevertheless, there's (a little) more to Alexis than the divorces in her family and her time on reality television. The mother of three has a lot going for her these days.

She Has A New Boyfriend

Alexis went Instagram official with her new man Andy Bohn on Feb. 3. and called him "the love of [her] life." She's spent time with his children and told Emily on RHOCH that it was like a "fairytale" relationship.

She Moved Into A New Home

Toward the end of 2018, Alexis announced on Instagram that she and the kids were moving into a new home. The Blast confirmed that the family's new house is a $1.3 million dollar home in San Juan Capistrano, California.

She Is Co-Parenting With Jim

Alexis and Jim share three children together. They have a 13-year-old son named James and twin daughters Mackenna and Melania, who will be 12-years-old in November. During her RHOC appearance, Emily asked Alexis if co-parenting was going well with Jim and she confirmed that it is.

She Has A Fashion Line

Longtime RHOC viewers will never forget the hype around Alexis Couture. It appears that the brand no longer exists since the domain is now empty. However, Alexis has a new live called Glitzy Bella, full of hats, handbags, and other accessories.

So even though she's been out of the spotlight, things have been going well it seems for Alexis.