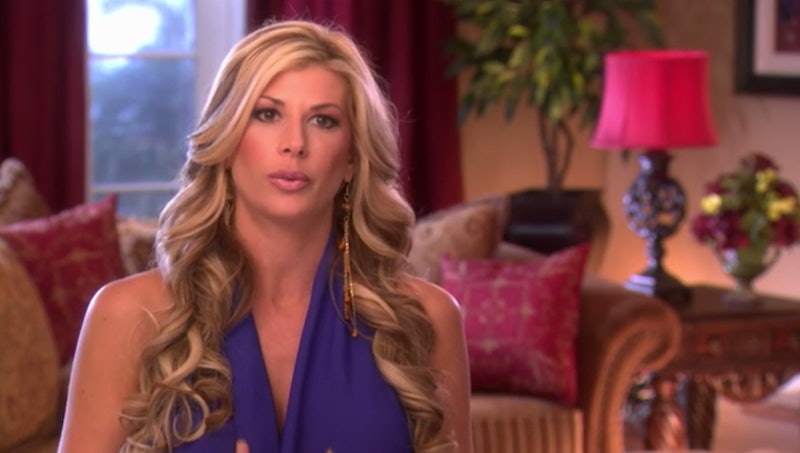 Former Housewives are never really ever that far away from the cameras, which is why it's not too shocking to see that Alexis Bellino is returning for a guest appearance on Real Housewives Of Orange County. In a preview for the Oct. 8 episode, the former cast member, who was on the show from Season 5 to Season 8, is lunching with Emily Simpson and dishing about divorce, which is very interesting given what happened to Alexis Bellino — and her marriage — on the RHOC.

Alexis made her debut in the third episode of Season 5 as a replacement for original Orange County Housewife Jeana Keough, who opted to leave the series at that time. When viewers met Alexis, she was married to her husband, Jim, an entrepreneur and businessman, and they had three children — son James and twin daughters Melania and Mackenna. Alexis’ entrance into the series was made in part because she and Jim knew Tamra, and her ex Simon, who had reportedly sold Jim one of his luxury cars.

A huge part of Alexis’ storyline was a focus on her family and their Christian values — Tamra used to call Jim "Mr. Jesus," for example. Alexis often talked about taking care of her kids and how much she enjoyed being a traditional housewife, greeting Jim in the evening with a hot meal and a drink. But things changed a little bit once she got more comfortable with the group — and the other women got more comfortable with picking on her. The other cast members questioned Jim and Alexis' marriage, gossiped about their past relationships, and questioned their financial situation, much like the women are doing with Emily and Shane this season. (And, to be fair, almost every other cast member, ever.)

But Alexis stuck around. In Season 6 Alexis started her own clothing line and began to talk more to Jim about gaining some sort of independence in her life, kind of akin to Melissa and Joe Gorga on RHONJ in recent seasons. The conversations were tough and serious, but Alexis kept on going, and by Season 7, she was serving as a morning news correspondent for Fox 5 San Diego, and she even had a small role on General Hospital.

Alexis tried to leave the show after Season 7, citing that the other woman were “bullying” her, but producers, according to Reality Tea, asked her to stay. Alexis said that she stayed on Real Housewives Of Orange County Season 8 to show her children that bullies don’t win. “I’m going to go back and fight and make my statement. If I’m going to go down, I’m going to go down fighting,” she said.

It was at this time that Alexis and Jim’s marriage seemed stronger than ever on the show, thanks to a new business venture — a trampoline park, Sky Zone, per the Orange County Register. They also seemed to be spending time with couples who weren't totally entangled in drama of the series, namely Lydia and Doug McLaughlin. (The McLaughlin's appeared briefly as "friends" on the show thanks to their relationship with Alexis in Season 8 and returned as regulars for Season 12.)

Alexis did leave Real Housewives Of Orange County after Season 8, though, and she and Jim divorced in 2018, per Bravo. “It is with heavy hearts that we inform the public of our mutual decision to end our marriage — but it’s important to us that you know we made this choice together, with love, and as the best decision for our children’s future,” they said in a statement, ensuring that, of course, they would still be friends and raise their children together as co-parents.

But just because Alexis and Jim are divorced and not on Bravo doesn't mean they don't still have RHOC connections, even if they're a little messy. Jim recently sued Alexis' RHOC co-stars Shannon Beador and Tamra Judge for defamation as a result of comments they made about him on a podcast during his divorce proceedings. Ultimately, though, his suit was unsuccessful and he had to award Shannon $138,000 in June 2019, as per People.

While the divorce is finalized and Alexis is dating boyfriend Andy Bohn, her appearance on RHOC couldn't have come at a better (or shadier) time. Given all of the discussions about Emily's marriage — and the fact that Emily is having a harder time fitting in with Shannon and Tamra — a lunch with Alexis will obviously stir the pot with the women this season.