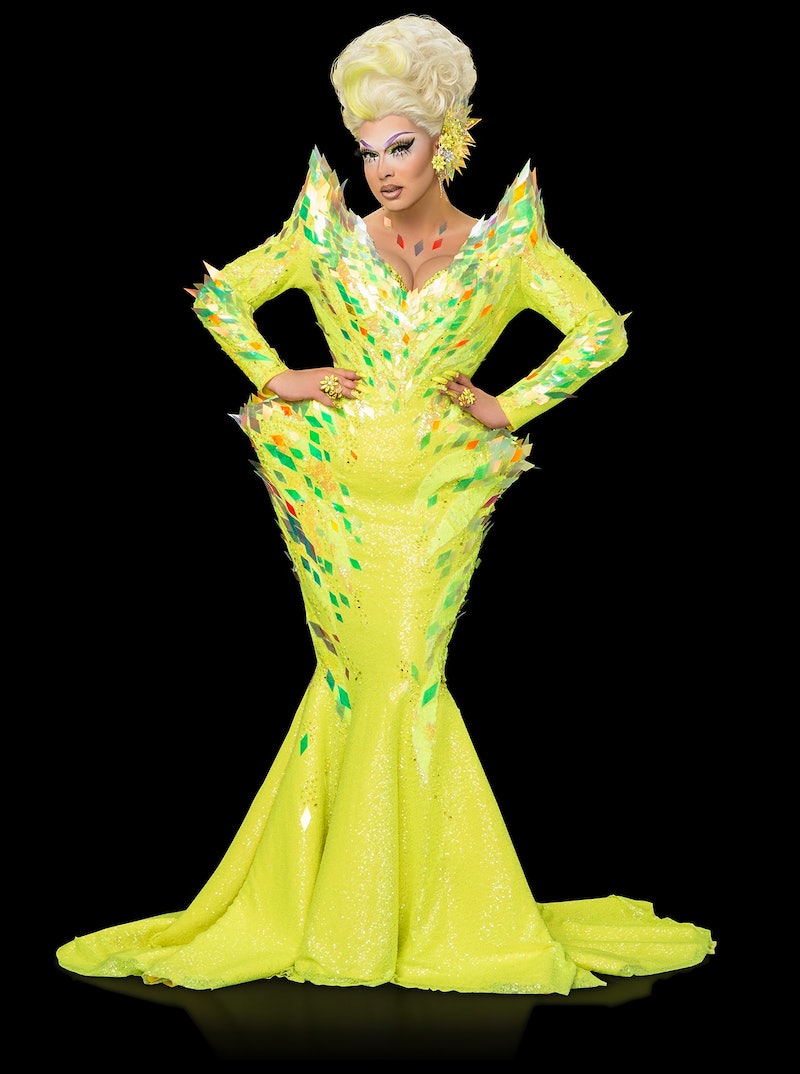 As fans already know, there's a good reason they don't call it RuPaul's Best Friend Race. And judging from the shady atmosphere on Friday night's episode, it sure seemed like there was no risk of the show turning into that any time soon. With the workroom turning tense, the claws officially came out among the final five contestants. This intensity later culminated in Sasha Velour and Shea Couleé being branded "shady wh*res" by a clearly hurt Alexis Michelle, who was eliminated from RuPaul's Drag Race later in the episode.

Judging from all of that, it'd be easy to imagine Alexis being fiercely protective of her talent and a little sour regarding her elimination. However, in an email interview with Bustle, it's clear that couldn't be further from the truth. Alexis had, and still has, a lot of love for her Drag Race sisters. Perhaps even too much.

"Part of my ultimate downfall in the competition is that I was spending too much time seeing the girls as sisters and not as competition. I had this feeling of it being like sorority and that might have softened me as a competitor," Alexis reflects, "I don’t think there was any psychological warfare going on. We all just really felt the pressure of being in that competitive environment. I actually don’t think it was THAT shady. People were just stressed and the claws came out a bit." (Emphasis Alexis'.)

All of that is completely understandable, especially when you consider how much pressure must mount when you're under the intense scrutiny of being in the top five. And that's probably especially true when you consider that Season 9 of RuPaul's Drag Race has been stacked full of diverse and innovative talent since day one. For some, that level of competition is bound to be intimidating, but for Alexis, it sounded as though it was invigorating.

"The girls this season were incredible and their drag style has definitely influenced what I do since my time on the show."

"I find inspiration from those around me. That’s really why I’ve enjoyed Season 9 so much," Alexis explains, "The girls this season were incredible and their drag style has definitely influenced what I do since my time on the show."

This is a heartening takeaway from the competition, and a sentiment we could all benefit from remembering in our everyday interactions: Take influence, not defeat. But that's not the only positive takeaway that the superstar is sharing from her time on the show. Having mentioned a continual struggle with body image issues during the season, Alexis has seemed relatable to anyone who's ever let insecurities get the best of them.

"I’ve been in many different shapes and sizes throughout my life. The weight I was at during the competition was not what I would have hoped for. It got in my head while competing," Alexis confesses. "My advice to people who struggle with these issues is to do your best to make healthy choices for yourself. Be as gentle and forgiving to yourself when you make a mistake or when you feel down on yourself for a choice that you have made. Heal and move forward."

Can I get an "Amen"? In addition to touring the world, Alexis is developing a one-woman live cabaret show and working on an album, so suffice to say fans haven't seen the last of her. And hopefully we'll get to enjoy a reunion of Alexis with her self-proclaimed sorority (can I get an invite?) sometime in the not-too-distant future. Just please, keep those claws hidden, ladies.

More like this
Twitter Is Saying The Same Thing About Jill Scott Winning 'I’m A Celeb'
By Sophie McEvoy
Yes, That Is Victoria & Another ‘BiP’ Alum In Zach’s ‘Bachelor’ Trailer
By Kadin Burnett and Grace Wehniainen
A Former 'Strictly' Star Is Set To Make A Sensational Return To The Show
By Bustle UK
BBC’s Gladiators Reboot Is Staying Close To The Original ‘90s Phenomenon
By Sophie McEvoy
Get Even More From Bustle — Sign Up For The Newsletter