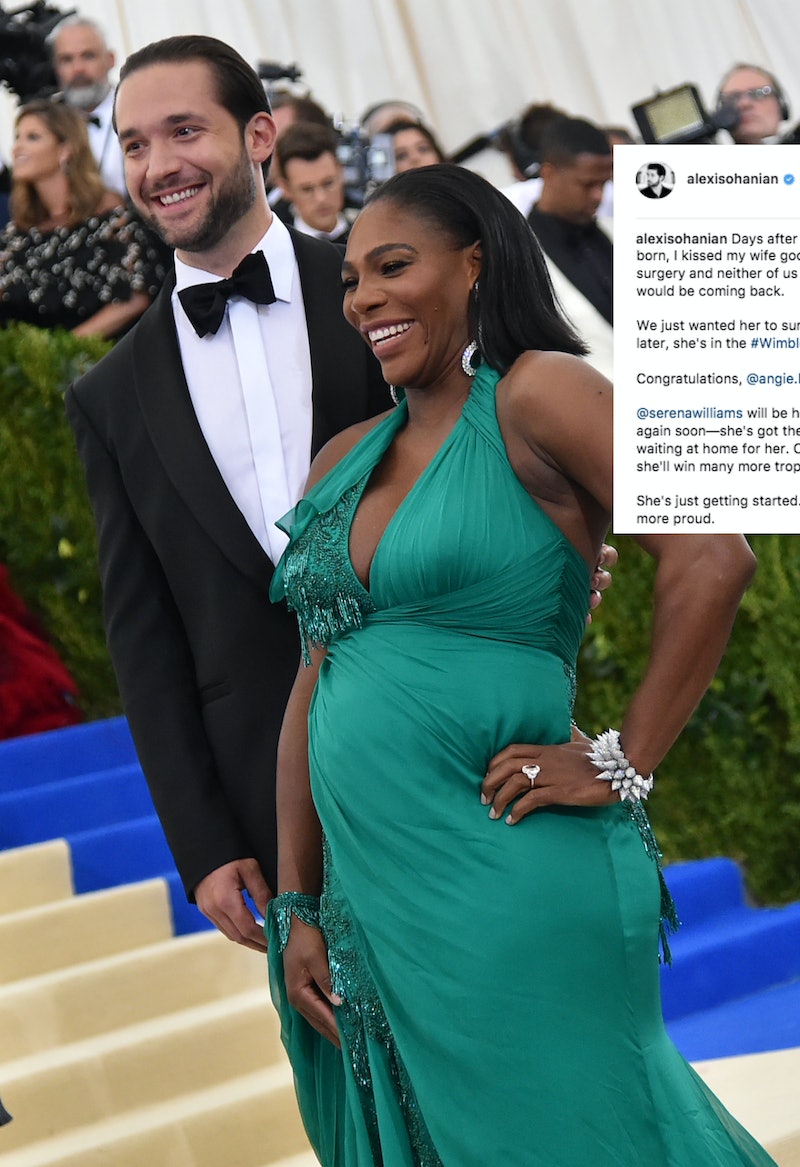 No man on earth may ever be good enough for Serena Williams, but her husband, Alexis Ohanian, Sr., comes pretty damn close. It's especially proven in Ohanian's message after Williams' Wimbledon loss over the weekend. The tennis star/greatest athlete in the world married the Reddit co-founder back in November, shortly after the birth of their adorable baby girl, Alexis Olympia Ohanian, Jr. It’s been a rough ride for Willliams since she had her baby; she revealed in February that due to complications after the pregnancy, she almost lost her life. But like the champ that she is, Williams built herself back up and made it to the Wimbledon Final just 10 months later.

On Saturday, July 14, she played a fierce match against Germany's Angelique Kerber. Williams lost the match, but as he always is, Ohanian was the most supportive partner possible, writing a message on Instagram that may make you ugly-cry.

Though she came in second, it was still a huge victory for Williams after her harrowing journey from giving birth to getting back on the tennis court. She may be the hardest on herself, but her husband is always her biggest cheerleader. Ohanian posted a photo of her focused and serving the ball, writing in the caption:

"Days after our baby girl was born, I kissed my wife goodbye before surgery and neither of us knew if she would be coming back. We just wanted her to survive—10 months later, she's in the #Wimbledon final. Congratulations, @angie.kerber. @serenawilliams will be holding a trophy again soon—she's got the greatest one waiting at home for her. Our family knows she'll win many more trophies, too. She's just getting started. And I couldn't be more proud."

Can you say, "awww"? First of all, of course, Williams will be holding a trophy again soon; she's the greatest athlete in the world. It's clear that Ohanian is her biggest and best fan, putting his love and support for on display on social media, so her fans and especially her critics can see just how strong she is on and especially off the court. Second of all, baby Olympia is far and away the greatest and absolute cutest trophy of all.

Williams got lots of love and support from not only her husband, but from her scores of fans, and this time, especially the mothers that watch her play. On July 7, Williams tweeted that she had missed a big milestone of Olympia's:

Every once in while there's an exception to the old internet rule to never read the comments, and this tweet was one of them. There was an overwhelming, beautiful outpouring of support from other mothers, both working and stay-at-home moms, empathizing with missing firsts. Chrissy Teigen, who just gave birth to her son Miles, replied: "She's practicing so you can see the real ones." Maybe the most touching response: "She missed you winning 23 grand slam titles but will still know you’re the best tennis player of all time. You’ll have thousands of magic moments with her don’t worry!" She's gonna know, since her mama is the GOAT.

Williams posted her own Instagram after her loss that echoed the message of her husband's, posting a picture from her last match with the caption:

"These past 2 weeks was amazing. It also was a sound for all moms stay home and working you can do it you really can! I’m not any better or diff than any of you all. Your support has ment so much to me. Let’s keep making noise everyday in everything we do. I’ll be back (and soon too) Road to the Us Open is next! Stay strong no matter what. Oh and this is just the beginning. Love you 💪🏿"

It's wild that she is so humble. For Williams, Wimbledon this year was dedicated to all the moms out there, as she said in her post-match interview.

Meanwhile, her husband basically uses all his social media to constantly heap love and praise on his wife and she deserves every second of it. He was recently answering some of his followers' questions on Twitter, and when someone dared to ask: "how does it feel to know that when you go to sleep at night you're sleeping beside one of the greatest athletes of all time?" he shut him down with: "One of?" Exactly.

The man knows who's the GOAT, and he knows he is lucky to be with her. And she's lucky to have him, too.