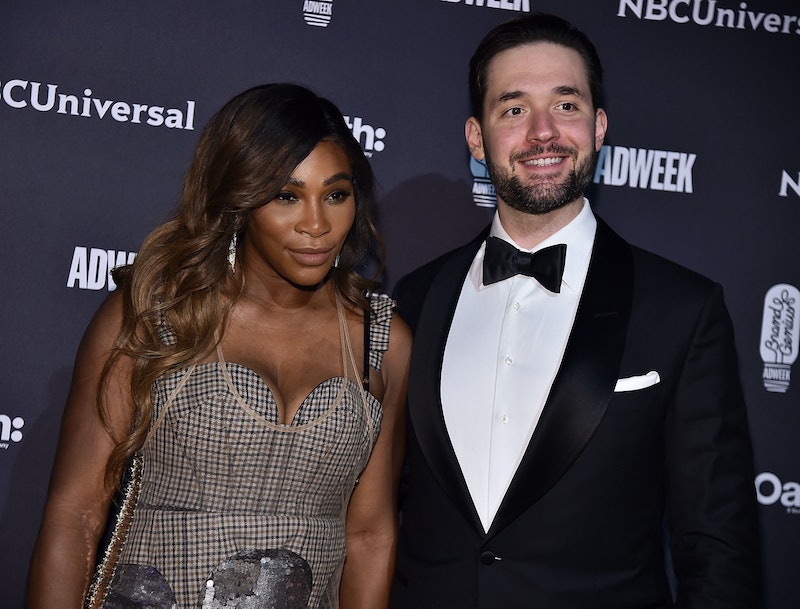 The Williams sisters have their very own, very adorable cheering section! One-year-old Alexis Olympia Ohanian stole the show at the Mubadala World Tennis Championship on Thursday, Dec. 27, when her father shared an adorable video of baby Olympia clapping for Serena and Venus Williams as they faced off on the court.

"@olympiaohanian is such a good sport she clapped for every point -- whether it was mama @serenawilliams or auntie @venuswilliams," Alexis Ohanion captioned a very sweet video on Instagram, showing his daughter sitting on his lap at the tennis championship, clapping enthusiastically at the end of a point. According to The National, Olympia's aunt, Venus, defeated her mother, Serena, in the match, but it looked as if there weren't any hard feelings, especially when the tennis champions saw their personal cheering squad on screen.

Ohanian, always the proud father, not only shared a GIF of Olympia's applause on Twitter, but also retweeted a video of Venus and Serena seeing the one-year-old's enthusiasm on the jumbotron during the match. "Here's the reaction shot of @Venuseswilliams and @serenawilliams seeing our mini-applause-machine," the Reddit and Initialized Capital co-founder wrote. Williams also acknowledged her newest number one fan on her own Twitter, account, sharing a photo of Olympia's doll, Qai Qai, sitting court side in order to cheer the tennis champion on.

In addition to facing off against her big sister in the match on Thursday, Williams also celebrated a new rule change that will protect the rankings of new mothers when they return to tennis after their maternity leave. According to BBC News, the new rule change, moms who return to the sport after giving birth will be able to "use their previous ranking to enter 12 tournaments over a three-year period."

The ruling hold greater importance for Williams, who welcomed baby Olympia in September 2017, and returned to competition the following March, playing at the Indian Wells Masters.

"I think having gone through the experience myself really opened my eyes. Would have I done it sooner had there been different rule changes? I don't know. But now there is an opportunity, people don't have to ask that question," she continued.

Williams has often been open about the difficulties of balancing her tennis career with motherhood, revealing in July that she cried after missing Olympia's first steps due to training for the 2017 Wimbledon tournament. "She took her first steps..." Williams wrote on Twitter. "I was training and missed it. I cried."

In August, Williams shared with her Instagram followers that she had been feeling like she was "in a funk," and was dealing with doubts that she was doing a good job balancing her training and spending time with her daughter. "Last week was not easy for me. Not only was I accepting some tough personal stuff, but I just was in a funk. Mostly, I felt like I was not a good mom," Williams wrote in an emotional post.

"It's totally normal to feel like I'm not doing enough for my baby. We have all been there. I work a lot, I train, and I'm trying to be the best athlete I can be. However, that means that although I have been with her every day of her life, I'm not around as much as I would like to be," she continued. "Most of you moms deal with the same thing. Whether stay-at-home or working, finding that balance with kids is a true art. You are the true heroes."

Williams concluded her post by adding, "I’m here to say: if you are having a rough day or week--it’s ok--I am, too!!! There’s always tomm!"

It may have taken Williams a while to find the balance that works best for her and her family, but we're sure that moments like seeing baby Olympia cheering for her at a tournament help make it all worth it. After all, nobody else has a personal cheerleader quite that adorable.