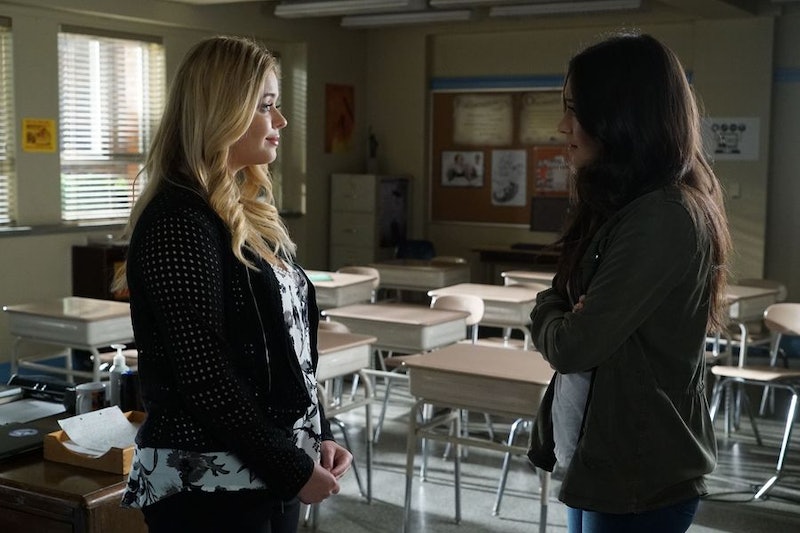 Eric McCandless/Freeform
By Lindsay Denninger
May 10, 2017

As soon as I found out that Alison was pregnant on Pretty Little Liars, I had a feeling that this would head south and fast. Well, I was right. Alison is pregnant with Emily’s baby on Pretty Little Liars, and before all of you Emison fans out there start celebrating, let me just say that this is not a great thing. This is a bad thing. A.D.’s putting Emily’s eggs in Alison’s body is the worst kind of catch-22 for Alison because she no longer has the freedom to do what she wants with her own body.

At the beginning of the May 9 episode, Alison told Emily that she was going to terminate her pregnancy because it was Archer Dunhill’s baby inside of her and it was a form of torture to have him still controlling her from beyond the grave. I’m not sure how much time has passed (it’s so hard to tell on Pretty Little Liars), but Alison’s pregnancy is early enough that she can take a pill for her abortion. But before she could start that process, A.D. revealed that Emily’s eggs were inside Alison. That means that A.D. has been planning this disgusting breech of trust for a while, and it’s so gross — especially because this new revelation takes away any sort of agency that Ali has with her planned abortion. Between planting her best friend/romantic interest's baby into her body and then making her register for gifts for it, A.D. is basically forcing Alison to keep it or at least to think very hard about her options, since she does have feelings for Emily.

Alison, like many women who do not have contraception, abortion, and other family planning methods available to them, is stuck between a rock and a hard place. She is being forced to carry a baby to term, a baby that she does not want and yet feels like she cannot not have now that it’s Emily’s. It's exploitation of the worst kind. Emison fans may think that this could finally bring Alison and Emily together, but really, it’s a gross injustice for both of them.