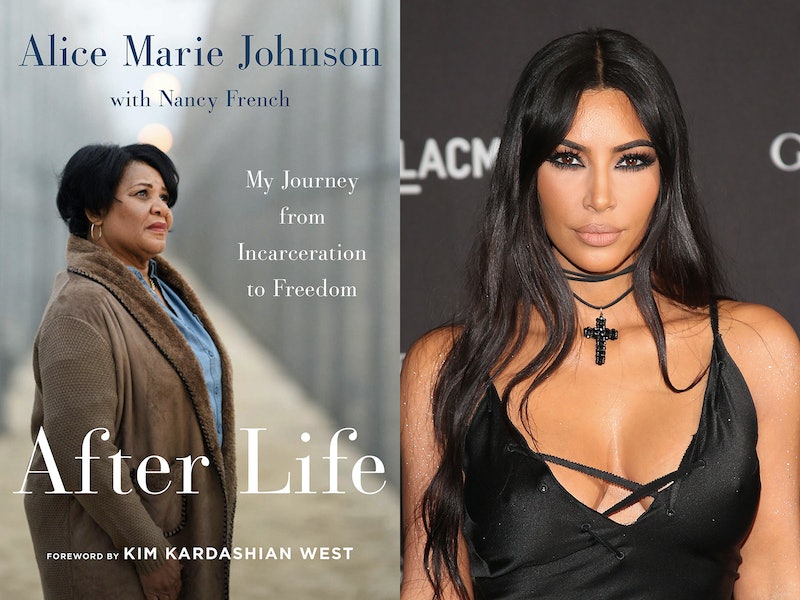 Just eight months after having her life sentence commuted, Alice Marie Johnson has landed a book deal and will pen a memoir about her life, incarceration, and fight for freedom. Kim Kardashian West, whose advocacy efforts helped free Johnson, wrote the foreword, and film and television rights to the book have already been sold.

On Wednesday, Harper, an imprint of HarperCollins Publishers, After Life: My Journey From Incarceration to Freedom, will be released this May. According to the publisher, Johnson's memoir will explore her life, her faith, and her experience behind bars, and take a "deep look at the systemic issues of mass incarceration."

Per the publisher's description:

"In this powerful book, [Johnson] recalls all of the firsts she has experienced through her activism and provides an authentic portrait of the crisis that is mass incarceration. Linking social justice to spiritual faith, she makes a persuasive and poignant argument for justice that transcends tribal politics. Her story is a beacon in the darkness of despair, reminding us of the power of redemption and the importance of making second chances count."

In a statement about the book news, Johnson, who was a special guest at the State of the Union on Tuesday night, said "I feel humbled that the telling of my story gives hope and my years of pain were not in vain."

'After Life: My Journey from Incarceration to Freedom' by Alice Marie Johnson with Nancy French
Amazon

Now a 63-year-old great-grandmother and an ordained minister, Johnson was convicted in 1996 for a first-time nonviolent drug trafficking crime. As a result of the mandatory sentencing laws of the time, she received a life sentence and was expected to live out the rest of her days behind bars.

But, after seeing a Mic video about her in 2018, Kim Kardashian West became passionate about Johnson's case and vocal about criminal justice reform. The media personality spent months having back-channel discussions with Jared Kushner before meeting with his boss and father-in-law Donald Trump in the Oval Office last June to discuss prison reform. Just a week after the meeting with Kardashian West, the president announced he was granting clemency to Johnson.

In a statement about the decision, the White House explained "Ms. Johnson has accepted responsibility for her past behavior and has been a model prisoner over the past two decades. Despite receiving a life sentence, Alice worked hard to rehabilitate herself in prison, and act as a mentor to her fellow inmates." When her sentence was commuted, Johnson had already spent more than 20 years in prison, an experience she is ready to open up about in her forthcoming memoir.

According to the publisher's description, After Life is "an inspiring memoir of faith, hope, mercy, and gratitude" written by "an icon for the prison reform movement." It will also feature 16 pages of color photographs.

In a statement about After Life, Kardashian West explained how her "life has forever changed" because of her relationship with Johnson. "Her story is a gift that will now reach so many millions more through her book and film. I hope Alice’s case is just the beginning of a movement to help those left behind," Kardashian West said. "I am invested in continuing to support Alice and this cause.”

The financial terms of Johnson's book deal have not been released, but film, television, and "life rights" have been sold to Endeavor Content and One Community. There is no word yet when viewers can expect to see Johnson's story come to life on the big or small screen, but After Life: My Journey From Incarceration to Freedom hits shelves May 21.