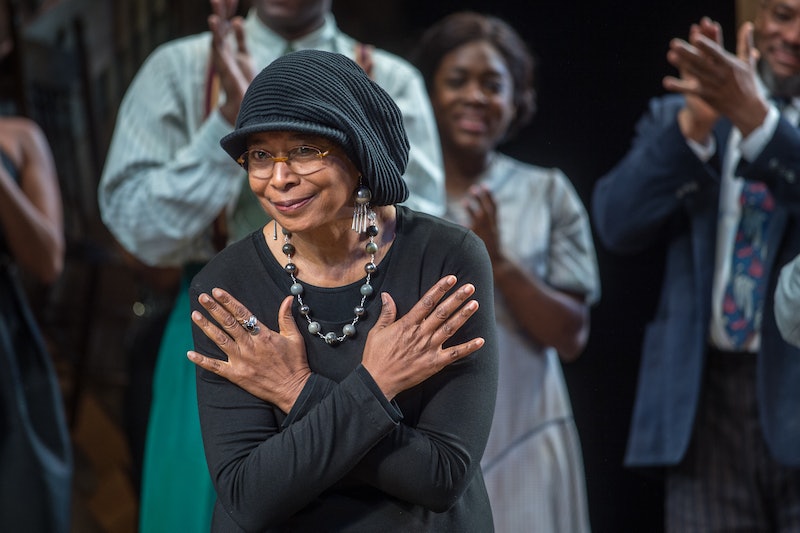 In her recent "By the Book" column in The New York Times, The Color Purple author Alice Walker suggested that her 2007 picture book, Why War Is Never a Good Idea, should be required reading for Donald Trump. Keep reading to find out why Alice Walker thinks Trump should read this children's book, and where you can find a copy of it for yourself.

A weekly feature in The New York Times, "By the Book" gives Times readers the opportunity to find out more about the reading lives of their favorite writers and other celebrities. Recent interviewees have included Michelle Obama, America Ferrera, and Michiko Kakutani. Although each respondent answers a slightly different set of questions, one of the most common is this: If you could require the president to read one book, what would it be?

Alice Walker had this to say:

"Why War Is Never a Good Idea. It is a book for children that I wrote many years ago. I believe it is immoral for adults to distort the reality of war to children. As a writer I felt I could introduce war as the disaster it is for creatures — including children — and the planet. Without scaring them, but by making them thoughtful about wearing those camouflage diapers. I will always be on the side of babies. Which is why I support a woman’s right to abortion. How dare we bring anyone so small and helpless into our dangerous situation?"

Written in verse, Why War Is Never a Good Idea shows what armed conflict can do to a variety of creatures, from frogs to children. Accompanied by bright illustrations that dampen down the fear, Walker's picture book explains war, not as a fight for glory and honor, but as an unnatural disaster.

'Why War Is Never a Good Idea' by Alice Walker
Amazon

The one book Alice Walker would require Donald Trump to read.

The question of what book the president should read has taken on new meaning in the age of the Trump administration. It is widely speculated that Donald Trump does not care for reading, and his relationship with books seems to be... complicated.

Aside from his own books, the No. 1 text Trump has been connected to, disturbingly enough, is My New Order by Adolf Hitler. A 1990 Vanity Fair interview revealed that "Ivana Trump told her lawyer Michael Kennedy that from time to time her husband reads a book of Hitler’s collected speeches, My New Order, which he keeps in a cabinet by his bed." Explaining away his possession of the book, Trump told Vanity Fair that "[M]y friend Marty Davis from Paramount who gave me a copy of Mein Kampf, and he’s a Jew." Davis disputed the account: "I did give him a book about Hitler... But it was My New Order, Hitler’s speeches, not Mein Kampf. I thought he would find it interesting. I am his friend, but I’m not Jewish."

On the campaign trail in 2015, the then-candidate stumbled over Joe Scarborough's straightforward question: "Can you read?" In his 2018 bestseller, Fire & Fury: Inside the Trump White House, Michael Wolff wrote that Trump " didn’t process information in any conventional sense... He didn’t read. He didn’t really even skim. Some believed that for all practical purposes he was no more than semi-­literate." Speaking with CBS earlier this month, former Secretary of State Rex Tillerson described Trump as "a man who... doesn't like to read, [and] doesn't read briefing reports."

So, what kind of book should you recommend to such a person? When asked by The New York Times, Ferrera recommended The Drama of the Gifted Child by Alice Miller, and Kakutani responded with Shakespeare's Richard III.

UPDATE: In her "By the Book" column, Alice Walker reported to The New York Times that she currently has And the Truth Shall Set You Free by David Icke on her nightstand. Icke has been accused of making anti-Semitic comments and espousing conspiracy theories. In a story for Tablet Magazine about Alice Walker’s recommendation, Yair Rosenberg wrote, “The book is an unhinged anti-Semitic conspiracy tract written by one of Britain’s most notorious anti-Semites.” You can read more about the controversy at Tablet.