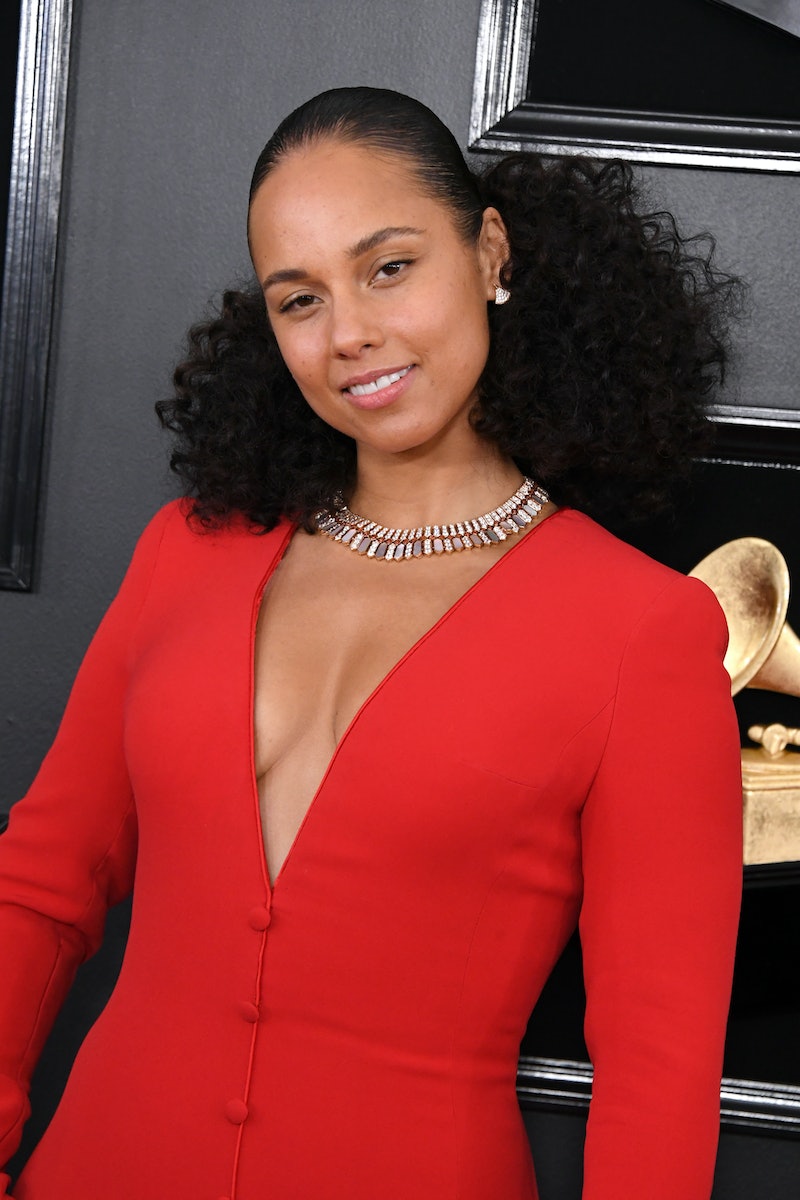 Music's biggest night is here, and your favorite musicians stepped out onto the Grammys red carpet and showed off even more looks once inside. Of course, one talented artist who showcased fashion after fashion is the host. Every outfit Alicia Keys wore at the 2019 Grammys prove that when it comes to taking risks and getting rewarded for it, she's the queen.

According to People, Keys' Grammy hosting duties mark the first time in 14 years that a woman has hosted the award show. For the singer and former The Voice coach, it's a big deal. She explained to people when asked if it was the year of woman that for her, it's "the century of the woman as far as I'm concerned. It’s all around us, politically and here in music. We’re more creative than ever before." She's certainly correct.

Thanks to the Recording Academy's efforts, the show's four most anticipated categories of album, record, and song of the year as well as Best New Artist have been expanded to eight nominees, allowing more diversity into the nominees. In fact, 5 of the 8 nominees in the Album of the Year category are women. Plus, the Academy worked to diversify their voting body, according to USA Today, by reaching out to women and people of color about joining as well as making older members re-qualify.

Now, Keys is leading the award show which has worked to become more inclusive. There could be no one better for such a year.

Of course, Keys is no stranger to the Grammy stage (or holding a few, 15 to be exact). Before her hosting duties tonight, Keys spoke to People about her first time on the stage at the show admitting that she was actually sick at the time and worried about falling down. Obviously, she didn't fall and has gone on to perform at the show again. Now, she may not be a performer, but she does have the honor of hosting, and she did not come to play.

Alicia Keys' Grammy looks (along side her talent and achievements obviously) are enough to make anyone tune into the show. Fingers crossed, because she's the host for the night, fans will get to see a multitude of looks from the artist.

For her first out of the night, Keys wore red to the red carpet and looked glam AF as she made her way into the show to kick off her big night as host.

Her first dress of the night featured a column silhouette with what seems to be a slight slit in the front. It also featured long sleeves, a plunging neckline, and buttons down the front. Keys' first look was an ultra-glam turn, and she seriously rocked it.

As usual, Keys appears to be is sans makeup on the red carpet, but she is wearing Sol De Janeiro's Copacabana Bronze Glow Oil for a bit of a highlight. As for her jewels, they were as next level as her dress.

She made her way inside with husband Swizz Beatz by her side and in a coordinating suit featuring red piping.

Keys' second outfit was the perfect choice for hosting duties. The teal green pantsuit with wide legs and a tie waist was perfection.

Plus, it even featured some seriously gorgeous fringe, and she paired it with a gorgeous Emilio Pucci scarf.

For her next look, Keys was rocking more pants, but this time she added some serious sparkle and a killer hat.

Keys then went on to introduct the legendary Diana Ross's grandson who welcome his grandmother to the stage. For the moment, Keys donned an ultra cool leather jumpsuit paired with a giant (and gorgeous) diamond necklace.

For her final look of the night, Keys rocked a final pantsuit complete with a gorgeous sheer cape.

Clearly, Keys has won the night.