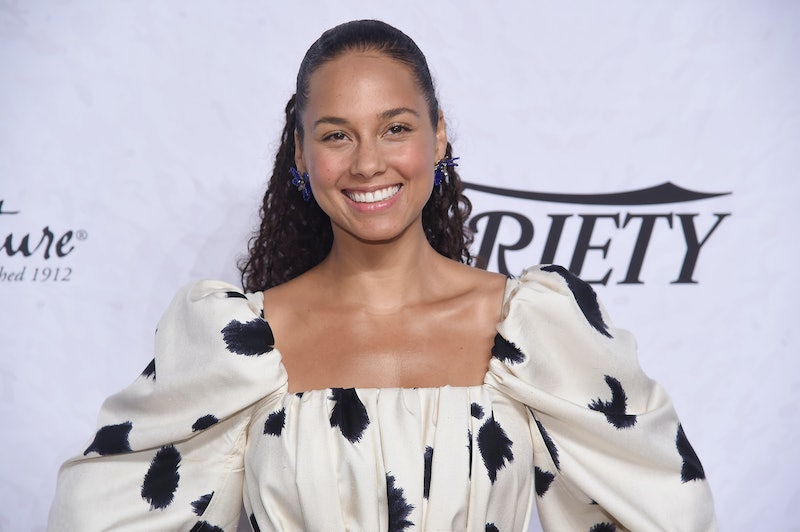 Every award show season, some of the biggest news is all about who's going to host the different shows. From the Oscars to the Emmys to Golden Globes, every show (usually) need a host, and a lot of times, the debate about who that host should be can get pretty heated. But this year, there's no need to debate the worthiness of one of the hosts because Alicia Keys is hosting the Grammys. And the very experienced Grammy alum has a great insight into the way the show is run. She's won a total of 15 Grammy awards over her time as a musician, and, based on her video announcement, she's more than ready to get on with the gig this February.

On Jan. 15, in a press release sent to Bustle and published on Keys' social media platforms, it was announced that Keys will be hosting the 2019 Grammys, which are being held at the STAPLES Center in Los Angeles on Feb. 10. Keys has been a staple of the music industries and the Grammys since earning her first nominations in 2002. That year, she won five awards, including Best New Artist and Song of The Year for "Fallin.'"

Keys announced the news with a special YouTube video titled "I'M HOSTING THE 2019 GRAMMYS." In the video, fans can watch as Keys is told she's going to host the show, goes to rehearsals and dress fittings, and tells her friends and family of her new gig. "Damn, this has got to be such an exciting show this year because of all the female artists and performers," she says in the video.

Key also took to her Instagram stories to discuss the announcement. There, she talked about how she's adjusting going from honoree to host. "I know what it feels like to be on that stage," she said on Instagram. "I know what it feels like to be proud of the work that you've put in and to be recognized for it. I just feel grateful that I'm able to bring that light and that energy. This is a first. This is amazing. I think it's perfect timing." It'll be her very first time hosting, as she said, and she'll also be the first woman in 14 years to do so for the Grammys, since Queen Latifah in 2005, BuzzFeed reports.

This year, the number women nominated is pretty high, and includes Lady Gaga, Ariana Grande, Cardi B, and Camila Cabello. And that's something Keys said is going to make this year so great. "Honestly, I feel really excited. I feel really good about it, because I feel like it's the perfect opportunity for me to give the light back and lift people up, especially all the young women who are nominated," she said. "Like, to me, it feels like sister vibes. And who's the best sister on planet Earth? ME!"

She's obviously having so much fun with this already, as seen in the YouTube video she shared on her channel. Clearly, the "Biggest Night In Music" is bound to be a good one this year, at least, if Keys has anything to say about it.