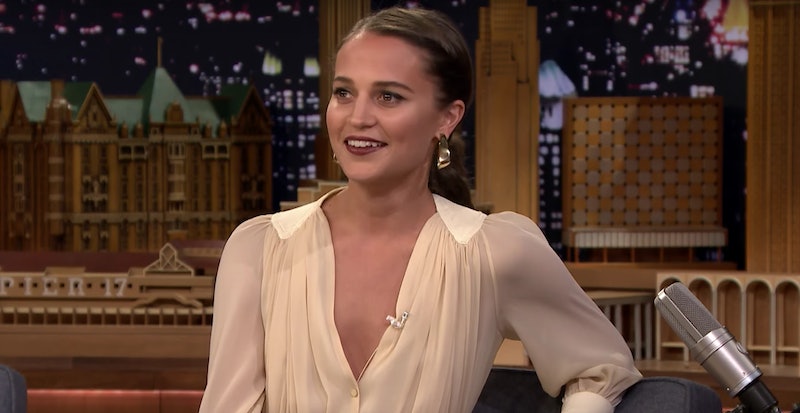 Long before she scored an Oscar, she took home another impressive title as a tiny Swedish tot. During an interview on The Tonight Show Starring Jimmy Fallon, Fallon unearthed a clip of an 8-year-old Alicia Vikander lip-syncing on a children's competition show — and the song she chose was so hilariously dramatic.

Vikander sat down with Fallon on March 14 to promote the new Tomb Raider remake, in which she stars as Lara Croft. She's also the March cover star of Vogue, but none of her recent accomplishments could even begin to compare to what she achieved at the age of eight. Kidding, of course. Kind of.

"I'd heard the story that you didn't always want to be an actress," Fallon told Vikander. "You know, I thought when I was growing up," she explained, "because I used to dance, and I liked to sing... Actually, I wanted to be a florist for a while." Vikander then went on to reveal that a few years back — perhaps around the time of the 2016 Academy Awards, when she won the Oscar for Best Supporting Actress for The Danish Girl — someone in Sweden managed to dig up a video clip that showed her singing. Well, not exactly singing. Lip-syncing. On a children's talent show. And her segment was like a Swedish Lip Sync Battle for kids.

The name of this "very famous" Swedish kids competition show, according to Vikander, translates to The Little Stars, and Fallon — whose popular segment on The Tonight Show inspired the creation of Lip Sync Battle — enthusiastically joked that he'd long-been a fan.

"What did you lip sync?" Fallon asked the actor. "All the other kids had like, Tina Turner, and cool rock stars, and Michael Jackson," she admitted. Vikander, however, did not follow suit. Not even close. She could have gone with, say, Celine Dion, or the Spice Girls, or even, perhaps, a little George Michael. But, no. Eight-year-old Alicia Vikander chose a Swedish ballad. And she won!

Vikander suggested that Fallon try to find the clip of her performing on The Little Stars, and, wouldn't you know! He'd already done his homework and had it queued up to roll.

As per the subtitles that appear on the clip, an interviewer for the talent show asked little Vikander what she wanted to do when she grows up. "I'm going to be an actress," she decidedly replied. "I thought you maybe wanted to be a singer?" the interviewer suggested. "It's hard to choose," Vikander said. "It's gonna be one or the other." Yeah, I get that. Being super good at stuff is tough.

The clip then cuts to young Vikander's performance, which I hesitate to even explain because the actual footage is too good for words. On stage, she's hyper-focused. Her costume involves a red wig and an orange peasant-type dress over a yellow, long-sleeved shirt. As the song starts, she's gazing intensely into the crowd, perfectly mouthing the syllables of each and every word.

Her facial expressions alone make it more than worth the watch, though. Little Vikander brings drama to the ballad with on occasionally quivering lower lip and some subtle — yet intense — eyebrow raises, both of which accentuate the intensely emotional lyrics. Of course, I'm just assuming that the lyrics are emotional —  there aren't any subtitles for the track, though, so I really have zero idea.

Flash-forward to the end of the show, and they're declaring Vikander the winner "for the ability to show big emotions with small means in a magical way." It's just too much, you guys. I can't handle the cuteness.

Grown-up Vikander has yet to compete on Lip Sync Battle, but after seeing her trophy-winning kid clip, she 100 percent has to. And if she ever decides to quit her Oscar-winning day job, at least she's got lip-syncing to fall back on.