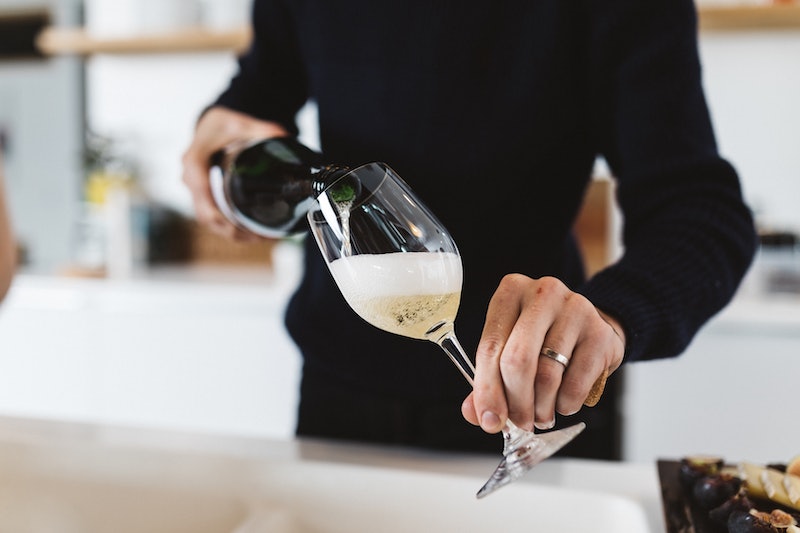 Have you ever wondered why some wine costs only $15 while others soar upwards of $100? It's question that comes to my mind every Friday night, right before I shrug and head for the bottom shelf — guided, as usual, by my wallet rather than taste. After all, like many people my age, I wouldn't know where to begin choosing the pricier stuff. But Alit Wines, a wine brand out of Oregon, wants to clear up the mystery of wine production, so buyers know exactly what goes into their wine and why it costs as much as it does — and given how mysterious the wine industry tends to be to outsiders, this is a total game-changer.

Alit is the latest venture of winemaker (and former film producer) Mark Tarlov. Simply put, the brand’s goal is transparency, from equipment and labor costs down to the fruit itself. “Our hope is that by sharing the decisions that go into each step of the process, we can talk meaningfully about what we do and why it costs what it does,” explains the company website.

That means cutting out the middleman. Alit is sold online-only, with no markup for retail, allowing the makers to price what would be a traditionally expensive wine for far less.

Here's the part that conscious consumers will love: Alit's website also breaks down exactly how much it costs to produce the wine. For a bottle of Pinot Noir, for example, farming and fruit cost $5.66 overall, and labor is $2.14. Overall, it costs about $15 per bottle. Add in a 45 percent profit of $12.35, and you get the $27.45 price listed online (not including the 3-day shipping).

That might be more than what you're normally willing to fork over for wine; according to Wine Spectator, the average retail purchase of a bottle cost $7.81 in 2015. However, Tarlov has been emphasizing the difference between Alit wines and the kinds that cost $10. Earlier this year, he pointed out to Forbes that the type of organic farming used by Alit — synthetics- and irrigation-free — tends to cost more than traditional methods, raising the price of the wine. On the other hand, that also means the wine itself is supposed to be better quality.

Transparency is increasingly important to many consumers, with nearly three in four millennials saying they view sustainability as a priority when shopping. Who wouldn't want to know how their food is grown, or where their clothes are made? The recent shift toward conscious consumerism has led to the rise of ethical, eco-friendly fashion lines like People Tree, or farm-to-table restaurants that source food locally.

The wine industry, however, has a history of being rather opaque; a wine importer once described wine pricing to the New York Times as "more art than science." In addition to the market, perception plays a huge role in wine. Research has shown that when the same wine is priced differently, people prefer the more expensive one, presumably because they assume it's a better wine. Barring extensive research before we buy, most of us are stuck using the price tag as the sole indicator of quality. It's worth noting, though, that organic wines are increasingly available, and there's evidence they really do taste better.

Ideally, Alit's transparency model can serve as a sort of educational tool. If you're going to spend any money on a bottle of wine, you'll know exactly what you're paying for, and you can learn a little about the wine-making process while you're at it. It's making the wine industry accessible to all, and that I can raise a glass to.