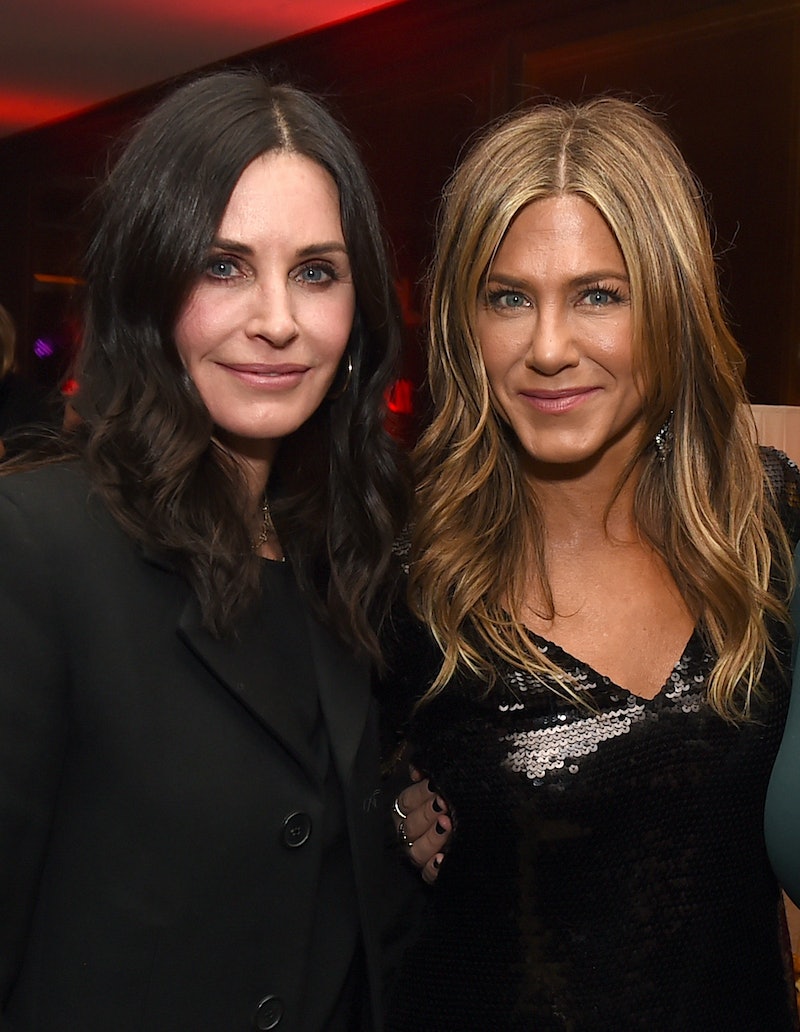 It's been 25 years since the Friends pilot first aired on NBC, but while the show itself has come to an end, the cast remains just as close as ever. In fact, during a live broadcast of The Howard Stern Show on Monday, Oct. 7, Jennifer Aniston revealed that all six cast members of Friends recently reunited for a dinner party at Courtney Cox's house (Monica would be so proud!) and had an absolute blast together just like old times. "We just had dinner on Saturday. Yeah, the whole gang, everyone was there," Aniston stated, referring to herself, Cox, Lisa Kudrow, Matthew Perry, Matt LeBlanc, and David Schwimmer.

The former Central Perk gang has had countless mini-reunions throughout the years, but being able to all get together at once isn't a common occurrence due to everyone's busy schedules. This past week, the stars aligned to allow these old friends to meet up for a good time. "Schwimmer was in town and we all happened to have a window of time so we all got together," Aniston explained. "We laughed so hard."

Though no group shots have been released yet, Cox posted a photo on Instagram of the gathering. Though the photo only included herself, Aniston, and LeBlanc, it seems that the pic was, in fact, taken at their big Friends cast dinner. "A rare night and I love it," Cox captioned the photo.

According to Aniston, all six actors have always had great chemistry together. And when Stern pressed to know if she ever found any of them annoying, her answer was simple: "Not one."

Naturally, it didn't take long in the interview for the topic of a potential Friends reboot to come up, especially since the cast clearly enjoys spending time together. But as much as Aniston loves the idea and admitted that they all “miss it every day," she worries that a reboot or revival could tamper with the show's memory and not necessarily in a good way. “I honestly think we would love it,” she confessed. “There’s an idea that if there’s a reboot of the show it won’t even be close to as good as what it was, so why do it? It would ruin it.”

Aniston isn't alone in crushing any potential reboot dreams that fans have. Back in 2017, co-creator Marta Kauffman said a Friends reboot would never happen, while Cox herself admitted to People back in October 2018 that she just doesn't think a reboot is in the cards. "I would do anything to be in a room with all of those people acting and having a great time," she told the outlet. "But I don’t see it happening."

Perry had his own interesting take on the matter, revealing to Variety in June 2017 that he's had a recurring nightmare where they brought Friends back and nobody cared, adding, "We ended on such a high. We can’t beat it. Why would we go and do it again?" Meanwhile, Kudrow and Schwimmer share the concern that a story about a group of friends in their now-40's and 50's wouldn't play as well to audiences. "If we have the same problems, then that’s just sad. That’s not fun," Kudrow explained to Conan O'Brien in 2018 with Schwimmer adding on Megyn Kelly Today that same year in 2018: "I just don’t know if I want to see all of us with, like, crutches and walkers. I doubt it, I really doubt it.”

Maybe they're right and a reboot will never come into play, but one thing's for sure: this group is still there for each other long after the cameras stopped rolling.

More like this
The First Trailer For 'That '90s Show' Includes So Many Nods To The Original Series
By Jack Irvin, Alyssa Lapid and Grace Wehniainen
Kate Winslet To Star In Russell T Davies' 'Dark Season' Revival
By Sam Ramsden
'The Princess Diaries 3' May Go Ahead Without Anne Hathaway
By Darshita Goyal
'Bridgerton' S3 Teases Exciting Social Season For Penelope Featherington
By Bustle
Get Even More From Bustle — Sign Up For The Newsletter