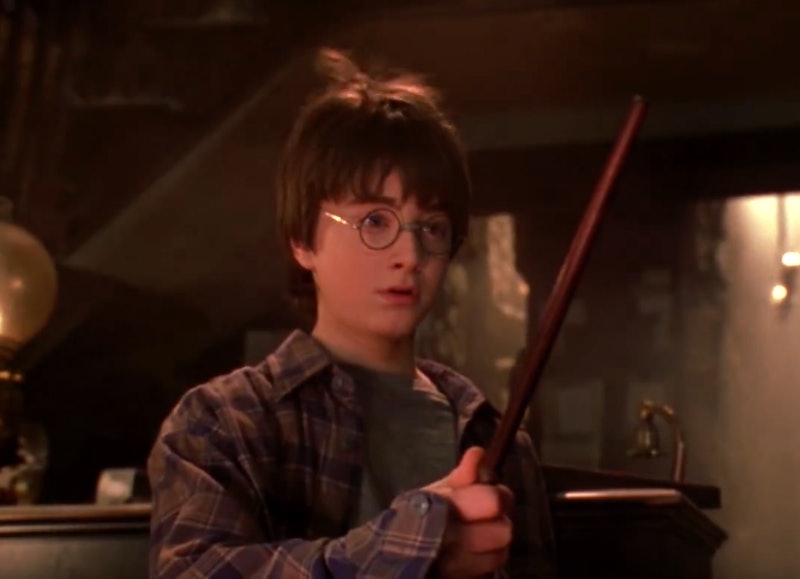 HBO just revealed something that will make you more excited than you were when Harry and Ginny finally got together or when Neville got his time to shine. In a post on Facebook, the streaming service revealed that it will feature all eight Harry Potter movies on HBO Go, starting on Jan. 1, 2018. Now, instead of constantly waiting for a marathon to appear on other networks or dusting off your DVDs again and again, you can simply watch all of the magic unfold on-screen in a way that will be easier than ever before.

As we all know, tons of amazing films can be accessed on various streaming platforms, whether it be Fargo on Amazon Prime, The Sweetest Thing on Hulu, or Trolls on Netflix (hey, whatever your taste), the options are practically endless. However, for Harry Potter fans, there's always been something missing. The movies haven't ever been able to be streamed on a major platform, so this HBO Go news is a really big deal. The site might already have plenty of big movies, but simply nothing can compare to the gratification of hearing the voices of Harry, Ron, and Hermione coming from one's laptop speakers.

Seriously, it's as if the people at HBO Go took their wands and whispered "lumos" to light up everyone's lives with unmitigated access to each of the magical movies about The Boy Who Lived.

This news will likely make fans of Potter feel even more excited for 2018 and all it has to offer. Now, with the movies available on HBO Go, we'll all be able to reminisce about our childhoods and enjoy the magical entertainment whenever we want, from the comfort of our own homes. The eight Harry Potter films will join Fantastic Beasts and Where to Find Them on HBO Go, which means that all nine of the movies taking place in J.K. Rowling's fantasy world will all be together on the streaming platform, at your disposal.

While die-hard fans of the series likely remembers watching the Harry Potter films on Freeform (formerly ABC Family) during the network's "Wizarding Weekends," as said, the HBO additions will be the first time people can view the movies on a streaming service. You know what that means, right? No commercial interruptions. Boom. You'll feel like you're flying through the movies on a Hippogriff in no time.

Recently, another source of exciting sorcerer news broke, as Warner Bros. announced that in 2018, the Harry Potter augmented reality game will finally become available. The game will resemble "Pokemon Go," and even though nobody knows exactly what that will look like just yet, it most likely will be a dream come true for every Harry Potter fan who waited impatiently for their Hogwarts letter to arrive.

With the combination of the game, the new additions of the Harry Potter movies to HBO Go's selections, and the Fantastic Beasts sequel's scheduled Nov. 16, 2018 premiere date, the upcoming year is shaping up to be the most magical ever for fans of the beloved franchise.

At this rate, in 2019, everyone will be able to get from place-to-place on broomsticks and colleges will start offering scholarships for the top Quidditch players in the country. Well, even if that doesn't happen in the next two years, it's certain that 2018 will be more Harry Potter-filled than any year before. If you don't celebrate by watching all the HP movies, from 2001's Harry Potter and the Sorcerer's Stone to 2011's Harry Potter and the Deathly Hallows: Part 2, you might want to reconsider calling yourself a Potter-head, because this kind of news demands a movie marathon.