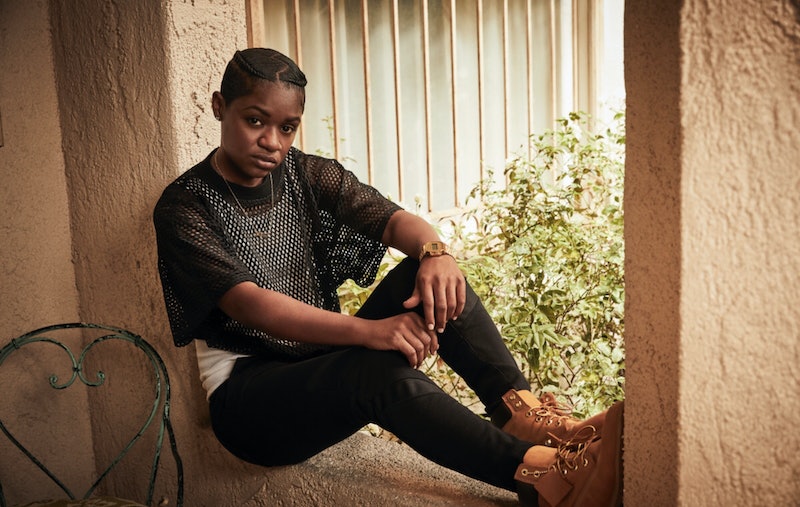 Spoilers ahead for Episode 3 of All American. All American might focus most of its screentime on the journey of Spencer, a high schooler from a rough L.A. neighborhood who transfers to play football at a wealthy Beverly Hills school. But in exploring Spencer's support system, the CW drama also brings in another complex character, Coop, with a story of her own to tell. In an interview with Bustle, actor and rapper Bre-Z says she wants her character in All American to be a realistic portrayal of a young lesbian woman — not a product of stereotypes.

"I think whenever I'm asked to play a lesbian role, for me, the initiative is always just to kill the stereotype," Bre-Z says over the phone in late October. "Let's kill the 'dyke' or [the idea she] wants to be a boy, or wants to be a man, or thinks she's a guy. I'd just like to kill that, and I'd like to not leave a character one-dimensional."

Anyone who's watched the show, which is in its freshman season, will know that Coop is anything but one-note. Her performance has been called out by critics as a highlight of the series, and part of that success is likely due to the affection the actor has for her character. "I think with Coop, we were able to bring so much love, and charisma, and personality, and compassion to a human being. I don't care if it's a black lesbian or a white gay male — it doesn't matter."

In Episode 3, Coop has a game-changing conversation with her mother. Though she's always seemed secure with who she is in the time since viewers have met Coop, she'd never had a frank conversation with her mother about the fact that she's gay. And when she finally does, it doesn't go well. Her mother quietly and devastatingly tells her that she won't "condone" Coop's identity, and that if she won't abide by her rules, she'll have to leave.

Bre-Z says it was an important and authentic dynamic for the show to dive into. "I think that was a very, very real thing. I believe that with kids these days and ... coming out to their parents, it's a very sensitive ground to walk on. As a child, you want to respect your parents and their wishes, but at the same time, you obviously want to be able to be yourself," she says. "In my opinion, as Bre-Z, I feel as though adults should really see what the denial or the shutout can actually do to a child. I think that when you have a child, you should love them regardless."

The actor isn't sure where the mother-daughter pair will go from here, but whatever happens, it'll be an uphill battle. "I think moving forward, I can't even say there's a 50/50 [chance of reconciliation] because we've seen that her mother completely shut it out, and doesn't want to hear anything about it," Bre-Z continues. "And that resulted in a severe disconnect between the two of them. I honestly don't know how they will move forward. I don't. Because where do you pick up from just essentially dropping your child off?"

Bre-Z says though there's no replacement for the foundation that family offers, she thinks Coop will glean strength from people like Spencer and his family, whom she is seen crashing with after leaving her own home. "I do believe with the support of Spencer and his family being like family to her, it'll definitely give her some peace of mind and some hope moving forward with life."

Whatever is coming down the pike for Coop, Bre-Z says she's just enamored with her character's "level of compassion." "Coop is a mirror of me when it comes to that. Just her ability to handle herself and still make everyone else a priority. She wants the best for everyone even when she doesn't know what's best for herself," she says. "It takes a different kind of person to be that way."

In a show featuring plenty of conflict and rivalries, both on the football field and off, that compassion is a welcome addition. Judging by the affection she has for her and the way she cares about her portrayal, it seems that no matter what hurdles Coop might encounter as the show progresses, she's in good hands with Bre-Z.