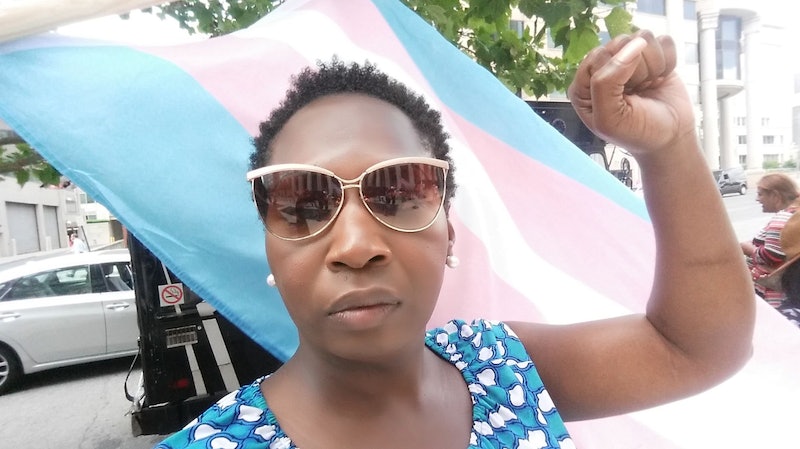 In this op-ed, Lourdes Ashley Hunter, the executive director of Trans Women of Color Collective, explains why the Trump's administration's draft memo defining gender shouldn't come as a shock.

Every day, trans people wake up in a world designed to erase them off the face of the earth. And as soon as we step foot outside of our doorsteps, we are fighting for our lives. It is not a guarantee that we will make it back home. There's nothing that the Trump administration — or any administration — can do that we aren't already facing today.

As a Black trans woman, I've survived homelessness, street-based sex work, and unemployment. I've been discriminated against in employment and housing opportunities. My entire life I've had to fight just to breathe.

Trans people of color have survived everything that has been thrown at them: not being able to find support and love and affirmation in their homes and in their community for who they are; not finding support from the government in terms of accessing educational opportunities that are free from discrimination, harassment, and bias; not being able to find employment and raise a family. We have survived all of these obstacles and continue to survive them, with or without the government.

So when we're talking about Trump trying to erase transgender people from existence, Black trans people have already been fighting for their lives— there's not much more that he can take from us that people haven't already tried to take.

Trump can’t erase shit. He cannot erase the multitude of contributions from trans people and gender non-conforming people of color. The blood, sweat, bodies, bones, and tears of our ancestors like Sylvia Rivera and Marsha P. Johnson have paved the way for us to stand in our identities, firmly, boldly, and unabashedly.

Trump cannot erase any of those contributions, nor can he erase the history, religion, and science that has already affirmed that trans people exist (and we have also contributed greatly in these fields.)

When Trump is long gone, there will still be policies in place that impede the lives of trans people.

What we need right now is for cis people and people with access to resources and access to privilege to go beyond listening and start doing. We need folks to ask trans people of color what is it that they can use specifically right now to shift the narrative of violence, discrimination, and death in our lives. And one of those key things is leveraging their access to resources to create opportunities for others.

That means directly giving funds, resources, and skills to organizations that are led by Black trans people working toward collective liberation. Give resources and money to those organizations doing that work.

For 42 years I've been fighting for my life as a Black transgender person, and every day there has been something that has tried to kill me and has failed. We are a resilient community, and our ancestors have given their lives for us to stand tall today. And that’s what we plan to do, throughout all adversity.

When Trump is long gone, there will still be policies in place that impede the lives of trans people, of disabled people, of undocumented people. We will still live in a world that considers our lives disposable. And we will continue to rise above all of that bullshit to live our fullest lives.

You can donate to Trans Women of Color Collective here.