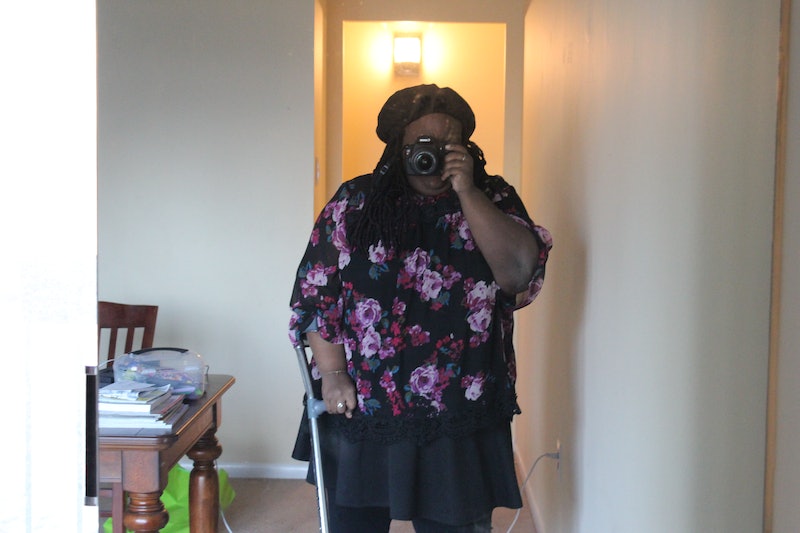 As a kid, I was obsessed with being a ballerina — but when I looked at the world of ballet, it was tough to dream of a future as a dancer. Black ballerinas were something we rarely got to see, period, but ones on crutches? Ones who walked on their toes not due to years of pointe practice, but because of how tight their tendons were? I would never get to see that.

But I wanted to feel the gracefulness that oozed from the dancers I saw, to move with an ease I never would otherwise get to experience. So when I was seven, I asked my mom to enroll me in a class at the local dance school.

The school refused, every day for a year. That’s because my mom went back every day for a year and asked them to build a class for me and other disabled kids. Eventually, they relented — I don’t know whether it was because they genuinely saw the need for a space like that, or just because they just wanted my mom to stop. But they created a class for me.

However, I soon saw that the class wasn’t what I had expected. I kept asking if we could do anything harder than spin and wave our hands. The teachers told me no, that that was “good enough.” I wanted to develop art, but the teachers there just wanted me to be seen. I wanted to be challenged, but no one challenges those born with “challenges.” I could feel how frivolous the class was. After a year in that class, I realized that the teachers had no greater goals than placating our parents and parading us in front of an audience inspired by the disabled kids.

Most people were interested in what my struggle could do for their own lives, rather than in what it meant to me to struggle.

I wanted my dancing to mean more than the good feeling people got when they saw me on stage. I wanted to be taken seriously. But it seemed like most people were interested in what my struggle could do for their own lives, rather than in what it meant to me to struggle. To them, I was an “inspiration.”

This wouldn’t be the only time I came to this realization; when I attended special events held for disabled children, I’d often observe the organizers off to the side talking amongst themselves, only interacting with us when press arrived.

And it didn’t end when I got older. A number of times, I have been on the street, walking along, when people have stopped me to tell me they were inspired by me — but not because of anything I had done. Before I could even speak, people would believe my body told the story of who I was. In stores, at schools, or when visiting churches that were not my own, people would do similar things, reinforcing what my "inspiration" meant for them.

What was even worse was that many of these people made no effort to get to know me. There was no curiosity as to who the person who inspired them was. Why had no one asked me what my dreams were? Did they want to know my favorite color? Did they even know my name? Did they not want more?

From outside the disabled community, my accomplishments are rarely seen on the basis of their own merit. Instead, they’re often viewed as the cute hobbies and inconsequential actions of a disabled girl, seen as merely “inspiring.” No matter what I do, I’m viewed by many as just "inspiring" — rather than intelligent, driven, or passionate.

Because of this, I’ve spent the majority of my life convinced I didn’t know who I was. Every time I became surer of myself, the world would cast doubts. I began to feel like being inspiration was all I had to offer to the world, and I started playing into what people wanted of me.

I couldn’t trust anyone who merely saw me as an idea.

In high school, I felt like I was living a complete lie: I was the only black disabled girl in the school, frequently paraded around by the administration as an example of the school’s diversity. In reality, only four out of the school’s 1,400 students were black, and the teachers and administration often took the side of students who committed racist acts. Teachers there would make me justify affirmative action to an all-white class, or try and get me and the only other disabled kid, a wheelchair user, to race each other down the hall.

It was four years of gaslighting and feeling like I didn’t belong. And yet, it ended with the school presenting me with an award for “Perseverance Through Excellence” — an award that never existed before or after I accepted mine.

The entire time, I smiled like I wasn’t also hoarding razor blades, and cutting myself in bathroom stalls and empty rooms.

I couldn’t trust anyone who merely saw me as an idea.

I had been crumbling for a while, but I didn’t get help. I couldn’t bring myself to get it at the time — because while I am disabled, I am also a black woman, and our reputations don’t get second chances. That’s what I told myself then, and that perception still eats at me.

No one could make assumptions about what was on a page after only taking a cursory glance, the way they so often did to me.

When I began college in 2008, I was excited; I had been going on college tours since I was 11 years old, in anticipation of finally coming into my own at university. We students had all earned our admission to the school by our own merits (as far as I knew), so we could all start at the same level. I thought the pain of being an “inspiration” would go away, because I had worked hard for my place there and no one could dispute that. College felt like it could be a collaborative space, one where we all took the opportunity to really get to know each other deeply and exchange ideas. I thought that all of the anger and self-hatred I felt in high school would magically disappear — like living in a cinderblock room with a complete stranger would be the difference.

I had fun like any college freshman. But soon, after I earned a few bad grades, I fell into a deep depression. I began to believe that I didn’t deserve to be at college, that teachers had passed me along because I inspired them. I had worked hard in school, but in less than a semester, I began to feel as though none of my accomplishments were really mine.

After my parents hadn’t heard from me for a month, they came to get me, and I dropped out. Eventually I went back to school, under the agreement my parents would help me pay if I sought counseling.

After graduating and working for a religious nonprofit for two years, I decided, on Election Night 2016, to move to Paris to attend grad school for writing. I had been writing since childhood — at first, just because my mother forced my brother and I to write anything for an hour, every day, after coming home from school. But after a while, it began to grow on me. I could see the power of writing. No one could make assumptions about what was on a page after only taking a cursory glance, the way they so often did to me. They had to go deeper, read a little more. Only once they had finished reading could they critique, throw away, or dismiss. I had been writing a blog off and on for years, but experiencing the hell that was the election made me begin to write in earnest, and actually try to be honest in my writing.

With words, I can create entire worlds in which disabled people are considered normal and treated as such. That was the fantasy — that disabled people could have lives as dramatic as any episode of a Shonda Rhimes show, that their disabilities wouldn’t be seen as the very center of their lives, that they’d been understood as complex people with hopes and dreams, not one-dimensional inspiration fodder. I wanted to see disability in color, in all colors. My color, in particular.

My greatest dream is to build these worlds. I write and imagine screenplays; I continue to write my blog, Crutches And Spice, to dismantle stereotypes about disabled people; and I hope to one day write my memoirs. I do all this to release disabled people of the burden that our lives aren’t things to be acted upon, to make clear that we are whole and complex people with hopes and dreams. I want to build a community of hope and understanding around this knowledge, and around the ways in which we become family to one another — in the face of a society that doesn’t want to see us. I don’t want anyone with a disability to feel like they’re being stared at with no one actually seeing them. I want us to be free of being an inspiration.

Editor's Note: If you or someone you know is considering self-harm or experiencing suicidal thoughts, call the National Suicide Prevention Hotline at 1-800-273-8255 or text HOME to the Crisis Text Line at 741741.