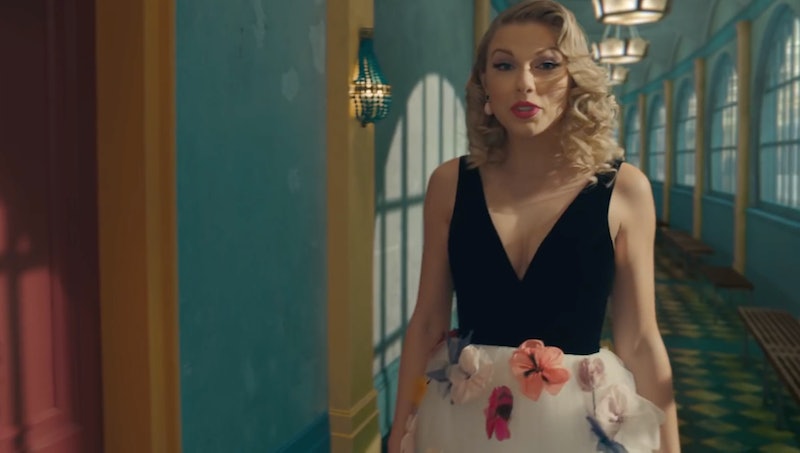 The pastel hues and images that have been cryptically dominating Taylor Swift's Instagram for the past few weeks have come beautifully and epically to life in the video for her new single "ME!," featuring Panic! At The Disco singer Brendon Urie. All of Taylor Swift's outfits in the "ME" video are pretty, sweet, and pastel, which is apparently her thing now. The fashions that the singer wears in the clip officially introduce the aesthetic of TS7 aka Swift's seventh album.

From the vintage-inspired, tea-length Monique Lhuillier dress in the opening sequence, in which Swift and Urie portray a couple arguing in French and in front of their "daughters" (Swift's beloved cats) to the sunny yellow power suit she dons during a dance number, Swift is all about spring-like colors that usually define Easter baskets. The overall color palette is soft, while the apparel's cuts and shapes are strong. As for the song? Yeah, well, that's catchier than a cold in January.

Swift cycles through seven outfits, all the while reminding viewers that she is one of a kind through the lyrics. Here's a complete rundown of all the bright and beautiful looks in the "ME"!" video. Forget about the hidden meanings, thematic hints, and digitals easter eggs that Swift's videos are known for. It's all about the Easter egg-colored ensembles.

As for Urie, the singer looks incredibly dapper in his suits. He wears various colors, cuts, and prints throughout the "ME!" video as well.

The TS7 era is here and it's pastel AF.