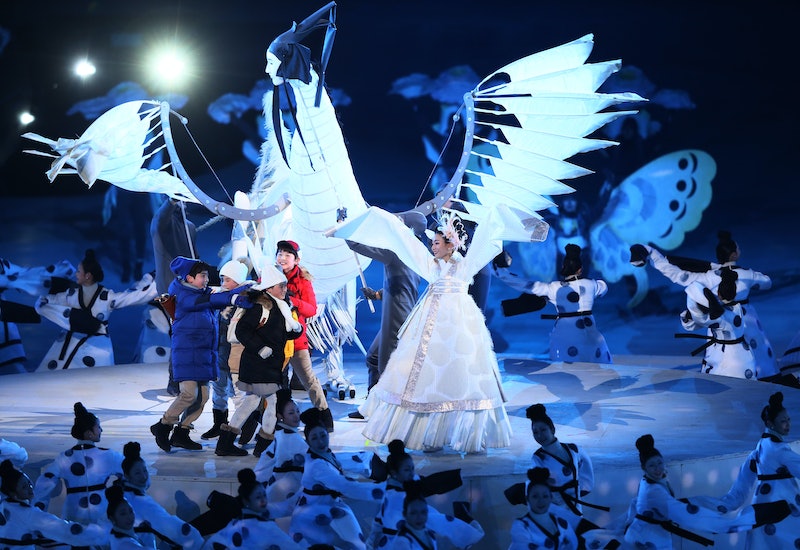 The 2018 Olympic opening ceremony was nothing short of grand, and that's partly in thanks to a collection of breathtaking costumes. The 2018 Olympic opening ceremony costumes helped to capture a spirit of wonder, hope, and peace associated with the Winter Games, making for an especially meaningful start to the Olympic games in PyeongChang, South Korea.

The winter-themed opening told the story of five children who follow Soohorang the White Tiger, a traditional South Korean guardian god and this year's Olympic mascot, into a snowy fantasy world while seeking peace. The delightful display of time travel and mysticism was told without words, relying on music and costumes to tell a fantastic fantasy story. And viewers were truly transported to another world, especially give the sartorial success of the performance.

In case you missed the stunning performance, check out the meaningful outfits that helped tell the inspiring story visually. From snow-inspired costumes to tributes to the South Korean flag, viewers were treated to many looks that helped welcome nations together.

Coming along with the mythical parade of snowy animals was a woman dressed in a gorgeous white hanbok, a traditional form of South Korean formal dress reserved for special occasions. The woman served as a guide for the time-traveling children, and a welcoming face into a new fantasy world.

The lead queen-like figure was lead in by a court of women wearing black-and-white spotted hanboks. The traditional dress, which is usually incredibly colorful, was understated to match a white snowy theme.

A collection of women wearing outfits in the colors of the South Korean flag formed intricate shapes while drumming during the opening ceremony. Their shirts where white, while their skirts were red with blue lining that peeked out as they ran to the rhythm.

A sea of drummers dressed in white sat played with fury during the first half of the show. As the women in the red skirts, who were also drumming, formed shapes around them, these musicians stayed stationary.

It was only at the end of the performance when lights fell upon them, turning the circle of people into the center of the South Korean flag — a red and blue taeguk which symbolizing balance.

The former South Korean athletes serving as flag bearers for South Korea wore white robes and eye-catching hats. The hats echoed the colors of the Olympic rings, though it's unclear if this was purposeful.

To help usher in each nation, women dressed in gorgeous icicle-inspired looks lead each each group of athletes. The women wore skirts make entirely of ice-like material, and carried each nation name on a frosted branch. The ear muff and crown combo is also darling.

Dancers in snowsuits swayed to music during the opening ceremony. The dancers were dressed in the colors of the Olympic rings.

Flag bearers of the Olympic flag wore muted colors mimicking the hats of the South Korean flag bearers who came before them. The colors were pastels that mimicked the rings on the flag they carried.

Wearing a style of South Korean traditional dress, men rose the South Korean and Olympic flags to symbolize the start of the 2018 Winter Games.

Performers dressed on outfit reminiscent of Korean martial arts uniforms performed during the closing part of the opening ceremony. The sport is one of South Korea's most notable athletic exports.

Dancers in futuristic outfits that mimicked the hue of ice and snow also performed during the ceremony.

With all of the sartorial success during the opening ceremony, the 2018 Olympics are off to a strong — and fashionable — start.