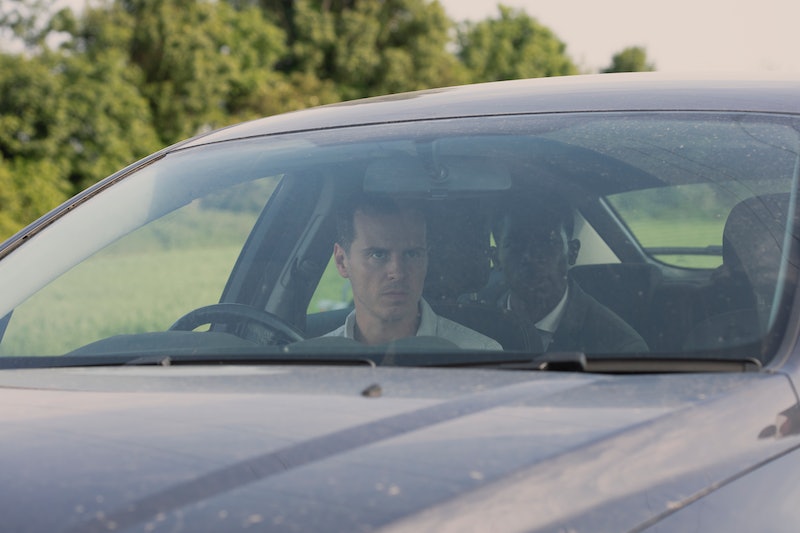 Spoilers ahead for Black Mirror Season 5. Part of Black Mirror's appeal is that it's an anthology; you can watch and skip episodes as you choose without missing any of the story. However, those who do watch the series in its entirety have been rewarded with numerous callbacks and Easter eggs over the years, as it's been confirmed that though the stories are separate, they exist in a shared universe. There aren't as many Easter Eggs in Black Mirror Season 5 as there have been in past seasons, but there are still some crucial connections that anchor it in the Black Mirror universe — you just have to make sure you're really paying attention to catch them.

Of course, Black Mirror is primarily connected by theme and tone, and Season 5 similarly probes issues of consciousness, power, identity, and the myriad ways technology impacts our lives — for better or for worse. This season, though, is more about how people use technology than how technology uses them, from a taxi driver distraught by how his addiction to a Twitter-like app cost him his fiancé in a car crash to a callous, controlling aunt looking to commodify her niece's musical talent — even if that means putting her into a coma, mining her brain for song ideas, and killing her off. But amid all that bleak commentary, finding Easter eggs breathes back in a little fun. Here's what we were able to spot in Season 5.

"Striking Vipers" follows two estranged college friends who reconnect by playing a Mortal Kombat-esque virtual reality game. It's made by TCKR — the same company introduced in Season 3 episode "Playtest" for a similar (though far more terrifying) VR experience. TCKR was also the company behind the simulated afterlife in "San Junipero," from the same season.

There was actually a preemptive reference to Season 5's "Smithereens" in Bandersnatch. In one of the interactive film's many endings, viewers were shown a UKN news segment talking about Stefan's game. A news crawl at the bottom read "senate committee grills Smithereen CEO Billy Bauer over Russian bot" — teasing Topher Grace's Season 5 character. Bauer is also clearly a Radiohead fan, as their song "Daydreaming" is the company's hold music, marking the second appearance of the band's music in the series.

"Rachel, Jack, And Ashley Too"

"Rachel, Jack, And Ashley Too" is chock-full of references to other Black Mirror episodes. As in Bandersnatch, the hospital shown is called Saint Juniper's Medical Center — an obvious callback to "San Junipero." The "grain" memory device from Season 1 episode "The Entire History Of You" also has its own commercial. But perhaps most notably, we finally get a look at the The Sea of Tranquility TV show mentioned in "The National Anthem" and "Nosedive": during a newscast, an image of the series pops up behind the reporter, revealing that it's an anime show.

Perhaps Season 6 will finally give fans a full look at the long-teased show-within-a-show — and don't be surprised to see TCKR, Ashley O.'s music, or the Smithereens app pop up too, should Black Mirror return, that is.