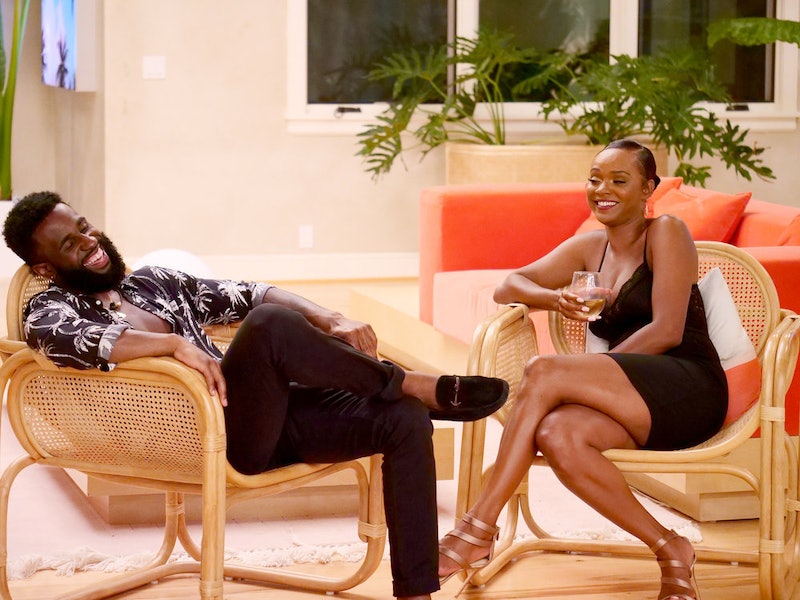 When she said he gave her "not butterflies, but maybe just one flutter," it was just the first of many clues that Esonica and Kareem are dating after Temptation Island. The rest are not-so-inconspicuously sprinkled throughout their social media pages. It's like they're not even trying to hide their current chemistry.

Scroll through Esonica and Kareem's Twitter feeds, and you'll notice that they both retweeted the same two posts about their date from the Nov. 14 episode. The first is a video in which Esonica admits to seeing Kareem as more than a friend, and the second is a behind-the-scenes photo from the show's executive producer Scott Jeffress. "Behind-the-Scenes of a beautiful date from last week's episode," he wrote. "Excited for the dates to come!" Given that they both shared the tweet, Esonica and Kareem must be pretty excited, too.

Elsewhere on Twitter, Kareem tweeted, "Find someone that lets you be you," and Esonica liked it. And on Oct. 18, she shaded Gavin for criticizing the way she looked on the show. "Gavin is tripping!" she wrote. "I looked good picking my first date." Kareem quoted the tweet and replied, "That's right," with a heart emoji.

Esonica then replied to that tweet with two perky smiley faces, which Kareem subsequently liked. It's a subtle interaction, but nonetheless telling. After all, Gavin probably wouldn't exactly love his girlfriend calling him out and flirting with Kareem publicly if they were still together.

Kareem has also been complimentary of Esonica in interviews, telling PeopleTV's Daryn Carp and Dave Quinn he was attracted to her because, "Her personality was very unique... She was respectful, she had a lot of confidence in who she was. She wasn't scared to show it."

But more importantly, when they asked what his biggest takeaway from the experience was, he responded "patience." Could that be because he was patient enough to wait for Esonica to leave her boyfriend for him?

If you're still not convinced, it's worth mentioning that Esonica has liked most of Kareem's recent Instagram posts, and even left a comment under a clip from their second date. "Fellas, make sure you tell every woman in your life that they're beautiful," he captioned the video. Obviously flattered, Esonica commented, "Awe."

And the piece de resistance? Gavin and Esonica don't even follow each other on Instagram. There may still be a few weeks left in Season 2, but consider this case closed.

More like this
Mack & Domynique Reportedly Had An "Epic" Breakup On 'Married At First Sight'
By Brad Witter
All The Clues Clint & Gina Aren’t Still Together After 'MAFS' Season 16
By Brad Witter
The Bachelor’s Christina Mandrell Comes From One Of Country Music’s Most Famous Families
By Brad Witter
Nicole & Chris Hinted They’re Still Together After 'Married At First Sight'
By Brad Witter
Get Even More From Bustle — Sign Up For The Newsletter
From hair trends to relationship advice, our daily newsletter has everything you need to sound like a person who’s on TikTok, even if you aren’t.