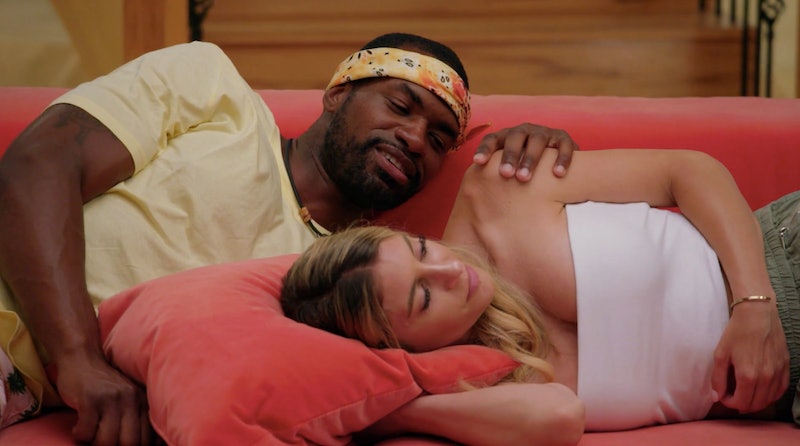 When I started sleuthing social media for clues Kate and Dom are dating after Temptation Island, I could never have anticipated what a made-for-TV journey it would be. Initially, the results weren't promising: Kate followed Dom, but he didn't follow her back, seemingly hinting that wherever their relationship stood, it was one-sided. However, I was then gifted with a reality TV twist all my own: midway through writing, I realized the number of people Dom was following had raised from 745 to 746. When I checked the following tab on Dom's page for the second time, Kate's handle was at the top of the box, indicating that he had just pressed the button.

Even more intriguing, Kate had posted a new photo in the few minutes I spent away from her Instagram page — and not only had Dom commented three fire emojis, he'd liked most of her recent posts.

Ashley Howland, one of the other Temptation Island girlfriends on the show with Kate, was quick to like Dom's comment, which makes it seem like she knows something that we don't. Alas, at the time of publication, Kate hasn't responded.

Over on Twitter, things got even more confusing. Dom follows Kate and actively tweets about their time together on the show. He also makes it a point to retweet fans praising their relationship.

Kate, on the other hand, doesn't follow Dom. She just joined Twitter in September, and only follows 11 people (including Ashley H. and the other Temptation Island girlfriends). So far, she only has three tweets, all of which are retweets of the show's official page. So it's safe to say she's not very active on the site.

Still, it's hard to imagine that she hasn't seen Dom's tweets about her.

On Nov. 15, he shared a screen grab of himself and Kate walking on the beach and looking into each other's eyes, then captioned it with the smiling emoji surrounded by floating hearts. So, he's either still pretty smitten, or really good at teasing his followers enough that they'll keep watching Temptation Island (not that you need any more reason than that it's the wildest dating show in existence).

Does any of this prove anything? Not really. But there's definitely something going on between the two. If they're not currently a couple, Dom is definitely still shooting his shot. Now all we need is for Kate to weigh in.