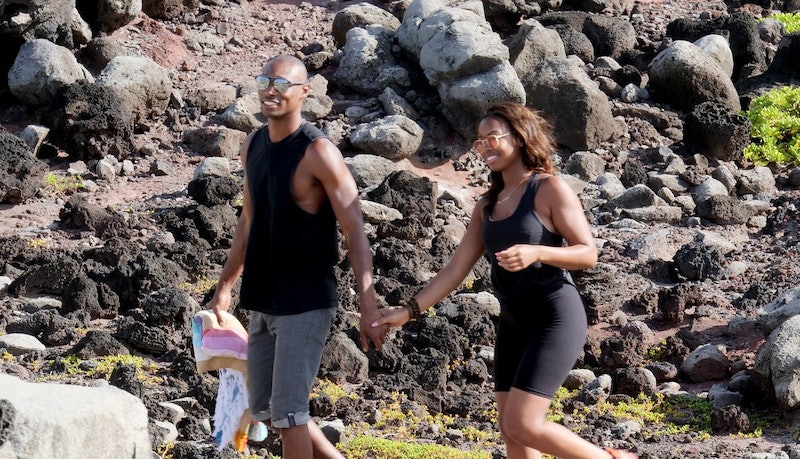 Here's what a social media deep dive reveals about Rick and Medinah from Temptation Island: if they aren't dating, they're definitely still good friends. The season — and their relationship —heated up pretty quickly after Rick's girlfriend Ashley G. slept with KB on night one. Since then, he and Medinah have slowly been getting closer, and by the looks of their tweets and Instagram posts, they may even end up leaving the island together.

On Oct. 23, Medinah shared a clip from the show on Instagram of her and Rick in the pool together. In it, she tried to get him to explore their relationship further (so far, he's been pretty hesitant, and is clearly still sorting through his feelings for Ashley). "I'm gonna go home, someone else is gonna wife me up, you're gonna see it, and then you're gonna be very sad," she told him. Most telling? One of her followers commented below the video, "Very very fkn sad." Medinah and Rick both replied with one word: "Very."

Rick then posted a separate comment on the same post quoting Medinah. "Come on Rick," he wrote with the laughing emojis. Medinah responded with the whining emoji and the same three words. Meanwhile, over on Twitter, Medinah has liked a lot of Rick's tweets and has also made some weirdly vague ones of her own.

In one, she said, "Rick is such a great guy." And in another, she wrote, "I have a triple life," which could mean she's keeping secrets about a particular relationship.

In an interview with Floor8, Medinah warned that her attempts to woo Rick have only just begun. "If the viewers think I was trying too hard to get Rick's attention now, they are in for a treat!" she said. "The show is called Temptation Island for a reason and I'll continue to do exactly that — tempt!"

She didn't say whether or not she ends up with Rick, or if the tempting paid off, but in her Nov. 7 Instagram Story, she re-posted a quote that read, "BOYFRIEND TRYOUTS TOMORROW, bring a current paystub & yo best gray sweats." That could mean she's actually single and looking for a boyfriend, or maybe she just found it funny.

As for what's happened after the show, it definitely seems like Medinah is still into Rick. What's harder to tell is if he feels the same.

More like this
Shaq Might've Spoiled His Relationship Status With Kirsten After 'MAFS'
By Brad Witter
Airris From 'MAFS' Says He Doesn’t Regret Going To Decision Day With Jasmine
By Brad Witter
Mack & Domynique Reportedly Had An "Epic" Breakup On 'Married At First Sight'
By Brad Witter
All The Clues Clint & Gina Aren’t Still Together After 'MAFS' Season 16
By Brad Witter
Get Even More From Bustle — Sign Up For The Newsletter
From hair trends to relationship advice, our daily newsletter has everything you need to sound like a person who’s on TikTok, even if you aren’t.