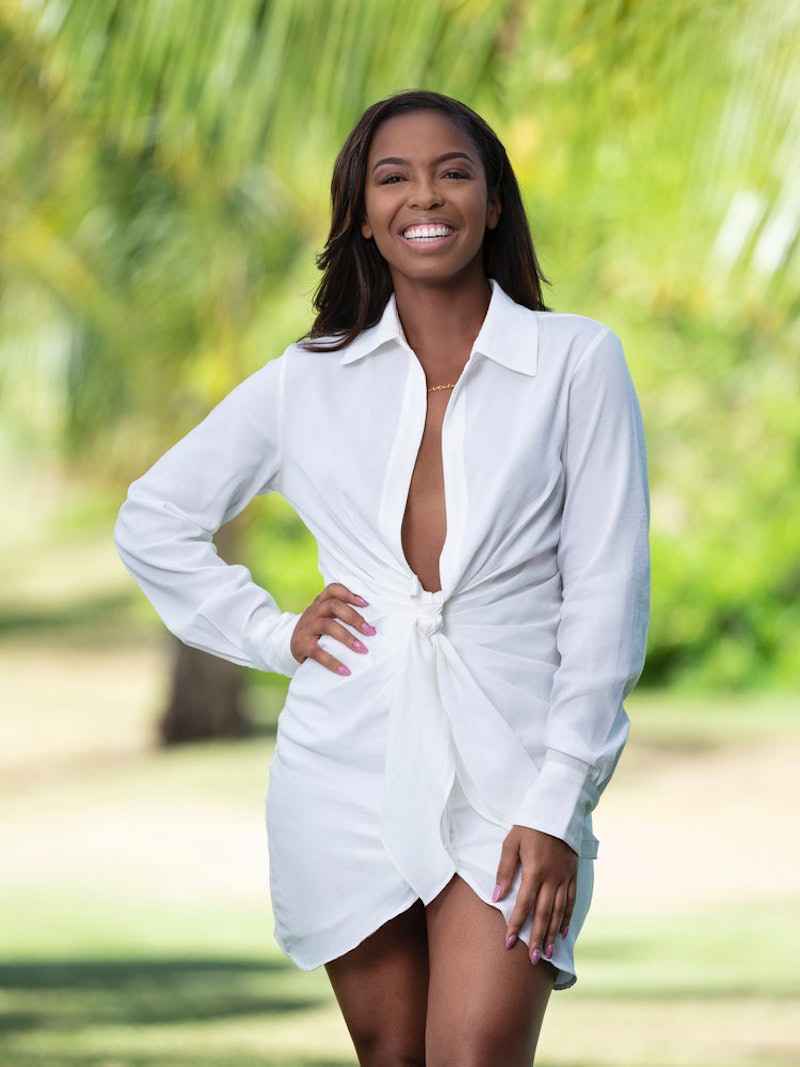 If you think Medinah is bold and outspoken on Temptation Island, wait until you see her Instagram. As one of the Season 2 singles, Medinah has been connecting with Ashley G.'s boyfriend, Rick, onscreen, and while he's been hesitant to get involved with someone, she hasn't been shy about her feelings for him. Off-camera, though, her attention has been directed toward someone else: Ashley.

On Oct. 15, Medinah shared a clip from the show in which she's flirting with Rick, trying to get him to touch her butt. "If you can't take the heat, get off the Island. I really wanna tag a certain girlfriend but I'll be good today," she captioned the post, adding an eye-roll emoji. However, Medinah's followers did tag Ashley in the comments, and she responded.

"I was summoned for this? Next time let it be about a bag and not some desperate thirst for my attention," she commented.

"Perfect! Next time you're in Atl come be a special guest on my show," Medinah replied, referring to CockTales: Dirty Discussions, the podcast she hosts about sex and dating with her friend Kiki Said So.

Ashley clearly wasn't flattered by the invite. "You don't need my co-sign on your greatness - you're good. I'm good. We're good," she wrote, capping it off with the peace sign emoji.

Since those comments were posted, Ashley has set her Instagram page to private. On Oct. 18 — the morning after the episode aired in which she hooked up with KB — she tweeted asking everyone to stop flooding her inboxes with hate. "Just woke up... phone flooded with messages," she wrote. "Watch the show and let me live!"

On Oct. 24, Medinah shared a satirical shady video from Real Bros of Simi Valley that egged on her rivalry with Ashley. "Lmao I am dyingg!" she wrote. "This is me and Ashley at the reunion."

As pointed out by Bustle writer Marenah Dobin, this isn't the first time Marenah has tweeted about Ashley. In fact, the two have shared a few spicy exchanges on the site.

Back on Instagram, Medinah shared a preview clip of her time with Rick ahead of the Oct. 24 episode. They're in the pool, she's trying to tempt him, and he's clearly uncomfortable and still trying to process the fallout of his relationship with Ashley. "Raise your hand if you think Rick is scared of Medinah," she wrote under the post. "If you know me you already know it's hard for me to bite my tongue call me what you want but you'll always know wtf I'm thinking."

What is unclear is what Rick is thinking, and how his and Medinah's relationship will unfold. But the two do follow each other on social media, and have interacted briefly. Rick commented flame emojis on an Aug. 27 picture of Medina and her friends. Medinah didn't reply. It sounds like she has big plans for the reunion, though, so the fate of this complicated love triangle will be revealed soon enough.

More like this
This Pre-'Love Island' Video Of Olivia & Zara Together Changes Everything
By Bustle UK
David Schwimmer & Gemma Collins Join 'Celeb Bake Off' & Twitter Can't Cope
By Sam Ramsden
Twitter Has Renamed Ekin-Su After *That* 'Dancing On Ice' Performance
By Sophie McEvoy
'Love Island' Has Added Yet Another Bombshell To The Villa
By Bustle UK
Get Even More From Bustle — Sign Up For The Newsletter
From hair trends to relationship advice, our daily newsletter has everything you need to sound like a person who’s on TikTok, even if you aren’t.