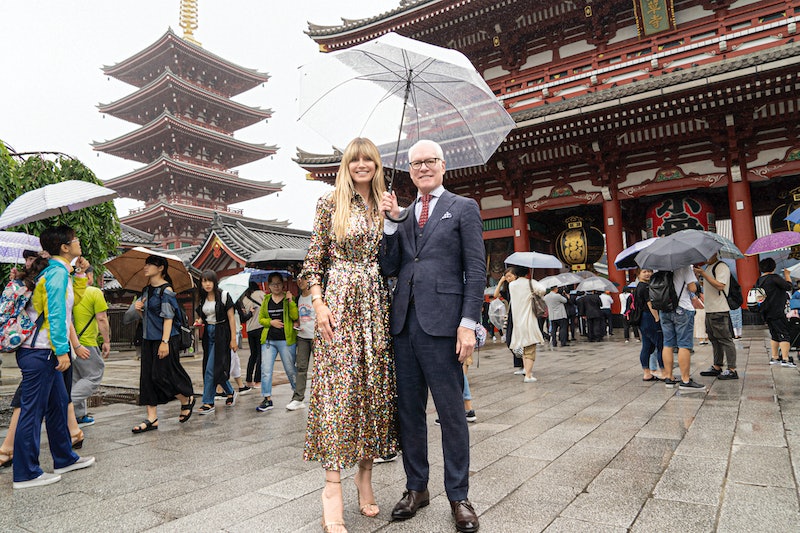 Heidi Klum and Tim Gunn's new Amazon show, Making the Cut, has a lot in common with Project Runway. Both are reality competition series in which designers compete for a large prize that can kickstart or significantly boost their existing careers. And both projects feature Gunn and Klum. There are, however, a number of small but important differences between Making the Cut and Project Runway.

Entertainment Weekly's Kristen Baldwin said it best when she described Making the Cut as "Project Runway with Amazon money." Not only does the winner receive $1 million in place of Project Runway's $250,000, but they also have the chance to sell their collection on Amazon. "We always were a show that never had the biggest budget," Klum said at the same TCA panel. "When you have a bigger budget like Amazon, you get to go to Paris and Tokyo and the designers get to inject this creativity." Which leads us to...

Rather than staying in New York, Making the Cut takes the contestants to fashion hotspots like Paris, New York, and Tokyo.

On Project Runway, the designers often have to scramble to make their garments themselves, regardless of their sewing experience. But per Variety, each designer on Making the Cut is given a seamstress, who does not help with the design but does assist in the construction. They chose to add this component because, as Gunn pointed out, "that's how it's done in the real world."

Making the Cut also puts more of an emphasis on business and branding, including making the winning designs available to buy on Amazon after each episode. "This is no longer a sewing competition," Klum told Variety in a separate interview. "We're looking for a great brand, so they have to have a business mindset along with their creativity."

As for whether all these changes do enough to set Making the Cut apart from Project Runway...that judging goes to you.

More like this
Everything To Know About The 'Daisy Jones & The Six' TV Series
By Maxine Harrison and Brad Witter
This 'Bachelor' Contestant Had The Best Reaction To Wearing The Same Dress As Another Woman
By Grace Wehniainen
Everything To Know About 'The Real Housewives Ultimate Girls Trip' Season 4
By Jake Viswanath
Andy Cohen Apologized To Larsa Pippen After A 'RHOM' Season 5 Reunion Dust-Up
By Brad Witter
Get Even More From Bustle — Sign Up For The Newsletter
From hair trends to relationship advice, our daily newsletter has everything you need to sound like a person who’s on TikTok, even if you aren’t.