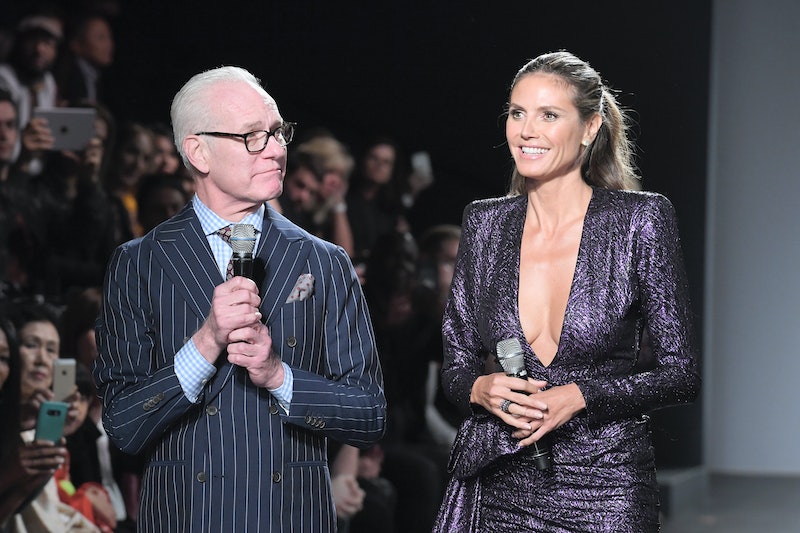 As they say in fashion, one day you're in and the next you're starring in a brand new Amazon Prime series. Shortly after the finale runway show was filmed in Paris, Amazon released details about Heidi Klum and Tim Gunn's new fashion TV show, Making the Cut, which is set to premiere on the streaming service in 2020.

According to E! News, the show will focus on 12 entrepreneurs and designers from around the world, who are looking to "take their brands to the next level and become a global powerhouse." And if you've ever watched Project Runway and wished you could wear some of the winning designs in real life, Making the Cut is the perfect show for you, as selected looks from the series will be available to buy online, thanks to Amazon Fashion. In addition to gaining an audience directly interested in buying their pieces, the winning contestant will also receive $1 million, to invest back into their business.

Klum celebrated the new project on Instagram on Wednesday, June 26, by sharing a video of herself and Gunn walking down a runway hand-in-hand, while the Eiffel Tower is illuminated in the background. "@timgunn and I are so excited to to be filming our new @amazonprimevideo show #MakingTheCut in Paris!" the model turned mogul wrote, adding that the show is "#comingsoon."

Before the contestants reach that final runway show, however, they'll have to impress Making the Cut's judging panel of fashion icons: designer Joseph Altuzarra, former Vogue Paris editor-in-chief Carine Roitfeld, Nicole Richie — who runs the fashion brand House of Harlow 1960 — and supermodel Naomi Campbell, who is also an executive producer on the Amazon series.

Back in October, Klum explained that the main difference between Making the Cut and Project Runway — which she hosted for 16 seasons — is that the Amazon series is primarily focused on "trying to straddle the artistry of fashion design and the commerce part of it." Speaking with The Hollywood Reporter, Klum continued, "When you're online and you're watching your favorite show, which is hopefully going to be ours, you'll have the commerce aspect for the first time."

"When you see a design that you actually love, you can buy it," she added. "It's not only great for the consumer, but it's also amazing for our designers. We never had that aspect where we could actually help the designers to really branch out into the real world like this on Project Runway."

Klum and Gunn announced their decision to leave Project Runway in September, as the series prepared to move from Lifetime back to its original network, Bravo. "After 16 incredible seasons, I am saying 'Auf Wiedersehen' to Project Runway, a show that I was honored to host and help create," Klum said in a statement released at the time. "I am incredibly proud of the show, and it will always have a special place in my heart."

Gunn echoed those sentiments in a statement of his own, and credited Project Runway and its fans for helping to create new opportunities for him in the world of fashion. "I am grateful to Project Runway for putting me on a path I never, in my wildest dreams, thought my career would take me!" the iconic mentor explained. "I am so proud to have been a part of the groundbreaking process that showcased talented young designers as never before."

While fans will likely have to wait a while longer to see Klum and Gunn return to the runway once more, it does sound as if Amazon Prime is determined to break down the wall between the contestants of Making the Cut and the audience. Just make sure to clear some room in your closet before the show premieres in 2020.