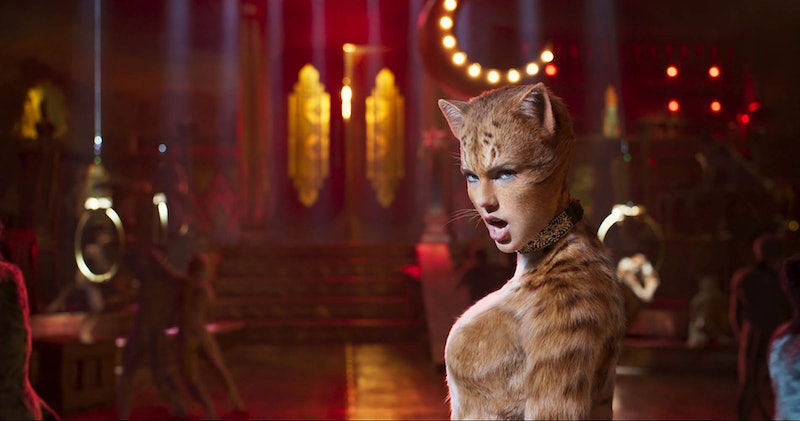 The film adaptation of Cats is finally here, for better or worse, and there's many questions to be answered. After seeing the movie, audiences familiar with Andrew Lloyd Webber's iconic musical and those experiencing the surreal nature of this feline world for the first time will both leave the theater a little confused. That's partly due to the nature of the musical itself (Cats definitely raises a lot of questions). But it's the differences between Cats the movie and the original musical that will have many fans leaving the theater a bit perplexed.

There aren't too many differences between the show and the Cats movie. After all, the musical has existed for almost 40 years, and therefore has a solid fanbase that might be disappointed to see their beloved musical take on a whole different tone. In keeping with fans' expectations, the plot and most characters, like Jennifer Hudson's Grizabella, James Corden's Bustopher Jones, and Ian McKellan's Gus the Theatre Cat remain the same. However, other characters, like Taylor Swift's Bombalurina and Judi Dench's Old Deuteronomy, have been tweaked for the big screen. Not to mention the biggest change of all, the star of the show, Victoria (newcomer Francesca Hayward).

Viewers see the world of Cats through the eyes of Victoria, a new feline in town. But in the original musical, Victoria is basically akin to a background ensemble dancer, though she does have a show-stopping ballet solo. In the film, however, Victoria has her own backstory and a full-on journey as she bonds with the Jellicle cats and forms an emotional connection to Grizabella. In fact, Victoria's arc is the closest the film comes to a proper storyline. So while not true to the musical, her expansion was necessary to turn the stage show into a motion picture.

Not only does Swift's character have more limited screen time in the film (her musical number is fabulous, but it's her only scene), but her outlook on life is a little different. On stage, Bombalurina is as sultry and confident as Swift portrays her, but — spoiler alert — she's not aligned with Macavity (Idris Elba) at all. In fact, she despises him, and her musical number about Macavity is more of a warning, rather than a tribute to his greatness. Also in the original musical, Bombalurina takes part in multiple musical numbers and is inseparable from her BFF Demeter, who is nowhere to be seen in the film.

Given that Victoria's role in the stage production is not nearly as big as in the new movie, you may have already guessed that her big musical moment in the movie, "Beautiful Ghosts," wasn't actually in the show either. The song was written by Swift and Webber specifically so that Victoria could have an emotional breakthrough moment in the film. The show-stopping track was so effective that it landed the songwriters a Golden Globe nomination for Best Original Song.

Dench's Old Deuteronomy is the wisest and most gracious cat seen in the film, making her the natural leader of the Jellicle cats. But in the stage production, Old Deuteronomy is actually a male feline. Hooper decided to change the gender of the most senior cat because he only wanted Dench in the role. "It’s the same spirit, the same old cat," Dench told USA Today in April 2019. "Different gender."

Doing a film adaptation of Cats allows for a lot more flexibility than a stage production would, and Hooper takes full advantage of that. While the musical is basically entirely set in one room, the film takes advantage of creating multiple locations in 1930s London. Far from taking place just in one room, Cats is full of extravagant sets with storefronts and theaters straight out of T.S. Eliot's wild imagination. Frankly, it's a cats' paradise, and it's dazzling to see.

They might not seem like major changes, but the differences between Cats the movie and Cats the original musical are enough to take the story from stage to screen.