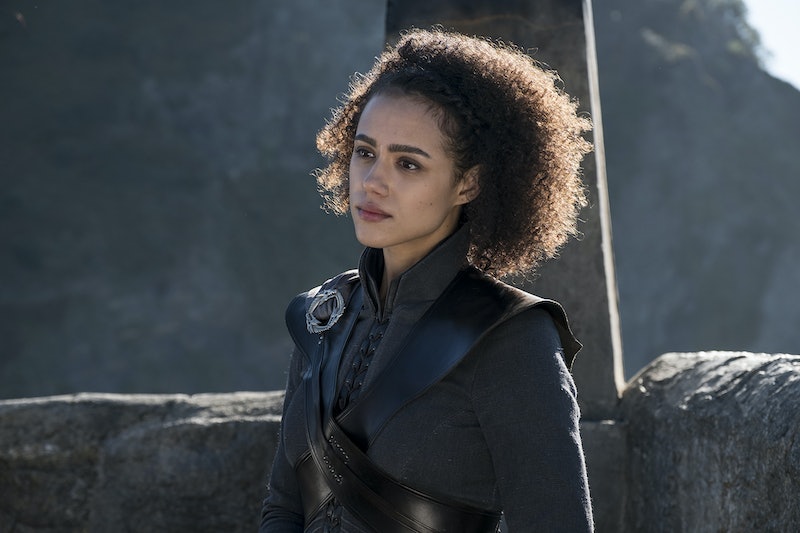 Macall B. Polay/courtesy of HBO
By Leah Marilla Thomas
May 24, 2017

Stop everything, we have a new Game of Thrones Season 7 trailer to devour. "The great war begins," and we're in for a lot of battles in the HBO series' penultimate outing, with lots of horses and lots of maps. There is plenty of both fire and ice but winter is finally here, Daenerys has made it to Westeros, new alliances have formed, and House Lannister is taking what is probably a last stand.

Earlier this week fans learned that Game of Thrones Season 7 will move faster than previous seasons in terms of pace. With so many major characters finally able and willing to wage war, this is not surprising. The new trailer puts that in action immediately. I'm already shocked to see Lannister troops fighting the Unsullied already. The trailer also puts women front and center. Melisandre is on her own, Arya has a cool horse, and what started as the "War of the Five Kings" now has as least two Queens.

I can't tell by looking at him whether Jon Snow knows who his mother and father are, and there aren't any White Walkers or wights in the trailer, but the threat is certainly real and there are plenty of clues about what's to come. Watch the new footage below, and then let's get to speculating.

Most of the Houses and locations on the map during Cersei's initial narration about having enemies everywhere are familiar to fans — House Arryn at the Vale, and Castle Black. However, "Duskendale" shows up representing the East. This port town between King's Landing and Dragonstone could become important.

Cersei's Not Messing Around

I'm not surprised that when the Lannister finally has her chance to be a war strategist, she goes all out and commissions a map she can stand on. How much do you wanna bet she pretends to be Godzilla when nobody's watching?

It's what she's waited for since birth. I hope her true home doesn't disappoint.

Who is she watching? Where is she? That is a wall but based on the running water I don't think it can be the Wall. Something to the South has caught her attention.

Could Sansa Be Jon's Hand?

I'd love that, and if Winterfell insists on potentially dooming him with the "King of the North" title, it's the least Jon can do.

Oh, please don't let this be that storyline from the books.

Someone Else Is Watching

Who is that. He kind of looks like a Tully, but it's hard to say. Maybe it's a flashback. Maybe it's Howland Reed, witnessing Jon's birth.

Jon Snow Is Over Littlefinger

I had to make this one a gif because I can't stop watching it. Finally! I wonder what Littlefinger could have done to enrage Jon — it could be literally anything.

Someone Lends A Hand

Gendry? I'm just kidding, I have no idea whose bloody hand this is.

I was kind of hoping for Yara and Daenerys, but Ellaria is cool too.

Who's knocking down a Lannister lion? Is Cersei's regime that short-lived?

The trailer also hints — well, Davos states it pretty plainly — at the need for unity in Westeros against the White Walkers. With multiple factions still at war, this might be difficult to achieve. However, as Game of Thrones Season begins and this epic saga starts nearing to a close, it'll be interesting to see if these characters can put the Iron Throne behind them and band together.