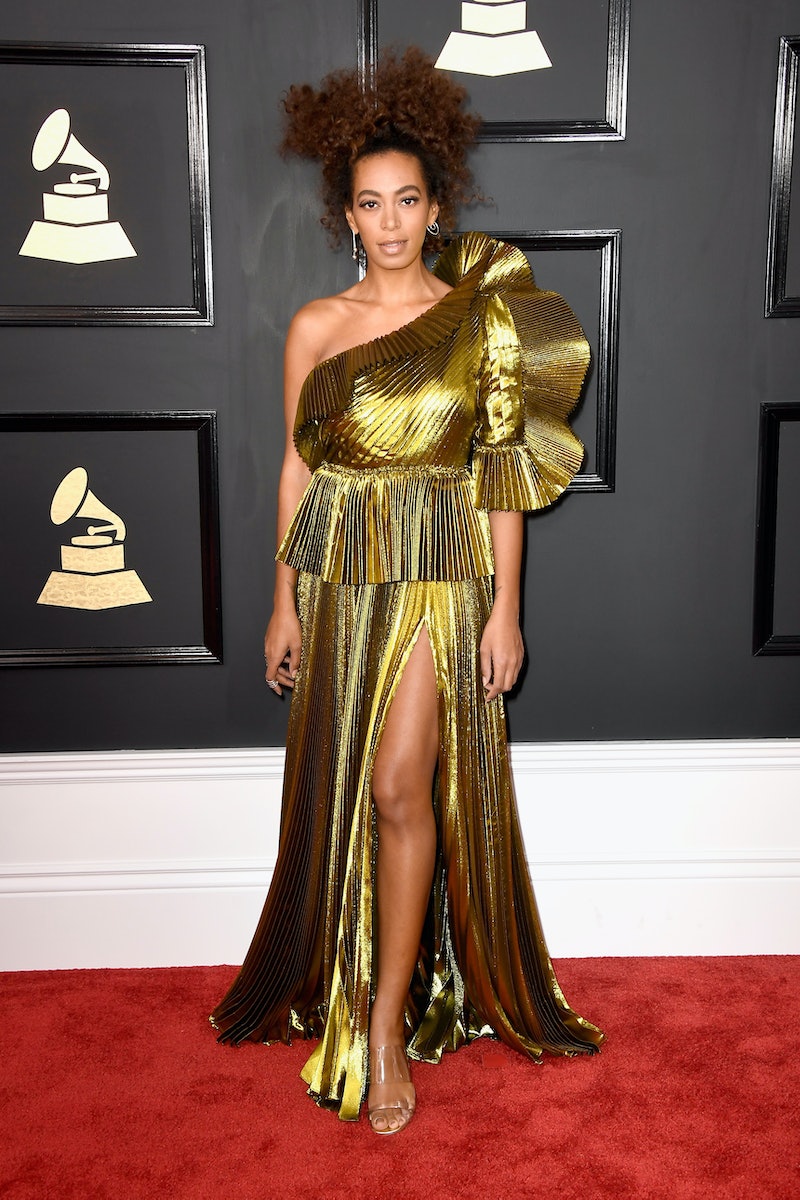 You might assume that all red carpet fashion is created equal, but don't be fooled: The 2017 Grammys red carpet is all about serving serious style, just like the Grammys that came before it. After all, the Grammys red carpet is the place that brought us Jennifer Lopez's iconic plunging green gown in 2000, Rihanna's hot pink puffy gown that launched a thousand memes in 2015, and Lady Gaga's wild Bowie-inspired ensemble in 2016. Simply put, the Grammys are a place where celebs show up to serve, and all music fans can do is sit back and soak it all in.

The 2017 Grammys red carpet won't disappoint, even if just by virtue of the confirmed guest list. According to E! Online, seats have been reserved for Beyonce and Jennifer Lopez, along with The Weeknd, Demi Lovato, and Rihanna. Stars like Alicia Keys, Adele, and Lady Gaga are also set to take the stage. Of course, before the show goes down, these stars all theoretically have to walk to red carpet, which means that we get to see them dressed in the Sunday awards show finest. Here's a rundown of exactly who was wearing what at the 2017 Grammys — fashion lovers, prepare to have your minds blown.

The queen looks amazing in this olive green pleated gown.

The classic man in his classic red carpet silhouette.

Skrillex opted for a subdued, casual look this time around.

The singer is a vision in hunter green on the Grammys red carpet.

Klum slayed in a micro mini and incredibly tall platforms.

The daughter of the King of Pop looked incredible in this glittering Balmain jumpsuit.

The world-renowned DJ/producer looked handsome with two little guys on the red carpet.

The singer already won a 2017 Grammy for Best Dance Recording, and she looks amazing in this short black Balmain frock.

The singer is dressed like an adorable fairy flower queen, and it's hard not to smile when you see this dress.

The two hip hop stars are looking dapper AF tonight — and Yachty's pop of color on the teeth is kind of dope.

The Weezer frontman looked dapper in a polka dot tie and a corresponding pocket square.

Talk about a blast from the early '00s past, right?

The "Panda" singer looks about as happy as a person can be on the red carpet.

The powerhouse singer is rocking a grey checked pantsuit on the red carpet.

Tinashe is all about the cleavage and cutouts, and she looks amazing.

The actor and singer is wearing a coordinating two-piece gown, and the overall look is pretty dramatic.

The country music stars brought their most glamorous looks to the red carpet. Pope's Julia Clancey gown has a unique plunging cowl neck and is fully of sparkle.

The comedian showed up on the red carpet in a mostly-black ensemble and casual shoes.

The legendary R&B singer looks amazing in an outfit that totally goes with the red carpet she's standing on.

The singer opted for an unconventional silky jacket and wide leg pants in lieu of a dress, and it's kind of rad. She also perfectly accessorized with a necklace and earrings from IPPOLITA.

The crooner and his date looked absolutely ravishing together.

The singer and creative icon showed up on the red carpet with a full face (and body) of gold. Keep shining, Ceelo.

The E! Live From The Red Carpet host went for something short and sweet for tonight's festivities.

The host of the 2017 Grammys looked dapper on the red carpet.

The country singer brought his classic style to the carpet this evening.

This crew is all of the plum-toned squad goals.

The rapper brought his A-game (and his incredible shimmering navy tux) to the red carpet.

The pop star wore something unlike anything else on the carpet tonight.

Demi went for total glamazon vibes for the Grammys this year.

Jenny from the block opted for a pale pink plunging gown with a bold tulle collar for tonights festivities.

This squad always brings their best to the red carpet, and tonight is no different.

The actor and singer looked low-key glam on the red carpet.

Laverne Cox was all about the side splits and a dramatic cut crease this evening, and she is slaying.

Mother Monster showed up in an incredible ensemble and what looks like a "let's do this" attitude. Loves it.

The queen of all things ballad did not come to play in this dramatic green gown.

The ever-adorable hip-hop artist in a heather grey suit will put a smile on your face.

Solange brought some serious golden confidence the red carpet, and she looks like a dream.

The soulful singer brought his usual amount of swagger to the building tonight.

Henson was a ray of purple sunshine in this unusual embroidered mini dress.

Hollywood legend in the making and E! Live From The Red Carpet host looked handsome in his ensemble — and how cool is that jacket?

Rihanna showed up after the show already began, but her incredibly red carpet look fully makes up for it. Bow down to the baddest gal, because she is queen.

The actor showed up looking like an industrial goth babe, and it's worth a second look.

Another year, another Grammys, and another reason to tune into the red carpet next time.